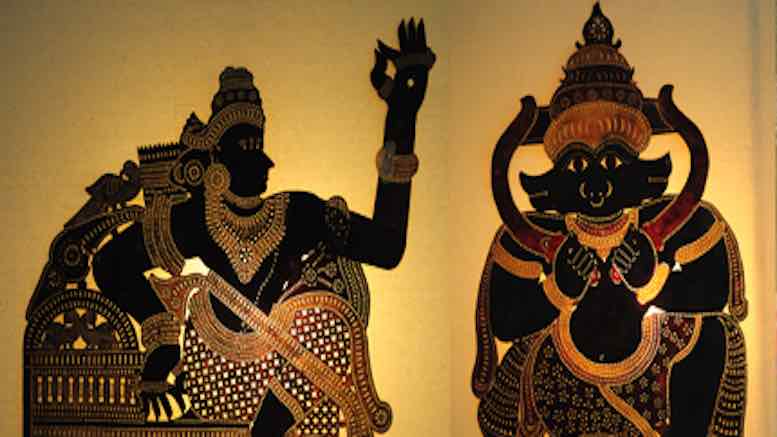 The oil lamps flicker in a surreal glow casting muted ochre shadows on the white cotton cloth screen. Against this online proscenium, which served as the koothu madam or theatre,  the percussive melody  of the  ezhupara (a cylindrical drum made from the jack fruit tree with both ends covered by calf skin), chenda, madalam (drums), shanku (conch), Ilathalam (cymbals), chengila (gong) and  kurum kuzhal (a wind instrument) punctuate the stillness…as the tinkling of the chilanka (belled anklets) rises to a crescendo, the stage is set for Tholpavakoothu (shadow leather puppetry) performance based on episodes from the Ramayana.

The voice of the narrator (that sounds like a blend of Tamil and Malayalam) blends with music  as  the actors hidden  behind the screen begin to flit across, their filigreed silhouettes dancing tantalisingly on the screen…  Shining like stars with muted hues, they flit across the screen, manipulated  by the invisible puppeteers…

The cry of the peacock, the song of the nightingale, the growl of the lion, the gambol of deer the  hop scotch of the hare, the lion ambushing its prey… we are in Panchavati forest, where we witness the maan vettai (hunting the deer) by Sri Rama,  Seetha apaharanam  (Seetha’s abduction), the battle with Jatayu, Ravana vadam (the killing of Ravana), culminating in Rama pattabhishekam (Rama’s coronation).

The artistic exuberance was a Tholpavakoothu performance, anchored by the father-son duo Shri Vishwanatha Pulavar, 57, and Shri Vipin Pulavar, 28, and  their team of artistes. The traditional art form blends ritual and moral instruction through entertainment.

“Tholpavakoothu (thol: leather, pava: puppeteer,  koothu: performance) is the traditional art  form of shadow leather puppetry practised in Kerala  that is believed to be more than thousand years old. It is based on the Kamba Ramayanam (Kamban was a Tamil scholar and poet who wrote the Ramayana in Tamil),” says Shri Vipin Pulavar.

The fifteenth generation in  a family of Tholpavakoothu artistes, Vipin’s father Vishwanatha Pulavar established the Tholpavakoothu Sangam, based in Palakkad, Kerala, an institute for the research, training and performance of this art all over the world.

Vipin Pulavar traces the origin of the Tholpavakoothu to a story that dates back to a  battle between the devas and asuras. The asuras were decimated in a battle with the devas and only four of their women survived. One of them, Dhanampathy, performed intense penance and received a boon from Brahma. She was blessed with a son Dharikasuran, who was  formidable, fortified by Brahma’s  boons. One of them was that he could be killed only by a woman who had the blessings of Brahma.

Unable to control his havoc, the devas approached Shiva, who sent his daughter Bhadrakali, who was blessed at birth by Brahma, to  kill him. True to the promise, she beheaded him and presented his severed head to Shiva. However, this epic battle coincided with the epic battle between Shri  Rama and Ravana.

Bhadrakali  was disappointed  as she too had wanted to witness the epic battle between Sri Rama and Ravana. When she expressed her disappointment to Shiva, he advised her to go and reside in Parasurama kshetram (modern Kerala) where  artistes would enact for her stories from the Ramayana in temple premises.

“Tholpavakoothu traces its origins to more than 2000 years back. Its origins lies even further in the mists of time. The stories were written in Sanskrit then and the art was known as Olapavakoothu or palm leaf puppetry. However, since the last thousand years, we draw our primary source for narration from the Kamba Ramayanam,” explains  Vipin Pulavar who  has two Masters’ degrees in English and Social Work.

The Tholpavakoothu puppeteers are known as Pulavar, a Tamil word that means scholar.   The  person who leads the performance is an accomplished scholar with a deep knowledge and understanding of traditional knowledge systems such as Shastras, Puranas, Ithihasa, Jyothisha (astrology) and Ayurveda, narrative skills in delivery and diction and expertise in manipulating puppets. A unique feature of this art form is that the koothu madam or  the performance space is dedicated exclusively for the art and not  used for other purposes.

The puppets are created by the master puppeteers themselves. According to Vipin Pulavar, the puppets, originally made from deerskin, are currently being made from hide of goats and oxen. Vipin’s mother Smt. Gomathi crafts puppets— she was initiated into the craft of making puppets by her father in law, the legendary Shri Krishnan Kutty Pulavar. Incidentally, Vipin too has expertise in the various skills associated with the performing art, including making the puppets.

“We remove the hair, process the leather and  then paint the form of the character. The figure is then cut, shaped and contoured using special tools such as the chisel. Artistically placed perforations enhance the visual effect and the puppets are painted using vegetable dyes  based on guidelines prescribed in ancient manuscripts. The thicker skin used today cannot be made translucent. Hence today we use stark black filigreed silhouettes and not the coloured shadows thrown by translucent figures. They are mounted on bamboo shafts that act as support for the flat figures and allow the puppeteers to manipulate them,” explains  Vipin.

Once widely performed across Kerala, winds of change have eroded the art form. Currently, it is being practised only in 70 temples in the state. It  is the hereditary art form of a few Pulavar families who are the torchbearers of the ritualistic art form dedicated to Bhadrakali, the Mother Goddess.

“I was immersed in shadow puppets right from childhood. My grandfather Shri Krishnan Kutty Pulavar, a widely regarded shadow puppeteer was my first guru. In fact, when I cried as a child, my mother would sing Tholpavakoothu songs to comfort me!” recalls Shri Vipin.

Vipin is a versatile Tholpavakoothu artiste who can sing, play musical instruments, narrate and manipulate the puppets— the last one being his  favourite in  the repertoire as it demands dexterity and focus.

Besides traditional  Tholpavakoothu performance, Vipin and his team also use the art form to create awareness about contemporary issues such as COVID-19 and  HIV/AIDS . Besides, the team, in collaboration with Russian Mohini Attam artiste Irenea Mihalkovich has created a blend of Mohini Attam and Tholpavakkothu  and termed it Pavanattam.

An experimental art form, Pavanattam blends Tholpavakoothu and Mohiniattam. The  song visualizations were done through Tholpavakoothu;  the dance, choreography, and all other aspects  of the dance  was done by Irena Mihalkovich, while puppetry was by Viswanatha Pulavar and team.

The making of a Tholpavakoothu artiste is a long and arduous journey.

“You learn by being immersed in the art form. The artistic journey involves kandaravu (watching the performance), ketaravu (learning), kondaravu (experience) and kuduthuaravu (offering),” says Vipin Pulavar as he signs off with an artistic flourish.