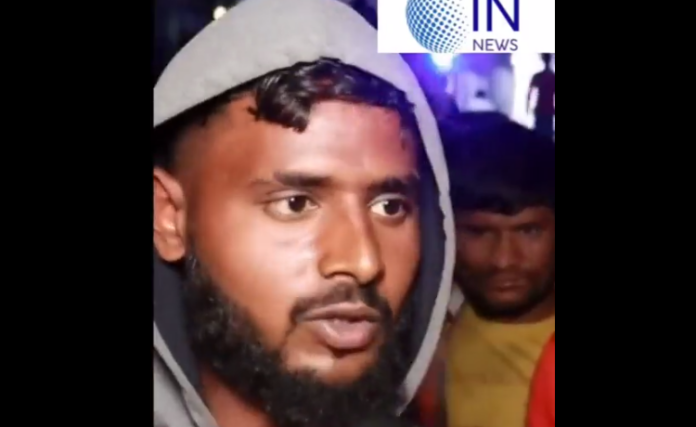 The brutal and cold-blooded murder of Shraddha Walker by Aaftab Poonawala has made everyone in the country sit up to twin threats. The first of Muslim men, fed on a steady diet of Islamist indoctrination, preying on non-Muslim girls (and anyone not covered in hijab/burqa) as nothing more than a piece of meat. The second of growing degeneracy due to promotion of live-ins, promiscuity and child sexualization in Urduwood (aka Bollywood) and West-influenced pop culture.

Reactions to the case have ranged from mainstream media’s whataboutery and downplaying of the grisly, well-planned murder as a routine ‘crime of passion’, to sickening celebration and rationalization of Aaftab’s act by Islamists on social media.

A shocking video has now emerged showing a youth named Rashid Khan from Bulandshahr, UP talking to a reporter, and justifying Aaftab’s butchery.

“If a man’s mood is not right, why just 35, he can chop (a woman) into 36 pieces too,” says Khan. When the female interviewer asks him where he is being trained in such thoughts and deeds, he says, “What training, just take a knife and start doing this (makes stabbing motions).” When she asks if has experience of such crimes, he says, “Yes, I have experience..if someone argues with me, I will cut them up…(unintelligible, sounds like ‘if someone breaks friendship’).”

The interviewer then asks whether he thinks Aaftab did the right thing by murdering Shraddha, to which he replies, “Could be a mistake or the right thing…he didn’t chop into too many pieces, just 35….they both (Shraddha and Aaftab) might have made a mistake.”

Such attitudes will not surprise those who follow the sickening regularity with which brutal Islamist crimes on Hindus occur across the nation. This ground reality is the complete opposite of the ‘dara hua Musalman’ (scared minorities) rhetoric and narrative peddled by left-liberal elites and Islamist ‘fact checkers’ like Md. Zubair.

Due to the dogged persistence of a new breed of social media activists and journalists like Swati Goel Sharma and Subhi Vishwakarma, we now have recorded testimony of dozens of cases where Hindu girls have narrated horrific experiences of sexual assault, dehumanization and brutality faced by them after marrying Muslim men who pretended to be Hindu. Likewise, many Muslim youth have been caught spewing their toxic views on Hindus and open threats to rape and violate Hindu girls.

One 2018 case from Ghaziabad, UP where a 10-year-old girl was held captive in a madrassa and raped, demonstrated the utter depravity of the Islamist and neo-Ambedkarite mindset which is spreading at a dizzying rate. Terming the rape victim as a ‘bhabhi’ (sister-in-law), social media handles were promoting the hashtag #JusticeForGeetaBhabhi, demanding the minor child be married off to her Muslim rapist.

In Shraddha’s case too, there has been an exhibition of the sick and deep radicalization of subcontinental Muslims that inures them to pain of others, especially Hindus. See this twitter thread by @thehawkeyex who has compiled some of the most disgusting posts on Shraddha’s murder, including a Facebook page “Aftab Poonawalla Fridge Posting” reportedly created by a Pakistani woman Syeda Fatima-

Sadly, degeneracy and deracination has seeped so widely in Bharatiya society that some Hindus too are following that psychotic FB page.