A pocket of intense Muslim presence and growth in Uttar Pradesh

There is a large and densely populated pocket of Muslim dominance in West UP.  This pocket comprises eight districts in the northwest part of UP and the adjoining district of Hardwar in Uttarakhand; it accommodates 30 percent of the Muslims of UP and nearly half of the Muslims of Uttarakhand. Total number of Muslims in this pocket is 1.23 crore, which is more than the number of Muslims in Assam and is comparable to Maharashtra.

Muslims now form 41 percent of the population in this pocket; this is nearly 2 percentage points above their share of about 39.2 percent in 2001. Longer time-series data is available for a slightly larger area that includes at least one more adjoining district; the share of Muslims in this area has risen by more than 10 percentage points since Independence and Partition. They formed less than 30 percent of the population in 1951. Of the accretion of 10 percentage points in the share of Muslims since 1951, more than nine have been added in the four decades after 1971. It puts this pocket among the regions of sharpest growth in the share of Muslims in Bharat. Incidentally, 1971 seems to mark a turning point in Muslim growth in many parts of Bharat.

Outside this pocket, Muslims have a considerable presence in some sub-districts of Bahraich, Sharawasti, Balrampur and Sant Kabir Nagar districts of UP. In the earlier decades, the share of Muslims in this eastern belt bordering Nepal was also growing rapidly; but their growth in this part seems to have become more moderate during the last couple of decades. The growth in the northwest pocket in the vicinity of Delhi, however, remains very robust.

The West UP pocket of high Muslim presence

UP accommodates 22 percent of all Muslims in Bharat

Of 17.22 crore Muslims counted in Bharat in 2011, as many as 3.85 crore, forming 22 percent of all Muslims, are in Uttar Pradesh. But, Uttar Pradesh, often abbreviated as UP, is very large and densely populated; it accommodates 16.5 percent of the total population of Bharat. The share of Muslims in UP is certainly higher than in Bharat as a whole; they form 19.26 percent of the population of the State and only 14.23 percent of Bharat. Within UP, Muslims are particularly concentrated in a few districts, while their presence in many other districts, especially in the southwest is considerably below the average of the State.

They are particularly concentrated in eight districts of the northwest

As seen in Map XXI-I below of the share of Muslims in the districts, the most intense of the pockets of high Muslim presence in UP comprises eight contiguous districts of Saharnpur, Muzaffarnagar, Bijnor, Moradabad, Rampur, Jyotiba Phule Nagar, Meerut and Bareilly. These districts lie in the northwest of the State and are in the near vicinity of Delhi. Hardwar, which was carved out of Saharanpur after 1981, forms an integral part of this belt and has a similarly high and growing presence of Muslims. This pocket accommodates 30 percent of the Muslims in UP

As seen in the Table above, share of Muslims in the UP part of this pocket has risen by 2 percentage points in the last decade, from 39.5 percent in 2001 to 41.4 percent in 2011. Their share has increased by more than one percentage point in each of the eight districts in this pocket and also in Hardwar. The quantum of increase has been relatively higher in Saharanpur and Muzaffarnagar districts. Later, we shall see that Muslims in this belt have been experiencing a high level of accretion to their share for several decades now.

It is difficult to obtain long-term data for the nine current districts that form the northwest pocket of very high Muslims presence. Many of the districts in the region, and even several sub-districts, have been reorganised several times in the recent past. The area of Saharanpur (including Hardwar), Muzaffarnagar, Bijnor and Moradabad (including Jyotiba Phule Nagar) remains more or less unchanged, though while carving out the new districts of Jyotiba Phule Nagar and Hardwar, some villages have been taken from Moradabad and Bijnor and added to Saharanpur. Rampur and Bareilly districts have remained largely unchanged. Meerut is the most difficult to deal with. Ghaziabad was carved out of Meerut after 1971 and Baghpat was separated from Meerut after 1991. We can get the time-series data from 1971 to 2011 for Meerut plus Baghpat. For the period prior to that we shall have to include Ghaziabad; but that district has been reorganised while creating Gautam Buddha Nagar by taking parts of Ghaziabad and Bulandshahr. This means that we must add Meerut, Baghpat, Ghaziabad, Bulandshahr and Gautam Buddha Nagar in order to get long time-series data. This would make the exercise meaningless. Therefore, we have added only Meerut and Baghpat. This makes the time-series accurate for 1971-2011. For the earlier period, we make the not too unreasonable assumption that the share of Muslims in undivided Meerut, which included Ghaziabad, was similar to their share in the area that now constitutes Meerut and Baghpat. 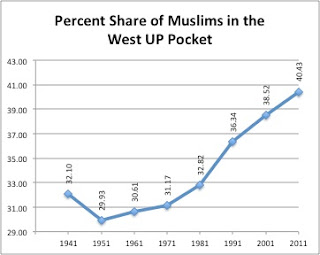 The rise has been mainly after 1971

The growth of Muslims was subdued in the pre-Partition period

In Map XXI-II below, we have shown the share of Muslims in the sub-districts of the pocket of high Muslim presence in northwest UP that we have been discussing above; some of the districts and sub-districts in the immediate vicinity of this region have also been added for the sake of completeness and comparison. 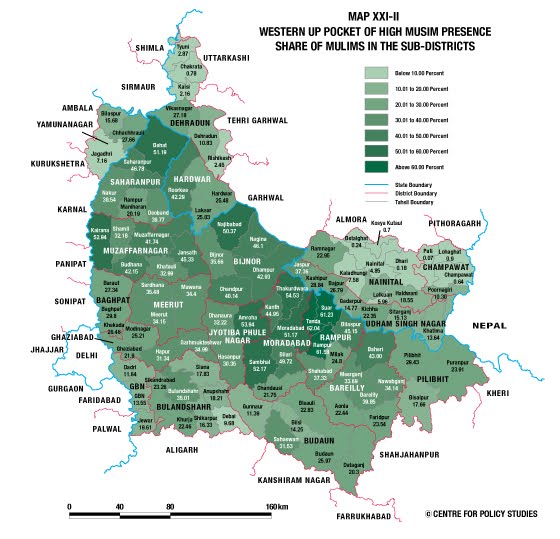 Muslim dominance is more marked in the sub-districts

Muslim presence is high in some of the neighbouring sub-districts

The share of Muslims is above 30 percent in another 5 sub-districts in the vicinity of this pocket. These five include Hapur and Garhmukteshwar of Ghaziabad, Bulandshahr of Bulandshahr, Sahaswan of Budaun and Jaspur of Udhamsingh Nagar in Uttarakhand.

Share of Muslims in the towns of the West UP pocket

Muslim share in urban areas is higher in eight districts

Share of Muslims in the urban population of Hardwar

Unlike in the eight districts of Uttar Pradesh, in Hardwar of Uttarakhand, the ninth district of this pocket, the share of Muslims in the urban areas is lower than in the total population. They have a share of 27.37 percent in the urban population of the district compared to 34.28 percent in the total population. But Muslims form a majority in 7 of the 24 towns of this district; and, in six of these, their share is above70 percent.

Another pocket of high Muslim growth in Uttarakhand

Rapid growth of Muslims in Hardwar and Udhamsingh Nagar of Uttarakhand

As we have mentioned above, Hardwar of Uttarakhand is an integral part of the northwest UP pocket, and as in the rest of that pocket, share of Muslims in Hardwar has been rising rapidly. There is a similarly high growth of Muslims in Udhamsingh Nagar, which was carved out of Nainital after 1991. Since districts of Uttarakhand have been extensively reorganised in the last several decades, long time-series data is available only for the whole Kumaon region including the districts of Udhamsingh Nagar, Nainital, Champawat, Almora, Pithoragarh and Bageshwar. As seen in the Table here, Muslim presence in this region has been rising by about 2 percentage points every decade since 1981 and has now reached above 12.2 percent; in 1961, there were only 5.2 percent Muslims in Kumaon. The presence of Muslims is thus growing rapidly in both parts of Uttarakhand; Hardwar of Garhwal and Udhamsingh Nagar of Kumaon are the focal districts of this growth.

The rise in the share of Muslims in these two pockets is so high that Muslim presence in the whole of Uttarakhand has risen by 4 percentage points since 1991, after the State was carved out of UP. In 1991, Muslims had a share of 10.00 percent in the population of the State; it rose to 11.92 percent in 2001 and has increased further to 13.95 percent in 2011. This makes Uttarkhand the State with the second highest accretion to the share of Muslims in the country, after only Assam.

Another pockets of high Muslim presence and growth:
Bahraich-Balrampur-Siddharthnagar-Sant Kabirnagar belt of East UP 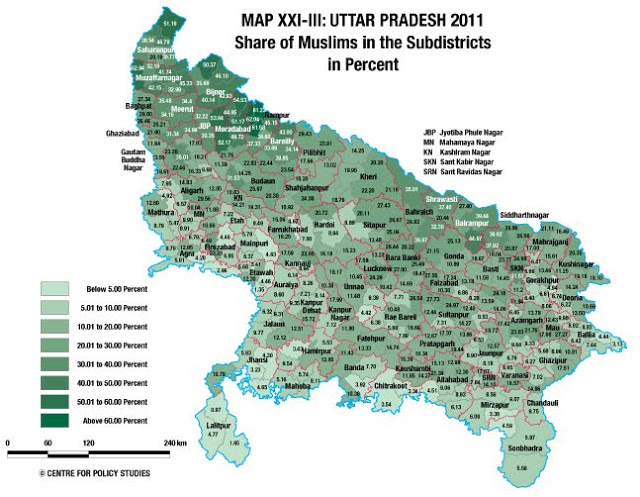 Besides the 41 sub-districts in the northwest part of UP that we have discussed above, there are another 8 sub-districts in the State with Muslim presence of more than 30 percent. As seen in Map XXI-III above of the share of Muslims in the sub-districts, these 8 sub-districts form a more or less contiguous region within Bahraich, Shrawasti, Balrampur, Siddharthnagar and Sant Kabirnagar districts lying along the border of Nepal in east UP. Muslim presence in the whole of this border belt was rising quite rapidly up to 1991. The growth in their share seems to have stalled after that. During 2001-11, the share of Muslims in the five districts that we have mentioned here has increased only marginally, from 30.9 percent in 2001 to 31.5 percent in 2011. We have discussed this moderation of Muslim growth in the neighbouring Bihar and Jharkhand in earlier notes, RDI Blog III, RDI Blog IV and RDI Blog V. Their growth, however, continues to be robust in the West UP pocket that we have discussed here and in Uttarakhand.