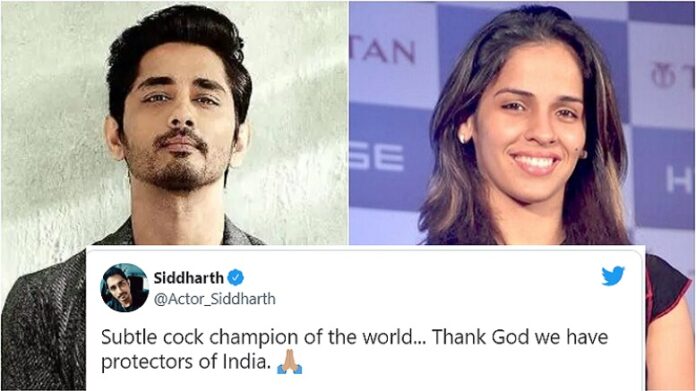 Actor Siddharth is known for having a foul tongue and expressing his left-liberal views in the most arrogant of manners. But he stooped lower even by his own standards when he made a shocking, lewd jibe on Twitter at badminton ace Saina Nehewal.

Saina was expressing her views on the security lapse during PM Modi’s recent Punjab visit, something that multiple senior law enforcement officers and even Congressmen like Manish Tewari and Sunil Jakhar have expressed concern over. Blocking the PM’s convoy was the latest act of lawlessness which radical farmers organisations like BKU and its splinter groups have inflicted on the nation in the name of ‘protests’. Why these ‘protests’ are continuing despite revocation of the farm laws is another question.

But the visceral Modi-hater Siddharth could not stomach Saina expressing her views, and labelled her “subtle cock champion”. This is the ugly reality of the misogyny, sexual objectification and sexual innuendo which any woman who speaks in support of the PM or as a Hindu, has to face in the liberal-dominated public sphere today.

NCW (National Commission for Women) has taken cognizance of Siddharth’s lewd jibe and written to Director General of Police, Maharashtra to investigate the matter and register an FIR under the relevant provisions of law.

As most English-language media journalists share the same visceral hatred for the PM and Hindus, it was not surprising to see Aroon Purie’s propaganda outlet India Today jump to Siddharth’s defense with a headline that read “Siddharth trolled for ‘sexual innuendo’ in response to Saina Nehwal’s tweet”.

The India Today article also subtly hinted its support for those who claim there was no real security lapse, by suggesting that the incident only “resulted in a huge row on social media”. The fact is that a central team has interrogated 13 top Punjab cops including DGP-ADGP, Punjab govt (despite brazen dismissals by CM Channi) has indirectly admitted to the lapse by sacking the Punjab DGP and now transferring the Ferozepur SSP, and the matter is also being heard by the Supreme Court (not a healthy sign as this is a purely executive issue, but this is the sad reality of our politicized and fractious polity).

If any ‘RW’ male celebrity had made a similar comment about a woman supporting Rahul Gandhi, the likes of India Today would have been all over him like a rash and condemned his actions instantly.

Netizens wondered if the IT minister would jump in to take prompt action like he did when Shiv Sena MP Priyanka Chaturvedi complained over the #BulliBai app.

Anyone even remotely linked with that app was arrested through lightening police action by Delhi Police and Mumbai Police from places as far flung as Uttarakhand, Assam, Karnataka, Madhya Pradesh. However, the same police forces drag their feet when the matter is not deemed urgent enough by our elites and left-liberal media.

For eg., two sadhus and their driver were brutally lynched in Palghar in 2020 as Maharashtra Police stood watching – most of the accused are out on bail and no meaningful action has been taken against the policemen who literally threw the elderly sadhu into the hands of the blood-thirsty mob. A Hindu SC mother whose minor daughter (14) had been abducted by a Muslim man (32) was told by Delhi Police to pay ‘petrol money’ if she wanted them to go find her girl.

Just to prove that his earlier tweet was no one-off, Siddharth dipped into his deep reserves of Hindu-hatred to demean news anchor Navika Kumar as a “stoolkit who will raise a stink”.

Mocking the security lapse, which occurred at best due to ineptitude of the Punjab govt & at worst due to their connivance, as a storm in a teacup seems to be the favored strategy of Modi-haters. Seeing as to how several columnists for outlets like Quint and DailyO have in the past wished for the PM’s assassination, and Lutyens’ cabal members like Karan Thapar and Mani Shankar Aiyer have cryptically asked for his ‘sudden removal’, such attitudes are not surprising.

After all, even a real terror attack in the form of serial blasts during a 2013 Modi rally in Bihar failed to elicit any concern in our left-liberal mafia. The Islamic SIMI terrorists responsible for those blasts were recently convicted and 4 out of 9 were given the death sentence, but even that news barely made a dent in the news cycle!

But Siddharth took the mocking and flippancy to the next level by wondering if it was really the PM who was stuck on the flyover or ‘Khalistanis or paid actors’ used to stage the whole scene.

Murders of BJP leaders, workers and supporters have become so normalized in the country, that Manpreet Singh, a 20-year-old YouTuber from Punjab, made a GTA gaming video in which he showed himself brutally killing PM Modi. Now, he is ‘apologizing’ and playing victim by claiming his family is getting death threats. As far as we know, no police action has been taken against him yet.

No other country takes such a lackadaisical approach to internal security and threats to its leadership.

In 2009, IIT alumnus Vikram Buddhi was sentenced to 57 months in prison and three years of supervised release for posting hate messages in 2006 to the then American President George W Bush. In 2020, a man who sent death threats to the UK PM Boris Johnson and his partner was handed a five-year prison sentence.