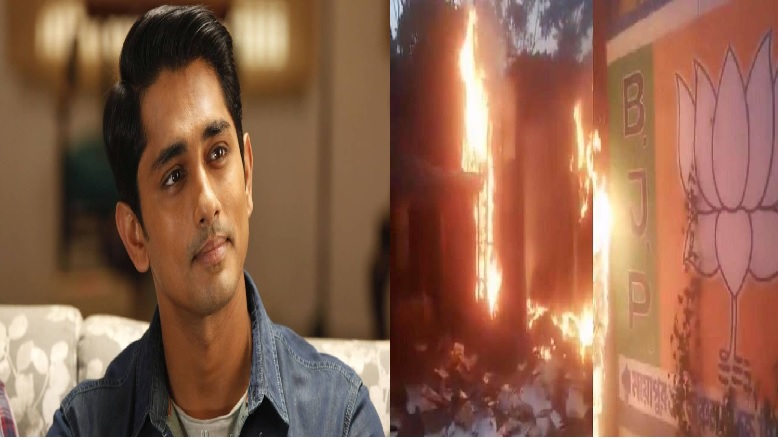 No, we don’t have much hope from Bollywood actors and nor do we expect them to speak a word against the post-poll atrocities meted out on the Hindus in West Bengal. It will not be false to say, perhaps there are a few who are silently relishing this violence and bloodshed for it satiates their sadist anti-Hindu outlook.

Having said that, we were not expecting these entertainers to first come out and openly celebrate Mamata Banerjee’s victory and then look the other way when the anti-Hindu post-poll pogrom started. After Bollywood actor Siddharth’s tweets, we stand corrected. People of his ilk are so filled with Hindu hatred or blinded by political ideology, that they can’t find even a word of empathy for poor Hindus being murdered, sexually assaulted and losing their homes and shops.

The first tweet by Siddharth was on Sunday, 2 May at 1:21 PM when the election trends had become clear that TMC was headed for victory. He tweeted that the BJP wanted to introduce ‘poribartan’ (change), but Mamata was whacking them with a ‘bartan’ (utensil) – this wordplay intended to celebrate the victory of his favored party, unmindful of the violence-marred elections where half a dozen died during the polling, with numerous incidents of crude bombings and candidates and workers being assaulted.

Mamata Banerjee, in several public rallies, had incited her supporters to take to makeshift weapons and encouraged her women supporters to hit the streets with ladles and other kitchenware and charge at the central forces overseeing elections. Was the actor referring to that?

Is he aware that the last few years have seen around150 BJP workers being murdered as the party emerged as the leading opposition to ruling TMC? Or is such violence par for the course for the likes of Siddharth, as the victims are BJP supporters? Incidentally, chilling threats of attacks against ‘Sanghis’ had already started appearing on social media around the time Siddharth made this flippant tweet.

Later, when some twitter users condemned his apparent mocking of West Bengal’s election-related violence, his response is even more instructive in how such people rationalize such brutality and dehumanize Hindus who differ from them in political choice. From 2 May to 5 May – Siddharth didn’t tweet a word, although it had become clear by then that a large-scale pogrom against BJP’s largely Hindu supporters had been unleashed by TMC goons. Death of at least 9 BJP workers had been confirmed by then and it was clear that thousands of lives, including that of some Hindu supporters of TMC caught up in the waves of attacks against BJP-voting areas, had been affected by the indiscriminate looting, arson and mayhem.

But when Shefali Vaidya called him a ‘vacuous dimwit’ and ‘psycho creep’, he chose to dehumanize her by calling her a ‘cockroach demon’. He still did not condemn the violence, rather attempted to rationalize it by questioning if the violence could be called anti-Hindu if Hindu workers of TMC were not being attacked – basically implying that Hindu supporters of ‘uneducated, cult party’ BJP were ‘asking for it.’ He latched upon West Bengal Police’s assertion that the news of gang-rape of two BJP polling agents in Birbhum were ‘fake’ to claim that no rapes happened at all.

Can you imagine how the same people would have reacted if police in a BJP-ruled state had dismissed claims of sexual violence like this, that too in a fluid scenario where multiple reports of mass attacks across large parts of the state are streaming in? Where no media is covering frenetically and meeting victim families like they did in the Hathras case? In fact, one brutal gang-rape of a BJP worker in Purba Medinipur has indeed been confirmed, and it is highly probable that more such crimes will be confirmed in coming days once victims feel secure enough to lodge complaints.

On 5th May, National Commission for Women (NCW) sent a team on a two-day visit to probe post-poll violence against women in West Bengal. This is what it had to say –

“Police officials failed to take steps to provide security to women in the State. Many victims are unable to speak about the violence they have witnessed due to fear of backlash,”

The complainants told the team that they have been receiving rape and threat calls every day. The women also said that they are not being provided any protection by the police or state authorities.. …many women said they were worried about the safety of their daughters and wanted them to leave the state for their safety.

The NCW alleged that it was supposed to meet many more victims of the post-poll violence but the state government officials refused to facilitate the meetings citing restrictions on movement in view of the COVID-19 pandemic.

Finally, Siddharth made it very clear as to who he thinks is responsible for the post-poll violence in Bengal. “No place burns unless one party loses….we are a country hijacked by a communal badly behaved cult” he tweeted, clearly implying that BJP was behind the violence as it was upset over its electoral loss.

How different are such conspiracy theories to those peddled in Pakistan that India/Israel are behind everything wrong with that country? This theory doesn’t even pass a simple test – did Maharashtra, Rajasthan, Punjab, Tamil Nadu, Karnataka, Madhya Pradesh, Delhi, Bihar witness any violence when BJP lost assembly elections in those states at some point in the last 7 years?

Siddharth also found time to make an absurd statement that BJP MP Tesjasvi Surya is ‘far more dangerous’ to 26/11 terrorist Ajmal Kasab. This probably came about because of the way the ‘liberal’ gang has been targeting Tejasvi over his expose of the BBMP bed-allotment scam. While one hopes that the young politician will take legal actions against this despicable tweet, it shows the severe delusions and mental bankruptcy of such ‘youth icons’ like Siddharth who probably frame their worldview listening to Lutyens’ media. Is it any wonder that jihadi mastermind Hafeez Saeed finds that the likes of Barkha Dutt are doing ‘good work’

Siddharth has a staggering 4.5 million followers on Twitter. With ‘influencers’ like these, is it any wonder that anti-Hindu bigotry is so rampant in this country today and that we are still struggling to develop while other nations keep zipping by?