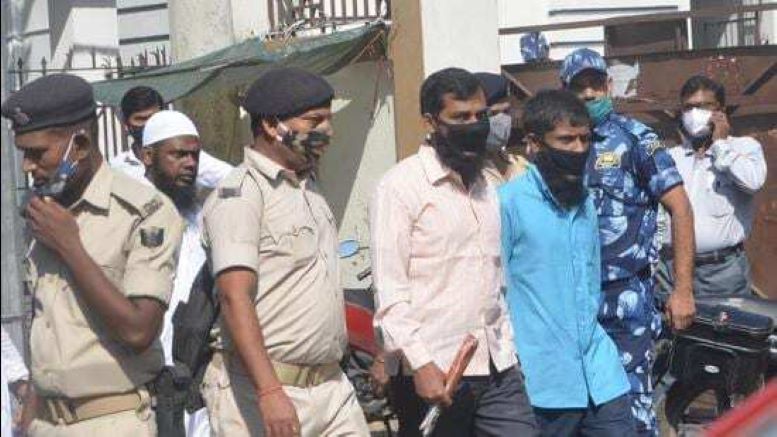 4 of the 9 SIMI terrorists convicted in the 2013 serial bombing of then Gujarat CM Narendra Modi’s Patna rally have been awarded the death penalty.

The special NIA (National Investigation Agency) pronounced death sentence for 4 SIMI terrorists who had been convicted in the 2013 Patna serial blasts in October this year. Among the other convicts, two were given life imprisonment while three were sentenced to 10 and 7 years imprisonment.

Imtiyaz Ansari, Haider Ali, Numan Ansari, and Mojibullah Ansari have been given the capital sentence, Umer Siddiqui and Azharuddin are the accused who have been awarded life imprisonment, 10 year jail term has been handed to accused Ahmad Hussain and Firoj Aslam while Ifteqaar Alam has been sentenced to 7 years imprisonment.

Multiple blasts rocked Patna on October 27, 2013 including Gandhi Maidan where BJP’s Hunkar rally was underway and Patna Railway Junction. Cases were registered on November 1, 2013. Six people were killed and more than 89 were injured in the six explosions that took place at Gandhi Maidan.

On October 27, the NIA Special court had convicted 9 SIMI terrorists in connection with the Patna serial blasts but had not pronounced the quantum of punishment.

Special public prosecutor Lalan Kumar Sinha, who represented NIA in the court, said nine of the total 10 accused were convicted under various sections of the Indian Penal Code, including under 302 (murder), besides sections of Unlawful Activities Prevention Act, Explosives Act and the Railways Act. Sinha said all convicts were members of the banned outfit, Students’ Islamic Movement of India (SIMI).

Additional district and sessions judge of the special NIA court, Gurwinder Singh Malhotra, which has held nine people guilty, let off the 10th accused, Fakruddin, for want of evidence…

…Sinha said five of the convicts have already been held guilty in the 2013 Bodh Gaya blasts case. He said he has demanded death sentences for all accused.

In its charge sheet, NIA said that the accused had planned the Patna blasts after they failed to get close to Modi at his previous rallies in New Delhi, Chhattisgarh and Uttar Pradesh.