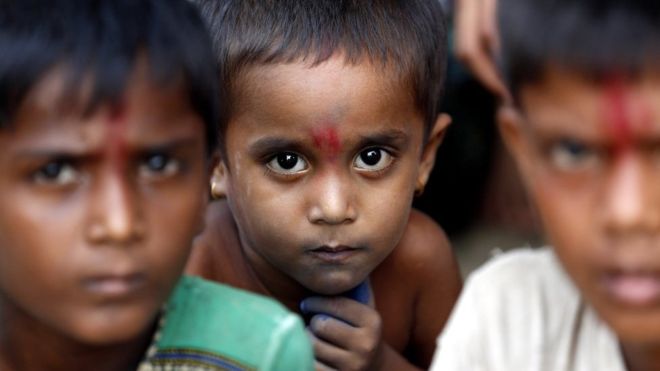 Rohingya Muslim terrorists in Myanmar killed dozens of Hindu civilians during attacks last August, according to an investigation by Amnesty International.

The group called ARSA killed up to 99 Hindu civilians in one, or possibly two massacres, said the rights group. ARSA had denied involvement.

The killings came in the first days of an uprising against Burmese forces, who are also accused of atrocities. Since August nearly 700,000 Rohingyas and others have fled the violence.

Amnesty says interviews it conducted with refugees in Bangladesh and in Rakhine state confirmed that mass killings carried out by the Arakan Rohingya Salvation Army (ARSA) took place in a cluster of villages in northern Maungdaw Township at the time of its attacks on police posts in late August.

The findings also show ARSA was responsible for violence against civilians, on a smaller scale, in other areas. The report details how ARSA members on 26 August attacked the Hindu village of Ah Nauk Kha Maung Seik.

“In this brutal and senseless act, members of ARSA captured scores of Hindu women, men and children and terrorised them before slaughtering them outside their own villages,” the report said.

Hindu survivors told Amnesty they either saw relatives being killed or heard their screams.

One woman from the village of Ah Nauk Kha Maung Seik said: “They slaughtered the men. We were told not to look at them … They had knives. They also had some spades and iron rods. … We hid ourselves in the shrubs there and were able to see a little … My uncle, my father, my brother – they were all slaughtered.” 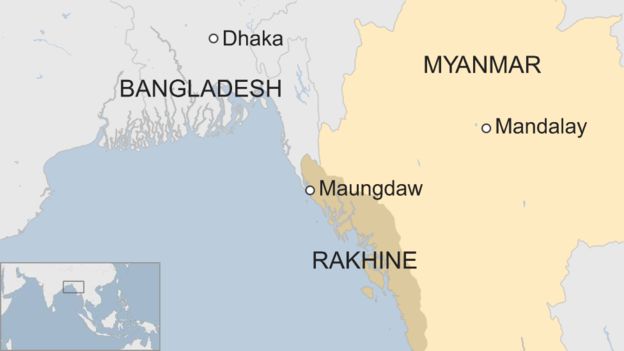 ARSA terrorists are accused of killing 20 men, 10 women, and 23 children, 14 of whom were under the age of eight. Amnesty said the bodies of 45 people from the village were unearthed in four mass graves in late September. The remains of the other victims, as well as 46 from the neighbouring village of Ye Bauk Kyar, have not been found.

The investigation suggests that a massacre of Hindu men, women, and children in Ye Bauk Kyar happened on the same day, bringing the estimated total number of dead to 99.

Last September, as international alarm was growing over the scale of the Rohingya exodus to Bangladesh, and over the horrific accounts of atrocities by the Myanmar security forces, the government in Nay Pyi Taw announced that it had discovered a mass grave.

But the victims were not Muslims – they were Hindus, killed, said the government, by terrorists from ARSA. Journalists were taken to the site to see the grave and the bodies. However the government’s continued refusal to allow independent human rights researchers into Rakhine left lingering doubts about exactly what happened in the village of Ah Nauk Kha Maung Seik, and a neighbouring village, Ye Bauk Kyar.

The fact that the Myanmar government refused to acknowledge any serious abuses by its forces, in the face of huge amounts of testimony, undermined its credibility further.

At the time ARSA denied any involvement in this massacre – the group has made no public statements for four months. Myanmar has complained of one-sided reporting of the conflict in Rakhine, but many foreign media, including the BBC, did report the killing of Hindus back in September.

Amnesty also criticised what it said was “an unlawful and grossly disproportionate campaign of violence by Myanmar’s security forces”.

“ARSA’s appalling attacks were followed by the Myanmar military’s ethnic cleansing campaign against the Rohingya population as a whole.”

The human rights group says its findings are based “on dozens of interviews conducted there [in Rakhine] and across the border in Bangladesh, as well as photographic evidence analyzed by forensic pathologists”.

It’s hard to ignore the sheer brutality of ARSA’s actions, which have left an indelible impression on the survivors we’ve spoken to. Accountability for these atrocities is every bit as crucial as it is for the crimes against humanity carried out by Myanmar’s security forces in northern Rakhine State.”

ARSA has denied such accusations in the past, saying that claims of its militants killing villagers were “lies”.

The Rohingya – a stateless mostly Muslim minority – are widely despised in Myanmar, where they are considered to be illegal migrants from Bangladesh, despite the fact that some have been in Myanmar for generations. Bangladesh also denies them citizenship.

(Source: bbc.com – we have replaced the word ‘militants’ with ‘terrorists’ to describe ARSA)

HinduPost was one of the few news outlets in Bharat which covered the genocide of Hindus and other ethnic minorities of Myanmar last year in Rakhine (Arakan) state at the hands of ARSA and other Rohingya Muslim fanatics. Most of our coverage was dismissed as “fake news”, the usual response of the liberal-secular lot when confronted with facts that upset their pre-decided worldview.

This brutal violence and the attack on Myanmarese border Army outposts is what triggered the military crackdown leading to the Rohingya Muslim exodus, a fact conveniently hidden by the Islamists and secularists who twisted the narrative into a one-sided tale of Muslim persecution.

It is mind boggling that a organisation like Amnesty International took 10 months to conclude that mass killing of Hindus did take place, when there was copious amounts of evidence including video testimony of survivors just a few days after the killings. At the time of this disturbance, Amnesty and the entire Western establishment was focused solely on the exodus of Rohingya Muslims, and no one really bothered to listen to what the Hindus and other minorities living alongside the Rohingya Muslims in Rakhine state, and especially Maungdaw township, had to say.

It was not just ARSA terrorists, but large mobs of Rohingya Muslims that attacked their Hindu, Buddhist and other ethnic Arakanese neighbours. The survivors were so terrified that they pleaded the Myanmarese Government to resettle them separate from Muslims. Apart from the 99 Hindus, ARSA terrorists killed 14 Arakanese Buddhists, 13 Mro ethnic people, 5 ethnic Chakmas/Daingnet, 15 members of government security forces, and 3 civil servants. Some Hindu women were abducted, forcefully converted to Islam and taken across the border to Bangladesh, before they were rescued by Hindu groups in Bangladesh.

Amnesty International & BBC are claiming “new evidence” has convinced them about the massacre of Hindus at the hands of Rohingya terrorists, but this evidence was right there all the time.

When BBC says “government’s continued refusal to allow independent human rights researchers into Rakhine left lingering doubts”, what it means is that a human rights violation can be confirmed  only when a Western human rights researcher says so. The Myanmarese groups, local Hindu organisations and Myanmar-based news outlets like The Irrawaday who were giving first-hand reports of the massacre of Hindus, all pale into insignificance in front of an Amnesty or USCIRF ‘investigation’.

Such thinking is a product of the implicit belief in Western moral supremacy and that “human rights” is a “Western value”. These two tweets call out some of the frauds who were last year dismissing the reports of the Hindu massacre in Myanmar at hands of Rohingyas –

So @Javedakhtarjadu ji you have egg on your face as Amnesty has confirmed massacre of Hindus by Rohingya Muslim groups. https://t.co/kfoPiJYdoc

Around the time of the massacre, Wagle only RT'd a HuffPost article stating that Hindus were merely "caught in the crossfire between Myanmar's military and Rohingya Insurgents."
Only after a Western NGO confirms that ARSA committed the attacks does he take an anti-ARSA stance. pic.twitter.com/qt9Ms3XeRt

But howsoever late, the recognition of what the Hindus of Myanmar suffered, is welcome, and one hopes that international attention now also turns to what Hindus in Bangladesh, Pakistan and parts of Bharat like West Bengal, West UP and Kerala are suffering.

As for the question of illegal Rohingya refugees in Bharat, whom the left-liberals and elite lawyer cabal are trying their best to settle in the country, the high-risk of Islamist radicalisation in their midst means that they pose a clear national security risk  –