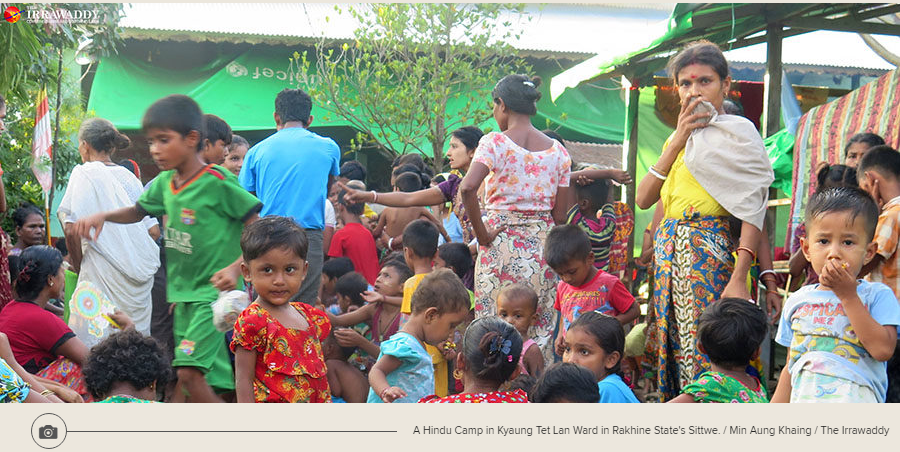 According to the minister, camps in Sittwe, Ponnagyun, Kyauktaw, Mrauk-U, and Minbya townships will be closed as the situation has returned to normal in those areas and many have already left the camps and returned home. “We are not forcibly evicting them. We are closing [the camps] because there are only a few people left in camps,” the minister told The Irrawaddy.

While some 600,000 Rohingya have fled to Bangladesh since Aug. 25 militant attacks prompted a Myanmar Army response in Maungdaw district, thousands of local ethnic people including Arakanese, Mro, and Daingnet (Chakma) as well as Hindus also fled to Sittwe and other townships, though many have now returned home.

According to the government, more than 6,000 people were taking shelter at camps in Sittwe directly after the militant attacks. Currently only five camps—two ethnic Arakanese camps, one Maramagyi camp and two Hindu camps—are operating in Sittwe as many have returned.

More than 600 people are still taking shelter at a Hindu camp in Danyawaddy sports ground and more than 300 at Maramagyi camp. Some 400 Hindus are sheltering at Kyaung Tet Lan ward.

About 1,400 Hindu people who were taking shelter at Danyawaddy sports ground and two Hindu temples in Kyaung Tet Lan and Kyaung Gyi Lan wards of Sittwe who have recently returned to their villages are having trouble with accommodation and food, said vice-chairman U Maung Hla of the Rakhine State Hindu Religion Foundation (Sittwe Branch).

“Those who have gone back phoned me and said that camps in their home areas will not accept them. They said they have no place to live and are also having trouble finding sufficient food,” he said. They have to stay at their relatives’ houses and monasteries, he said, adding that Hindu spiritual leaders in Sittwe have provided some rice for them.

“We still want to stay [in the camp] though we’re concerned that the government might not like it if we stay. We are concerned about our safety if we go back. Unless the government has a resettlement plan, we’d like to stay here,” said U Ni Mal, a Hindu community leader taking shelter at Danyawaddy sportsground.

U Ni Mal hopes that the government would resettle Hindus together at a place close to the main road and the Buddhist community.

Minister U Aung Kyaw Zan said that Hindu and Maramagyi people may continue to stay at the camp if they wish. “We won’t force them to leave. We will let them stay here if they want,” said the minister.

The state government informed camp organizers about planned closure of the camps on Oct. 27, saying that camps are to be closed by Nov. 2 and the government would stop food and cash supplies for the camps on that day.

Hindus of Myanmar have been one of the worst sufferers of the violence that broke out in Myanmar in end August. This latest round of violence was a result of the brutal attacks of Islamist terror organization ARSA (Arakan Rohingya Salvation Army) —a group which claims to fight for the rights of the Rohingya people. On 25 August, ARSA attacked 30 security outposts killing a dozen officers and seizing weapons. Within hours, large Muslim mobs unleashed a campaign to drive Hindus out of Muslim-dominated villages – around 100 Hindus were killed in just a few days.

Analysts have observed that ARSA’s attacks were a calculated move to provoke the military backlash that triggered a mass exodus of Rohingya and attracted serious international attention to the issue. ARSA created the crisis now facing Myanmar, Rohingya refugees, and the international community.

Daw Khin Saw Wai, a Rakhine member of Parliament from Rathedaung Township, recently told The New York Times that  “It will be impossible to live together in the future” as she believes, like other Rakhine people, “all the Bengalis learn in their religious schools is to brutally kill and attack.”

ARSA leader Ata Ullah Ataullah Abu Amar Jununi, known as Ata Ullah, who was born among the Rohingya diaspora in Pakistan and moved as a child to Saudi Arabia, delivered a voice message to his supporters ordering the launch of an offensive against government border outposts in August. The message stated, “if 200 or 300 people come out, 50 will die. God willing, the remaining 150 can kill them with knives.”

Originally known as, Harakah al-Yaqin or ‘Faith Movement’, ARSA’s mentor, Abdus Qadoos Burmi, a Pakistani of Rohingya descent, is close to Pakistan’s Lashkar-e-Taiba (LeT), or the ‘Army of the Righteous’. LeT which is a proxy of the Pakistani Army and intelligence organization ISI, was set up in 1987 in Afghanistan with funding from now deceased al Qaeda founder Osama bin Laden. It is now one of South Asia’s largest terrorist outfits.