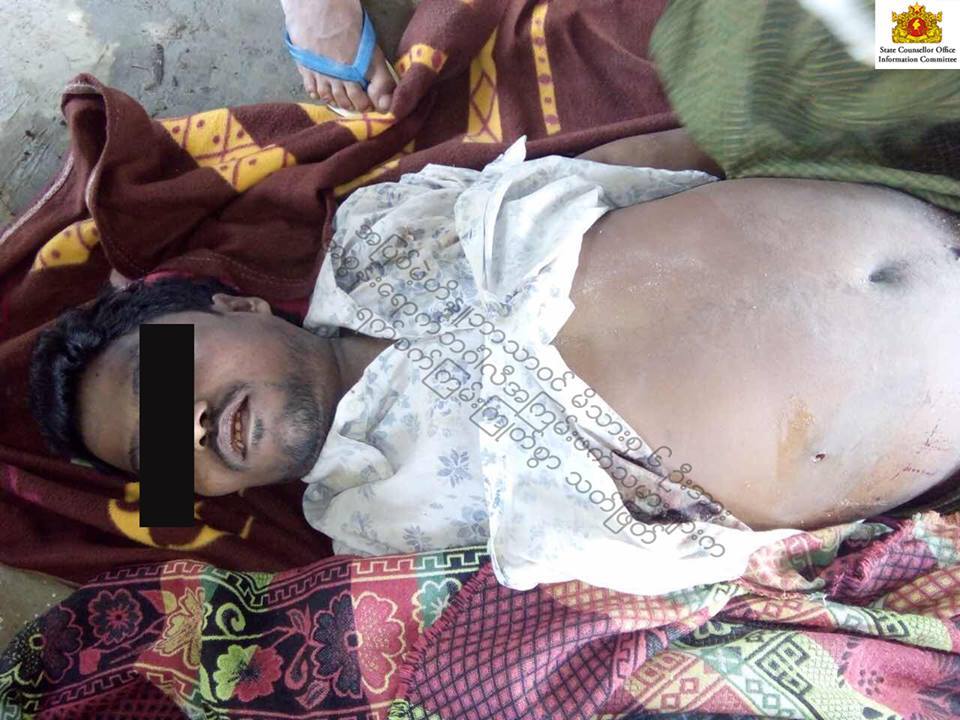 Six members of a Hindu family—three of them children—were brutally murdered by Rohingya Muslim terrorists in Maungdaw township of northern Rakhine state in Myanmar on Saturday, Myanmarese news organization The Irrawady has reported quoting Government sources.

As per the report –

The 12-member family, who live in No. 4 Quarter of downtown Maungdaw, were returning home from working as casual laborers in Myin Hlut village in southern Maungdaw at 11 p.m. on Saturday when they were caught in clashes between Rohingya militants and the Myanmar Army, according to a statement released on the Facebook page of the State Counselor Office Information Committee on Sunday.

The family sought refuge in a construction site between Myo Thu Gyi village and downtown Maungdaw on the Maungdaw-Buthidaung road when they were discovered by Muslim militants who allegedly shot dead two men, one woman, and three children, the statement read.

Two women were severely injured and four children managed to escape to a neighboring village where security personnel were deployed.

On Sunday, the six bodies were taken to Maungdaw General Hospital and the surviving family members traveled to Buthidaung. The Irrawaddy was unable to independently verify the account.

In a separate attack, 20 ethnic Daignet (Chakmas) —a sub-ethnicity of Rakhine—were besieged by around 100 Muslim militants with knives as they evacuated to Aung Zan village in Maungdaw on Saturday afternoon, according to a statement from the Office of the Commander-in-Chief’s Facebook page on Sunday.

One man evaded the violence but the fate of the rest of the villagers is unknown, according to the statement.

Since Rohingya militants launched attacks on 30 police targets and one army base on Friday, leaving 12 members of security forces dead, the route between Buthidaung and Maungdaw has been blocked as a precaution against landmines.

According to Reuters, the Myanmar government has evacuated at least 4,000 non-Muslim villagers in the area as clashes continue, while around 2,000 Rohingya Muslims have fled across the border to Bangladesh. Reuters reporters at the border could hear gunfire from the Myanmar side on Sunday, which triggered a rush of Rohingya toward the no man’s land between the countries.

Saturday’s attack on the Hindu family was strongly condemned by a legal advisor for the All Myanmar Gurkha Hindu Dhama Assocation U Gannes Basnet, who spoke to The Irrawaddy by phone from Kachin State.

He urged the government to protect civilian lives in Maungdaw.

“This is not just attacks on Buddhists and Hindus, it’s threatening the security of the nation,” said U Gannes Basnet.

There are about 2,000 Hindus living in Maungdaw, according to a member of Myanmar’s Hindu Association U Bagale who lives in Mogok Township of Shan State.

U Bagale said he had heard from relatives in the area that Maungdaw’s Hindu Temple had been burnt down, although The Irrawaddy was unable to verify this.

“They were innocent children who have no idea about politics, why did they brutally murder them?” he asked of Saturday’s incident.

Chairman of the Arakan National Party’s Maungdaw chapter  U Khin Maung Than told The Irrawaddy that the entire Hindu community from No.5 Quarter of Maungdaw Township had been driven out by Muslim residents, and one was killed.

Some 400 Hindu families were sheltering in schools, monasteries, and government compounds, he said.

He described the situation in Maungdaw as “critical,” and said 4,000 people had sought refuge at the three-mile border check point, near the Mayu mountains on the road between Maungdaw and Buthitaung, and five Rakhine villages had been burnt down in northern Maungdaw.

The Irrawaddy was unable to independently verify his accounts.

In Friday’s statement, the group vowed that they would “continue [their] struggle.” Hindus are around 2% of Buddhist-majority Myanmar’s total population, although there numbers are estimated varyingly from 0.5 -2 million. There are also reports of atleast 3 Chakma Buddhist residents of Rakhine state too being killed in recent violence.

Many Myanmarese on social media are protesting the biased international coverage of the violence in Myanmar which erupted after attacks by Rohingya Muslim terror group ARSA. While internationally, only the displacement of Rohingya Muslims is being reported, the fact is that many defenseless non-Muslim civilians (chiefly Hindus and Buddhists) living in the affected part of Rakhine state are being targeted by ARSA-linked terrorists.

#BBC took a pic of Hindi families fleeing their home and made a headline about it as if #Bengali #Rohingyas struggle. God help me. @BBC pic.twitter.com/e2g9kWnaj9

Hindu village in #Maungdaw torched and burnt down by #Rohingya Bengali Immigrants. pic.twitter.com/2YoX0zRSmo

But there are influential elements in Lutyens’ media funded by some of Bharat’s biggest corporates and philanthropists who are consistently painting the crisis in Myanmar as one of Rohingya Muslims being persecuted by Myanmar, and advocating that Bharat take in ever-increasing waves of Rohingya Muslim refugees, who incidentally were silently settled in disturbed states like Jammu & Kashmir under the previous UPA Government.

Whose national interest do these elements represent and why are they battling so hard for a foreign Muslim population which is showing clear signs of extreme radicalization to be settled in Bharat?