Testimonies of survivors and reports from different Myanmarese news organizations are showing a clear picture of horrific ethnic cleansing of Hindus, Buddhists and other Arakenese ethnic groups at the hands of Rohingya Muslim terrorists in Rakhine state of Myanmar. Around 100 Hindus have been massacred thus far by the jihadi terrorists and many 1000s displaced who are now living in cramped conditions in refugee camps. Some Hindu women were reportedly abducted, forcefully converted to Islam and taken across the border to Bangladesh, before they were rescued.

“Almost 100 Hindu people were massacred by Muslim terrorists in Maungdaw township of Arakan, alleged the Hindu families taking shelter at a temple in Sittwe, the capital city of the western Burmese province.

Ms Saraswati, a young Hindu woman, while interacting with Narinjara News recently, claimed that the Muslim residents along with the terrorists killed many of her in-laws families including her father & mother in laws at Kha Mong Sit village of northern Maungdaw locality. 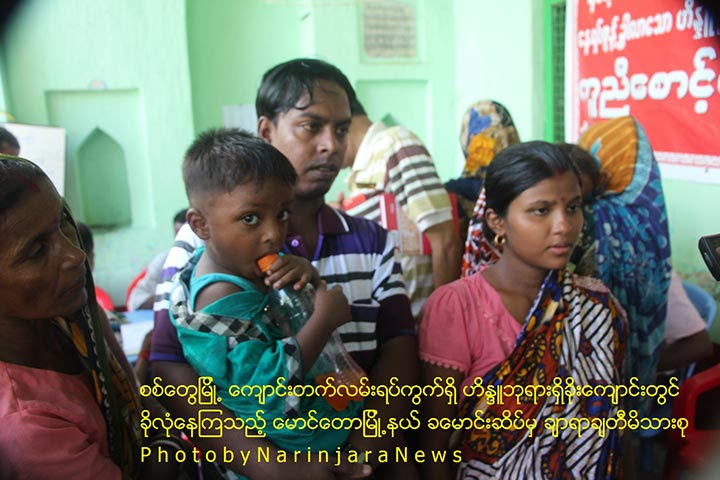 The Hindu family of Ms. Saraswati

She and her family were however lucky as they visited her original village during those troubled days.

“At least 100 Hindu people from Yebaw Kyat and Taung Wra  villages were murdered by terrorists arriving from nearer Muslim villages. The incident took place on midnight hours of August 26. Me and my family were away at Kha Mong Sit village and we surviveed,” added Saraswati.

Her younger sister with five other Hindu women was hijacked by Muslim terrorists. However, they were rescued by a Hindu priest with the help of Bangladesh police from the border areas.

Her husband also confirmed that his own father, mother and other relatives were massacred by Muslim terrorists.

Another Hindu couple of  Maung Ba and Swapana claimed that Swapana’s father and mother were also murdered by the terrorists in the same village. Maung Ba revealed that the  Muslim terrorists were angry with Hindu community people as they protected a Buddhist monastery inside their village.

“It is the main reason because of which the terrorists targeted the Hindu families. Our elders protected the monastery with candle lights and flowers offered every day,” added Maung Ba. 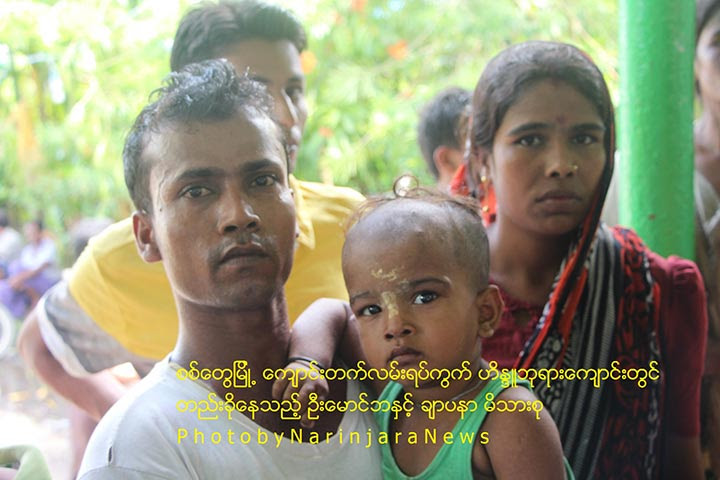 The Hindu family of Maung Ba and Swapna

Another Hindu teacher from a government high school of Buthidaung, U Maung Maung also confirmed that 98 Hindu people were murdered by Muslim terrorists.

“The terrorists suspected that the Hindu families of Kha Mong Sit village  leaked  information to the  authority. Initially they threatened the  Hindu people, but later they adopted brutal actions,” added U Maung Maung.

The Burmese government is yet to admit the developments, because of that, Narinjara News cannot confirm the information about all these murders.

The Irrawady reports in an article titled ‘Dozens of Hindus Killed in Maungdaw: Relatives’ –

“Eight-year-old Muni is one of the sole survivors in her Hindu family, after eight of her relatives were reportedly killed by Muslim militants one week ago in Kha Mauk Seik village, some 40 miles from downtown Maungdaw, in northern Rakhine State.

The girl had left her family to work in the home of a friend, Mina Kumari, also in Maungdaw Township, six months earlier. Through an interpreter, Muni told The Irrawaddy on Sunday a statement that was echoed by other relatives and a Hindu community leader in Bangladesh—that she had heard her parents, grandmother, newborn brother, sisters and brothers-in-law had been killed.

One of her elder sisters is among eight women who said they were initially abducted by militants from the Arakan Rohingya Salvation Army (ARSA), but now sheltering at a relief camp in Bangladesh’s Kutupalong District. Following ARSA attacks on 30 police outposts on Aug. 25, the Myanmar government declared the group a terrorist organization.

11,700 Buddhist Arakanese, Arakanese subgroups, and Hindus have been internally displaced, with many taking shelter in monasteries in the state capital of Sittwe, and Ponnagyun and Kyauktaw townships.

Bangladesh’s The Daily Star reported on Sept. 1, that around 400 Hindus had left Rakhine State for Bangladesh and were staying at makeshift camp in Kutupalong, alongside displaced Muslims.

The Daily Star said that the displaced villagers estimated that more than 80 members of their communities in Rakhine State had been killed by unidentified armed men.

As journalists are barred from the conflict zone, The Irrawaddy spoke to religious leaders and relatives of the deceased in Sittwe. Villagers who arrived in Sittwe on Sunday told The Irrawaddy that they believed around 70 residents of three communities—Kha Mauk Seik Taung Ywar, Kha Mauk Seik Yebaw Kyar, and Ohtein (also known as as Fakirabazar, Riktapara, and Chikonchhari respectively)—had been killed.

“The news about Kha Mauk Seik was heard on Saturday, and they are so desperate. They have no family members left to take care for them,” said U Maung Hla, the vice chairman of the Rakhine State Hindu Council, referring to 8-year-old Muni and another girl—16-year-old, Kajal, who told The Irrawaddy that since she left Maungdaw four months ago, she had lost nine relatives.

Mina Kumari, with whom Muni is living, told The Irrawaddy that she had lost her son in the violence, but had made contact with her daughter-in-law and Muni’s sister now in Bangladesh.

“My daughter-in-law could not speak properly on the phone, she was crying a lot and was very afraid,” said Mina Kumari. Mina Kumari said that her daughter-in-law explained over the phone that she had been forced to undergo a conversion to Islam with seven other women, and that she and her three children avoided being murdered after she gave one of the gunmen her gold earrings.

The Irrawaddy was unable to interview the victims directly on the phone, as they said they were too afraid to speak to the media, in either Burmese, Arakanese or Hindi languages.

Speaking to The Irrawaddy through an interpreter and on the condition of anonymity, a leader from the Hindu temple in Dakshin Nihla in Bangladesh said that the eight women in question—including Mina Kumari’s daughter-in-law—were brought to the temple by Bangladeshi border police.

He estimated 470 Hindus had fled to Bangladesh. He alleged that the women were filmed by members of the ARSA and told to say they feared attacks from ethnic Arakanese and the Myanmar security forces.

A sister-in-law of one of the survivors of the Hindu villages watched the video and told The Irrawaddy: “I know these women, two are from Buthidaung two are from Maungdaw.”

A journalist who has visited the conflict zone and interviewed Hindu community members has also corroborated the figure of more than 80 Hindus being killed. Here are relevant portions from The Irrawaday’s interview with this journalist –

” I went to [relief] camps and interviewed Hindus. After the conflict broke out on Aug. 25, Muslim crowds threatened them [they said]. Hindus live together with Muslims in No. 4 and No. 5 wards [of Maungdaw]. All those wards have been torched. Witnesses said arson attacks were carried out by religious extremists…

Muslims made threats. Some shot with a gun and one [Hindu] was killed. I also interviewed the mother of a victim. She could identify from where the gun was fired. But things are different from what we usually see in movies—not every one of them is shooting with a gun. Some have improvised firearms, some have guns and some have swords. They are a large crowd and it is easier for them to threaten and attack small groups of people. Hindus are the minority there and they dare not talk back to them. What they can do is to avoid conflict. So, they flee. But the town is too small, only four or five wards. So, they flee to Arakanese wards. They escaped, but unluckily some were killed on the way.

(recounting the experience of a survivor, Kamala, from the 6-member Hindu family which was butchered)..The [Hindu] family was too frightened and so they fled into a nearby building. Some of the people in the crowd had guns and they shot [at them]. Kamala was hit. She was shot in the chest and lost consciousness. The rest were killed with swords. Witnesses told us that [attackers] said words related to religion like ‘Allah is taking you. So you must go.’ [Attackers] left her because they thought she was dead. We can say her account is very credible.

Mro people also dare not live [alongside Muslims]. They know nothing about politics. They don’t know who the Rohingya are. To put it bluntly, they don’t even know who the president of Myanmar is. Such people who lead a simple life on farms and who know nothing about urban life were killed, and fell victim to the conflict. They are frightened to death.

Viewing ARSA’s recent official video clips on YouTube, its ultimate political goal is to build an Islamic State [for the Rohingya]. To put it bluntly, it is no longer about human rights. It is about self-interest, which is contrary to human rights.”

Getting accurate data in a conflict zone is very difficult, but according to the latest information, since the August 25 attacks by the Arakan Rohingya Salvation Army (ARSA) on police outposts, ARSA terrorists have killed 14 Arakanese Buddhists, 13 Mro ethnic people, 5 ethnic Chakmas/Daingnet, 15 members of government security forces, and 3 civil servants. apart from the around 100 Hindus reported to have been killed thus far.  Around 400 ARSA terrorists have been killed or apprehended by security forces.

ARSA leader Ata Ullah delivered a voice message to his supporters ordering the launch of an offensive against government border outposts last month. The message stated, “if 200 or 300 people come out, 50 will die. God willing, the remaining 150 can kill them with knives.”

Here is a heart-rending video put out on Facebook by ‘CHT-jummaland,’ a page which supports indigenous minority JUMMA people in Chittagong hill tracts, Bangladesh. It shows a Hindu woman who saw her family members, including her husband, sister-in-law and nephew, murdered in front of her own eyes by the terrorists, before she was forcefully converted to Islam.

Here is a clipping of a report by The Global New Light of Myanmar daily, which shows interviews with terrified Hindu refugees – 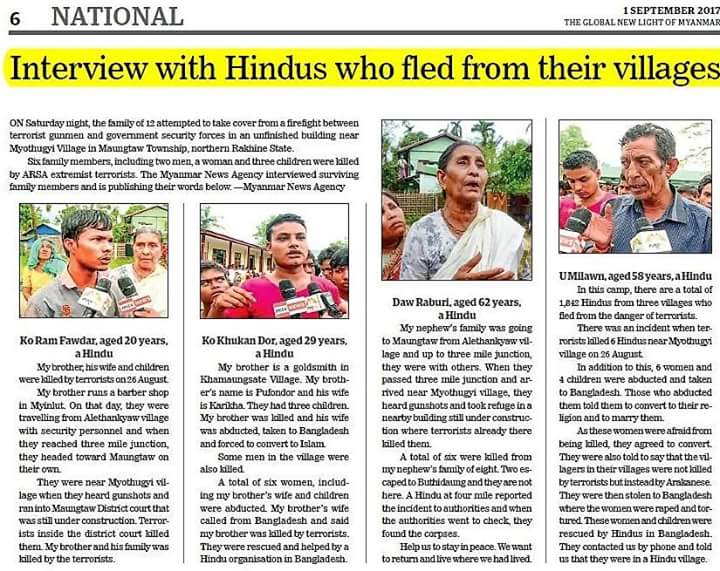 It is a damning indictment of Bharat’s mainstream media that not a single detailed account of the suffering of Myanmarese Hindus at the hands of Rohingya Muslim terrorists has appeared in our newspapers or TV news channels. All the coverage is parroting the Western media narrative of Rohingyas being persecuted at hands of Myanmar’s Government. While Muslim organizations from Kerala to Uttarakhand, and Mumbai to West Bengal are mobilizing and hitting the streets in support of Rohingya Muslims and demanding they be provided refuge and settled in Bharat, not one Hindu organization has as yet spoken out or taken out any procession for the persecuted Hindus of Myanmar! If Bharat, the spiritual homeland of Hindus worldwide, won’t speak out for Hindu human rights, who will?