Amidst all the debates of allowing Rohingya Muslims of Myanmar to stay in Bharat, the media chooses not to discuss their crimes. The Hindus of Myanmar were massacred mercilessly by these Rohingya ‘Bengali’ Muslims. Rakhine state of Myanmar was the most affected by such cold-blooded killings. Rick Heizman interviewed certain Hindus in Rakhine State of Myanmar, who luckily survived the devastating Jihadi attacks on August 25th, 2017.

Presenting here the extract of the interviews: 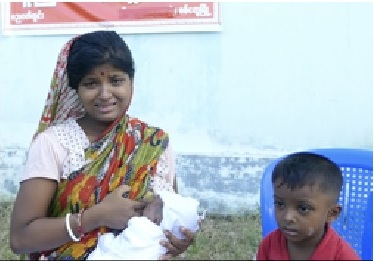 Shara Shati, a Hindu lady was 8 months pregnant when she had to flee her home in Kha Maung Seik Village Tract, Maungdaw Township, Rakhine State, Myanmar. At wee hours of 3:00 am, she and her young son somehow fled into the darkness to the security outpost when the Bengali terrorists stormed her village. She told that later the security outpost was also attacked by the Bengalis, and security personnel had to escape. They brought her to a bigger security outpost.

“I was so pregnant that they flew me in a helicopter to the Army headquarters, and then went to Buthidaung by bus, and after that to the safety of Sittwe.”

She had her baby after a week of escapade, however, she had no idea what happened with her husband, other family members and fellow villagers. She got to know that everyone in her village was brutally murdered by the Jihadis and only 8 girls survived as they were pretty and unmarried. Jihadis planned to marry them to Muslim men and were taken to Bangladesh, but were rescued at the border.

Later she learned that the bodies of her parents, her husband, and her villagers were found buried.

“I lost my husband, and other relatives, and villagers, and my house and my cow and my gold jewelry. Everything is gone, everything.”

A Hindu man, interviewed in Nan Do La village 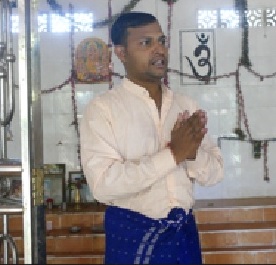 There is no market to buy the basic things like salt, cooking oil and vegetables, so they have to go through the big Muslim villages to a section where Buddhists have a market.

“The Muslim villages will not even sell us these basic necessities. They say such thing as, “You and the Buddhists get along, so don’t bother us you filthy Hindus. We don’t sell things to infidels like you.””

He tells that they couldn’t go alone through those villages. The Muslims often barge into their village and break murtis of Hindu gods, filth around on holy things and shame them.

He fears for his life as well as others’ in the village. He said that there is no security provided to them as these hateful Muslims, who constantly give them death threats, will really kill of them someday. He demands from government to provide them with a safer place or atleast provide a police station with lots of security forces. It is difficult for them to even earn their livelihood due to hostile surroundings. 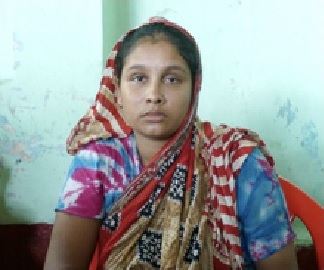 This is a Hindu lady whose husband and other Hindus worked as goldsmiths near Kha Maung Seik village, Maungdaw Township, Rakhine State, Myanmar. Her village was attacked in the early morning of August 25. Recalling the horror she tells, “12 of my family members had been in the village during the attack. The Bengali terrorists had guns and swords. 6 of our family members, out of 12 of us, were killed. I was also shot and wounded with a gun. Some of us hid in empty petrol drums.”

Her husband and her daughter were savagely killed. Her sister-in-law was 8 months pregnant when she was hacked to death.

In her nearby village, all Hindus except 8 young Hindu ladies, were hacked to death. Their husbands were killed and they were forced to see their mutilated bodies. They were told to convert to Islam or die. In sheer fright they agreed to convert. Jihadis even threatened to kill their babies. They were sent to Bangladesh to marry off to Muslims. In Bangladesh they were forced to say that they were attacked by Rakhine Buddhists and Government forces.

She recalls that in Kyauk Pan Du village – a historic Hindu place – the treasured and historic Hindu temples were destroyed by these Bengali Muslims. 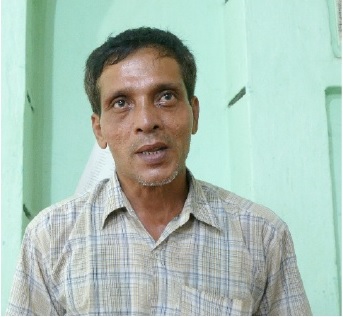 Raza Dura, a shopkeeper from Shwe Zarr Village, Maungdaw Township, Rakhine State, Myanmar recalls that how he was stopped by Bengali Muslims while he was returning from the market. “They took my things and attacked me with swords and sticks. I have many wounds on my back.”

He told his villagers that Bengali are coming to kill the Hindus. They called the authorities for security. They fled the village with the help of security forces, now living in temporary camps. They have lost everything.

Than Than Nu, interviewed in refugee camp in Maungdaw 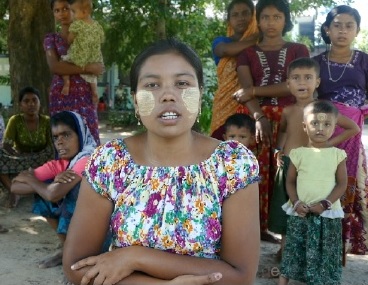 Than Than Nu, from Kha Maung Seik Village tract, Maungdaw Township, Rakhine State, Myanmar worked as a teacher. Bengali Muslims came to her village on August 25, two villagers were hacked and severely wounded. They blocked their village paths, and all exits. They were later rescued by the policemen.

Those terrorists even attacked the police outpost many times. The Bengalis burnt everything, including their houses and shops. She recalls, “All I had is only one set of clothes. I stayed for 10 days with one set of clothes and struggled for food.”

All the villagers from certain villages, including old men, women, and babies were brutally murdered. The dead bodies of children less than 5 years old had almost disappeared into the soil. 45 bodies were unearthed. Among them, 4 were her relatives. Among various horrors, she recalls, “My aunt and her husband were brutally tortured in many ways and also my nephew was tortured first and killed after the Bengalis broke his legs and hands.” 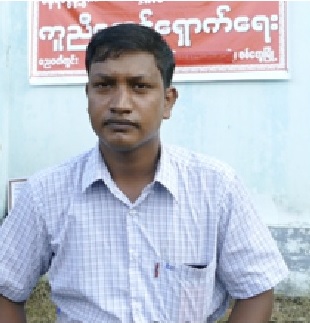 He says, “I want the whole world to know the term ‘Genocide’ does not apply to the Bengali Muslims, but rightfully for our Hindu people. All the villagers from Ye Baw Kya and Taung Ywa were slaughtered by the Bengalis. This was massive killing committed by Muslims. And then, 8 young and pretty Hindu ladies were threatened with death if they refused to convert to Islam. The very frightened ladies accepted this to save their own lives, and the terrorists chose each of the ladies for marriage and took them to Bangladesh.”

Even in Bangladesh, Hindus are in danger. They have lost everything, including houses, cows and all they possessed. All they have is their lives and one set of clothes. On the fateful night of 25th August, 2017, the Bengali Muslim mob started shouting “Islam Zindabad”. They realized then that they had to run for their lives.

As the leader of Hindu victims, he requests the government to resettle the Hindus to a safer place, away from Muslims. Chandrwa Maung Hein from Kanyin Tan Village, Padauk Village Tract, Maungdaw Township, Rakhine State, Myanmar recalls that he lost contact with his son who was followed by Muslims, who tried to catch him, when he went to market.

On 27th August, 2017, around 25 Bengali Jihadis surrounded his house and a few entered his home holding weapons in their hands, such as long knives and swords, pistols, small bombs, and heavy wooden sticks.. They looted the cash, their mobile phones and gold.

“They threatened us to cut our heads off if we did not convert to Islam by the day after tomorrow. Also, before exiting, they forced us to destroyed our holy Hindu shrine and deities, and told me not to keep and not to pay homage to our sacred deities. They ordered us to “destroy immediately. Destroy your pagan shrine and idols immediately and if you want to live here, you must change your false religious into our superior Islam””

One of the terrorists who entered his house, was a leader of the RSO (Rohingya Solidarity Organization – terrorist group), named Adu Habist. 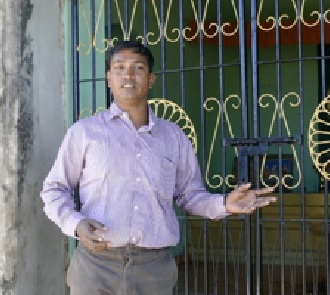 “They look like us – we are all Bengali-speaking but they bring all kinds of trouble to us. They always say their Muslim religion is the best, and all of us Hindus are infidel idol worshippers. Sometimes they kill Hindu people – for no reason.”

Now there are only about 15 Hindus left around here. 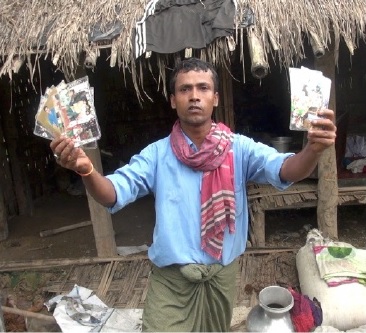 This Hindu man was one of the only survivors of a Hindu village in Rakhine State, in which the Islamic terrorists herded the people together, tortured and executed almost everybody –women, children, men and elderly. He survived because he had been staying in the town of Maungdaw, several hours away, on that fateful evening.

“We, the people of Taw Ywar Village, with over 100 people, were killed by Bengali Terrorists. Four members of my family were killed here. They KILLED us.”

When he arrived home, he could see it has been destroyed. The photos of his family and the monastery were all ruined. Four people out of his five family members were killed, his brother-in-law’s wife was taken to Bangladesh and the only ones who survived was him and his wife.

When he heard about the massacre, he searched for his people with the help of the police and the port office. They found 28 dead bodies of Hindus including both adults and children. The dead body of his mother was one of them.

“These Bengali terrorists are always giving trouble to us. They are intruding into our country with the intention to conquer it. When they kill Hindu people, they think they are doing their duty and shouting their Muslim words while killing our Hindu people.” He was kidnapped on April 25, 2016, taken by boat across the wide Naf River, to Bangladesh, in the darkness. They knew that he was leader of the Hindu minority, and that the Hindus would have to come up with big money to get him back.

“I was taken to what seemed like a terrorist training camp. I was beaten everyday for 8 days, and told that they would cut off my head if money did not come. They said that the Hindu people were a problem for the Bengalis because the Hindus get along with the Buddhists, and interact with each other. I had to call my brother in Myanmar, and he had to collect money from our poor Hindu villages. On day 9 he arrived with the money (over $10,000 USD) and I was freed.”