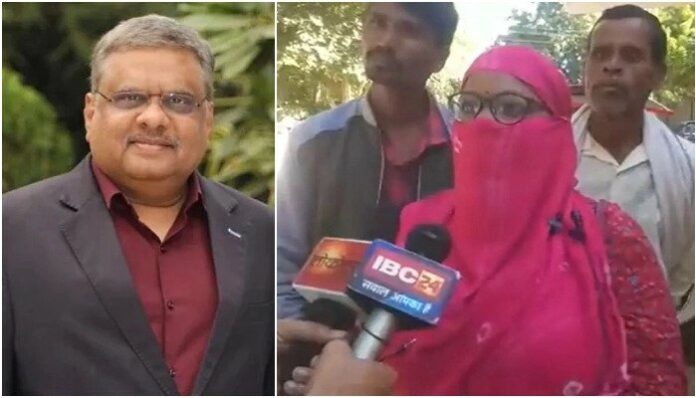 An SC family has alleged that they were forcibly converted to Christianity by Bishop Dr Ajai Lall and Church authorities are now harassing them. Legal Rights Observatory (LRO) shared a video showing the woman confirming that Lall and his men offered money to her family to convert to Christianity. The case is from Madhya Pradesh’s Damoh.

This is one of the several fraudulent conversion cases reported from Madhya Pradesh (MP). 10 members of a Christian organisation were booked for forceful religious conversions in an earlier case. The FIR was filed after NCPCR (National Commission for Protection of Child Rights) took cognizance of the matter.

The woman further alleged that her family members were asked to attend Church and follow Christian religious practices. Church authorities started harassing them after they failed to comply with their orders. The church authorities also troubled them for not attending church. Furthermore, the family was threatened and asked to pay four times the money given to them for conversion.

“They initially converted us forcefully and gave us money Rs 1,20,000. They also asked our family to attend the Church service and stop following the Hindu religion. We initially attended the Church sessions but later we could not. So they began threatening us that if we fail to follow the Christian religion, they’ll recover the amount they had offered earlier, with four times of interest”, the woman is heard saying in the video.

The woman said she and her husband were dipped in the tank and the Bishop placed his hand on their heads. Later, they were asked to get their family members to the church for conversion. She said they have returned 90000 rupees and would be returning the remaining money. However, church members, Thomas, Keviju, Flexen, Rinu, and Sajan are demanding 120000 rupees.

The woman said the authorities failed to take any action against the Bishop and his followers although she had registered a complaint against Lall and other church authorities with the Damoh police.

“Damoh Collector S Krishna Chaitanya, Superintendent of Police D R Tenivaar, and other administrative officers were making attempts to favour and save Bishop Ajai Lall and his followers from the case. District collectors follow Bishop Ajai Lall and used to work for one of his FCRA license-attained NGOs. Madhya Pradesh Home Minister needs to look into the matter very seriously”, OpIndia quotes LRO.

MP DGP has been directed by NCW (National Commission for Women) which took cognizance of the incident to file an FIR in the matter. Furthermore, NCW chairperson Rekha Sharma demanded a thorough investigation and arrest of the accused if they were found guilty.

“As stated earlier, this is the second case of alleged forceful conversion appearing from the Damoh district of Madhya Pradesh. Earlier, NCPCR chairperson Priyank Kanoongo had filed a complaint against ten members of a Christian organization named Mid India Christian Society in Damoh. Kanoongo in the complaint had said that several Hindu minor students residing in the children’s home of Mid India Christian Society were converted to Christianity and were forcefully being kept away from studies. They were being lured by the missionary authorities to become a pastor in the future”, reports OpIndia.

Kanoongo learned about the case during a surprise visit to the Mid India Christian Society-run children’s home. He found that there were several irregularities in the organization’s functioning and even the home couldn’t produce the legal documents.

“There were 91 children registered in Mid India Christian Society, of which 45 were present. Most of these children are Hindus and some are Muslims, but they were all being taught teachings of Christianity. The organization did not even have proper documents for its functioning”, the FIR reads.

A case has been registered against 10 persons under sections 42 and 75 of the Juvenile Justice Act and 3 and 5 of the MP Freedom of Religion Act and IPC section 370. Interestingly, Lall’s anticipatory bail was rejected by the Damoh court on November 17. The police confirmed that further investigation into the case is underway.

It has also come to light that the accounts of one of Lall’s FCRA-licensed NGOs were looked after by the Damoh District collector’s wife. She was associated with the NGO’s activities till a probe was launched into the organization’s financial transactions by the Union Government. The Centre found that the NGO was engaged in proselytization and also violated FCRA laws.

Bishop Ajai Lall had connections with several authorities including Collector S. Krishna Chaitanya. Lall also received an award for ‘social service’ activities given to him by Minister Govind Singh Rajput on August 15. Collector S. Krishna Chaitanya reportedly nominated him for the award last year at a time when Lall’s NGO was being scrutinized by the central government. IBC24 reporter Jitendra Gautam exposed the association between Bishop Ajai Lall and Damoh Collector. He was threatened by DC PRO Y Qureshi.

In the present case, the SC woman has filed a third complaint with the police against Bishop Ajai Lall and his followers. Damoh SP D R Tenivaar was approached by the woman who has asked for a probe. SP Tenivaar has assured the woman that the matter would be investigated.