What is the True Story Behind The Arrest of PostCard.News Founder Mahesh Hegde? 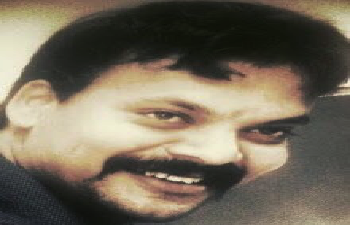 India Today, Firstpost and other MSM outlets have reported that Mahesh Vikram Hegde was arrested because of alleged fake news about a Jain Monk being  attacked by Muslim youth. India Today report says that this news was ‘published on PostCard News’ (implying it was featured as an article on the website postcard.news), whereas Firstpost tells us that Post Card News had ‘published a status message on 13 March on social media’.

The news of this arrest has gone viral across Mainstream Media and liberal digital media outlets, with most of them willy-nilly branding Post Card a ‘fake news site’ or ‘RW propaganda website’ Digging further, the whole episode was triggered by a report in a Jain publication, Ahinsa Kranti,  that Sri Upadhyay Mayank Sagar ji was walking towards Kanakpura when an unknown person on a two-wheeler, who has apparently drunk, hit his left shoulder thus injuring him.

NewsMinute has corroborated this version of events, quoting a police official as saying – “Yes, it is true, he was arrested based on the Jain muni post. The Jain muni was hit by a bike while he was walking on the road. He was not hit by Muslim youth as claimed by Hegde,” said the police official. As far as we can gather, police has not confirmed and neither has any MSM probed with police whether the bike rider has been identified or arrested.

News Minute also tells us that Mahesh Vikram Hegde was arrested based on two complaints – one of which was filed on March 18 by Gaffar Baig, the General Secretary Bengaluru District Congress Committee, regarding the Jain monk incident. Another complaint was filed in Sanjay Nagar against an article in Kannada published by Postcard News about two iconic women from history – Rani Chennamma and Onake Obava. So the political vendetta behind this arrest is hard to miss.

1.) Firstpost, whose report was sourced from NewsMinute, wrongly stated that the FB post in question was made on 13 March (it was actually made on 18 March)

2.) The same Firstpost report quotes a police officer as saying that the Jain monk was hit by a car – he was actually hit by a 2-wheeler

3.) The NewMinute story, which the Firspost article references, now states something totally different –  more likely that the NewsMinute story was corrected after initially reporting the wrong facts which were picked up by FirstPost. Here is what NewsMinute article reads as of today – 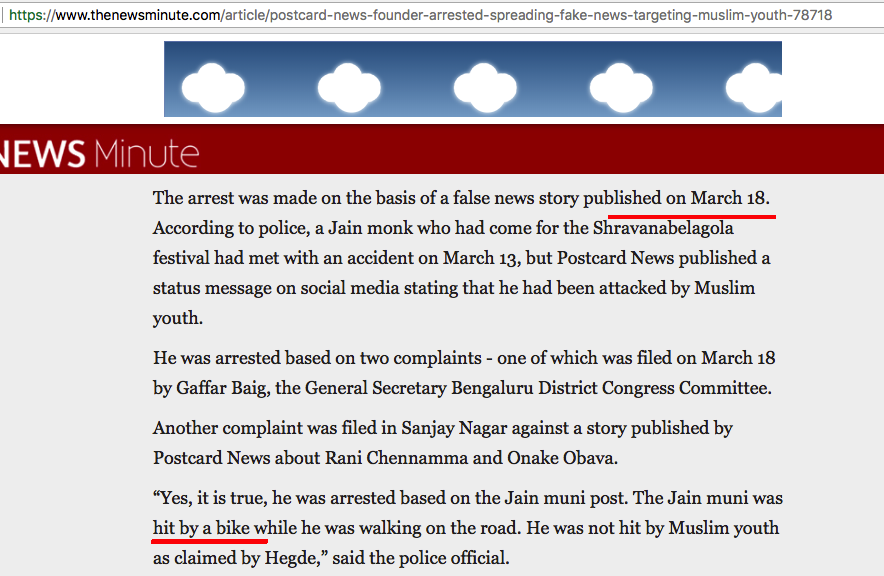 There is nothing wrong if NewsMinute has indeed updated their original report, but then they have failed to follow standard industry practise of adding a correction note at the end. For eg., this is how HinduPost has handled corrections in the past (apropos this article)  –

4.) Apart from wrongly implying that the alleged fake news was published on the Post Card News website (it only appeared as a post on PostCard’s Facebook page), India Today even got something as simple as the name of the Jain monk wrong (Muneer instead of Mayank) –

This is the sad reality of our MSM, which has huge corporate budgets, state-of-the-art technology and veteran editors at the helm.

If PostCard has indeed made a mistake, it is not worse than what the MSM does everyday. Veteran journalists have been guilty of far worse, despite having all the contacts and resources at their disposal to verify a story. The first person in the SM universe who held up a mirror to MSM was the Mediacrook blog; OpIndia has been tracking MSM fake news on a regular basis, True Picture does a great job in busting fake news too. We at HinduPost have also tracked such MSM lies, few samples below –

But all this fact-checking still fails to keep pace with the mind-numbing pace at which MSM churns out fake news. It would require a team of dedicated people separately tracking each individual media conglomerate & outlet like Indian Express, Times of India, Hindustan Times, NDTV, The Hindu, Scroll, Wire, Print etc to uncover the true depth of their chicanery. This must-read piece by Rati Hegde explains what gave rise to digital media sites like PostCard.News

We have seen how bigoted and agenda-driven journalism has dominated news coverage of sensitive issues like the Catholic nun rape & robbery case in West Bengal when 100s of opinion pieces/editorials painted it as Hindu/RW act to bolster their  ‘Christians Under Attack’ agenda – only for it to be later proven that a gang of Bangladeshi Muslims was behind the dastardly act.

If Mahesh Vikram Hegde deserves to be jailed for an allegedly factually incorrect post on Facebook, then what should be done about the leading lights of our journalistic community who have destroyed the faith and trust of the entire nation, in what is supposed to be the fourth pillar of democracy – the media?