National media of Bharat plumbed new depths when a senior news editor with mainstream news TV channel CNN IBN was caught spreading a doctored (photoshopped) image with the intent of defaming PM Modi, and hurting Bharat’s image in the process.

The journalist Raghav Chopra had tweeted a photshopped image where it appears that PM Modi is bending to touch the feet of Saudi King Salman bin Abdulaziz Al Saud. The original photo was actually of Modi touching veteran BJP leader Lal Krishna Advani’s feet. Does the CNN IBN tagline ‘Whatever it takes’ encourage their employees to resort to any and every means to fulfill their commercial agenda of maximizing profit?

PM Modi is currently on a state visit to Saudi Arabia. In any other country, the national media would usually be supportive of diplomatic efforts of their Government, and even act as extended arms of a nation’s foreign policy to further the national interest. But not in Bharat. Here, a vocal majority in our national media (English language channels like NDTV, IBN Live, Headlines Today, and Hindi channels like Aaj Tak, Star News) have allowed their left-liberal tilt, visceral hatred for Hindutva in general & Narendra Modi in particular, to completely cloud their  editorial judgement & hurt Bharat’s interest. So what Raghav Chopra did does not come as a surprise – after all he is working at IBN Live, a media house which till recently was home to two of the biggest Modi baiters: the husband-wife duo of Rajdeep Sardesai & Sagarika Ghose.

This brazen act of Raghav Chopra was ironically first exposed by veteran journalist Kanchan Gupta, who minced no words in expressing his shock-

Surely @ibnlive can do better than such a shoddy Photoshop job to defame PM @narendramodi and demean India? pic.twitter.com/XZiEteUNdu

Spurious photoshopped image hurts India. But @ibnlive editor does not care. Such is hate towards PM @narendramodihttps://t.co/Yg8yuMkZzr

Predictably, Chopra scrambled to cover his tracks once his lie was exposed. His bio which once proudly proclaimed his association with IBN Live and other media houses in the past, was cleansed of all such references. But sadly for him, such things are impossible to hide in the social media universe

@UnSubtleDesi@AarSee@ibnlive previously this was the bio, now it has changed. pic.twitter.com/pZvt7brbQf 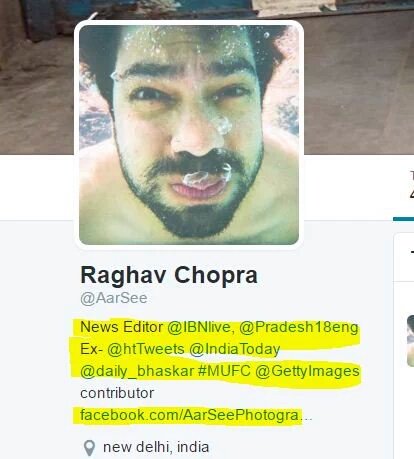 Sadly, this is just another instance of news professionals becoming the news, rather than doing their job of objectively reporting facts. And self-regulation by media has proven to be a complete farce as the toothless News Broadcasters Association (NBA) (which represents the private television news & current affairs broadcasters) has failed time and again to weed out the rotten apples which seem to dominate Bharat’s news journalism (both print and electronic).