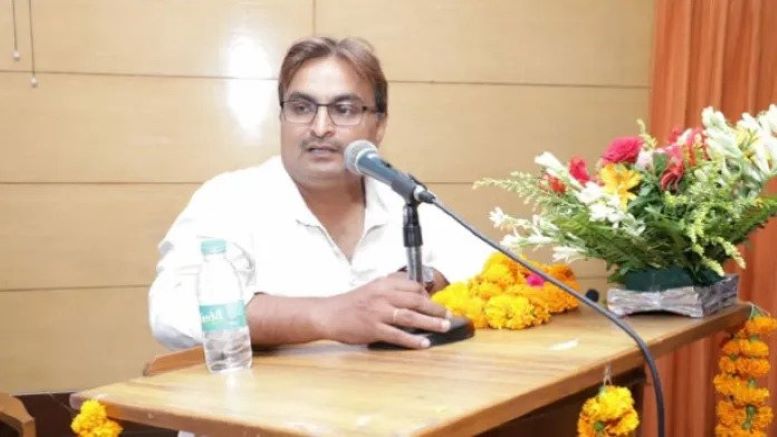 An FIR was filed against Professor Ravi Kant Chandan of Lucknow University’s Hindi Department on May 10 for reportedly making defamatory comments on Kashi Vishwanath Mandir and Hindu priests. The professor made the comments when he participated in a debate on former AAP member Ashutosh’s YouTube channel Satya Hindi.

The FIR was registered at Hasanganj Police Station on the basis of the complaint filed by Lucknow University student Aman Dubey residing in the Lal Bahadur Shastri (LBS) hostel. Dubey’s complaint stated that Prof Ravi Kant made indecent remarks during a debate that took place on May 9. Ravi Kant was booked under sections 153-A, 504 and 505(2) of the Indian Penal Code and Section 166 of the Information Technology (Amendment) Act.

Dubey said that the professor had not just hurt Hindu sentiments but also attempted to vitiate the harmony of the University. He also alleged that when Ravi Kant was confronted by students after the video was leaked, the professor called goons who tried to assault the protestors. “Apart from this, malpractices are being done through social media. Due to this, the image of the University and the students are being tarnished”, Dubey said asking the police to take action against Ravi Kant in accordance with law.

Highlighting the story peddled by the Professor during the debate and the book from which it was taken, OpIndia notes:

There is a section by the name “Aurangzeb and the Benares Temple” in the book on page 177. The book alleged that though Aurangzeb is called a bigot in religion, there was a story about why he demolished the temple. The author of the book alleged that once Aurangzeb went to see the Kashi Vishwanath temple. A Queen of Kutch was with him. When they were returning, the Queen went missing.

Upon searching for the, she was found in the basement of the temple. The book reads, “It turned out that the Mahants were in the habit of picking out wealthy and be-jewelled pilgrims and in guiding them to see the temple, decoying them to the underground cellar and robbing them of their jewellery. What exactly would have happened to their life, one did not know.”

It further stated Aurangzeb, after watching what was happening in the temple, ordered to demolish it. The Queen, who was saved, insisted on building a mosque in that place. The author claimed the story of Varanasi Mosque was in a rare manuscript in Lucknow in possession of a “respected Mulla”. The respected Mullah had promised a friend of the author to hand over the Manuscript, but he “without fulfilling his promise”.

Now there are two points that need to be considered. First, Prof Ravi Kant himself said during the debate that there was no way to prove the story. However, he still used the derogatory and anti-Hindu story as an excuse against the Hindu devotees who wanted access to the mosque.

Secondly, the book he referred to cannot be seen as proof for the story is real or not. The author himself said he only heard this story. There is no mention of the alleged Manuscript anywhere in any documents available online except it is being mentioned by the left-liberal historian. A similar breakdown of the story was done by Dharma Dispatch in one of their articles. Sitaramayya’s book is often used as the “documentary” evidence of the story. The story was told to him by some “respected mullah”.

Such fake and baseless stories are often peddled by anti-Hindu cabal to whitewash Islamic fanatics like Aurangzeb. Contemporary Islamic records are ample proof of the bigotry of Islamic rulers which are conveniently ignored by the cabal who have deep-rooted Hindumisia.

The Maasir-i-Alamgiri clearly states that Aurangzeb Hindu Brahmins of Benares teach their ‘false books’ in the universities which has an impact on Muslims as well. The emperor wanted the spread of Islam alone and therefore he ordered his subedars to destroy the universities and temples. He also banned the puja and education of the Hindus.

Akhil Bharatiya Vidyarthi Parishad (ABVP) members staged a protest against the Professor at Lucknow University demanding his sacking. The University administration also sought an explanation from Ravi Kant in the matter.

When everything else failed, Ravi Kant resorted to playing the victim card. He filed a complaint alleging students attempted to ‘lynch’ him. “In the debate, I spoke about the matter taking context from Historian Pattabhi Sitaramayya’s book. It has been twisted and shared on social media by ABVP and other students. They circled me in the University today and tried to lynch me. They used derogatory words and slogans like ‘desh ke gaddaron ko, goli maaro saalon ko’ against me. I am a Dalit. They used casteist remarks against me. It is an assault on my fundamental rights, right to live and right to expression”, he said.

As is their wont, Islamist-leftist-liberal cabal jumped to the professor’s rescue furthering the ‘dalit being attacked’ narrative. Media houses such as The Wire, Scroll, Hindustan Times, Indian Express and others, leftist AISA UP, ‘activist’ Sandeep Singh, and ‘journalist’ Saba Naqvi were among those who termed Ravi Kant a ‘Dalit Professor’ and rushed to his aid.