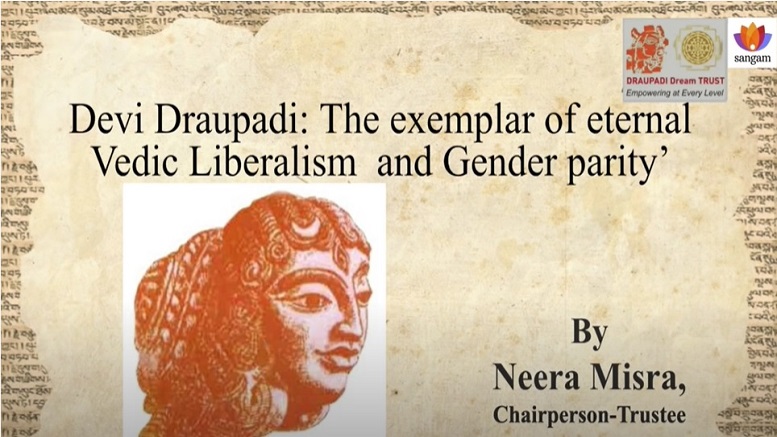 With the hype and hoopla surrounding Internal Women’s Day (March 8), here’s a counter narrative by Neera Misra, well known Mahabharata scholar, and Founder Trustee of the Draupadi Dream Trust, on how Draupadi  exemplifies the spirit of a liberated  and empowered woman in the true sense of the term. Excerpts from her Sangam Talks series :

I’d like to begin by stressing something which is there in the beginning of the Mahabharata that the problem we have faced for many centuries is that we have been told all our books like the Puranas, the Mahabharata, the Ramayana  are ‘mythologies’, not historical. And we have, with the help of a lot of scholars, finally proved at a conference called Mahabharat Manthan with historians that it is history.

First, on how the Vedic people defined empowerment and how Draupadi carries forward that empowerment. Today, what we imagine Draupadi to be, is based on misperceptions, and that is why, unfortunately, there is no temple to Draupadi in her birthplace Kampilya and in the place of  her rule in Indraprastha.

And I’m sure everybody’s mind and conscience will be shaken today. And they will realise the need to get together for our mission to get Draupadi her due status. And today, if we do not restore the character of Draupadi  to her real, true status, unfortunately the crux is we will be facing the culture of  gender disparity. Therefore,  the  Vedic culture  that gives women equality of status and respect has to be restored and Draupadi is the leading light for that.

Our Vedic  knowledge are the  threads  that string together the pearls of wisdom that give us the eternal unifying sanskriti we call sanathan sanskriti. The Vedic  city of Kampilya, the capital of Panchala Mahajanapada, is credited with having given us great scholars who contributed to  writing  the format of the Vedas and works like Karmakanda, Ayurveda and Upanishads.  This land has also given us women of learning and divine stature, their lives reflecting the values of empowerment.

Among the many examples of ancient women, Devi Draupadi stands tallest. I want to take you through some aspects of her life and show how it’s relevant and her contribution as an exemplar of Vedic philosophy and how it its relevant today.

Some Vedic concepts about women: If we know our Ramayana, Kaikeyi was the sarathi  or charioteer of Dasaratha, before she got married to him.  And all these women, they knew shastras; the warfare shastras or the use of weapons. And hence all this is so much part of Vedic society and literature. Why have we failed to take this forward? And today, women have to fight to be in the army!

The shaastras also laid out equal rights for women and men to claim their space and voice in the sabha or assembly. Remember, Draupadi in the sabha? The shaastras also clearly state that only an educated woman can help her husband move forward in life.  The shaastras state “Yatra nari astu pujyante, ramante tatra devata” (The Gods reside in places where women are worshipped.)

The Rig Veda says, “The home, has verily, its foundations in the wife.”

“The wife should do the Agnihotra, Sandhyavandana and other daily religious rituals.  If, for some reason, her husband is not present, the woman alone has full rights to do yagna.”  (Rig Veda Samhita Part 1, Sukta 79, Sloka 872).

This is how our ancient texts regarded women and that is why it is not surprising that we have exemplary women who were well known philosophers and seers who happened to be women such as  Lopamudra,  Anasuya, Gargi, Maitri, Ghosha, Madalasa, Ahalya, Sita and other  exemplary women.  However, sadly, we have been deprived of our knowledge and so we are facing these problems.

The commentator Mahidhar says that the “women of Kampilya were learned and beautiful.” Kampilya was a centre of Vedic learning.  It even had a university, much before Takshashila.

Who is Draupadi and how does she embody women’s empowerment according to Bharatiya sanskriti?  Very few people know that Draupadi is a manifestation of Parvati. According to the Mahabharata and the Kampil mahatmyam, Shiva was facing problems with Bhageeratha trying to get Ganga on to the earth. As he could not give time to Parvati, during that period, she gets annoyed.  There is an interesting sculpture in Dakshin Bharat, where Parvati is separated from Shiva. He then curses her to go down like Ganga and she refuses because according to her, she would be unable to live without him.

And then he says, “I will not sacrifice you. I will meet you in another life. You will be born to the Chandravanshi King Drupada and I will reside in the heart of Arjuna and come in different forms to meet you.” This is also the story that links Draupadi to the five Pandavas.

We also need to clear several misconceptions surrounding the birth of Draupadi. It is said that Drapuadi is yajnaseni and the common perception is that she emerged out of the havan or sacrificial fire. However, the  actual story of her birth is quite different. Drupada lost half his kingdom in a battle with Dronacharya. Hence, he wanted to regain his kingdom by performing a yagna and get a yodha son. He goes to Yaja, the well-known expert in yagnas and tells him about his desire for a yodha putra, that is also endorsed by Yaja. However, when Drupada tells Yaja, “Now I am going to kill Dronacharya,” Yaja backs out and refuses to perform the yajna because according to him, he did not do yajna for negative things.

Hence for one year, Drupada does penance at the feet of this Mahaguru; does the upaay and finally is connected to the upayajna, his assistant. They do the yajna according to the norms. The queen is supposed to take the prasadam or the sacred offering at the end of the havan. Unfortunately, she is a little late and is blessed with twins. When we refer to Draupadi as yajnaseni and agniputri or daughter of the fire, it is a symbolic way of saying she was born out of the great penance and sacrifice of a yajna and she acquires the qualities of an agniputri. She acquires the qualities of a yodha.

The Itihasa-purana tradition is deeply symbolic. Therefore, we have to understand our ancient texts in practical terms to be able to relate it to contemporary times. Draupadi had a biological birth. However, she is referred to as yajnaseni and agniputri because she symbolizes the power of the yajna. Like gold out of fire, she was pure, bright and reliable.

There are two aspects of Draupadi’s swayamvar that need to be placed in perspective.  The first is her alleged insult of Karna and the second, that she had five husbands. Academicians have been very good to her and analyze her in their writing. However, the main problem with academicians is that it is also  their duty to  go to society and tell them the truth! Because  it is relevant!

The truth is that Draupadi did not insult Karna. The very essence of swayamvar is that she has the right to choose a husband of her own choice and status.  When she says “No” to Karna, she is not aware  of Karna’s true  royal status or the circumstances that led to his adoption.  Is that insulting? No, she was only exerting her right to refuse.

Regarding the issue of five husbands, Draupadi accepts the condition because Sri Krishna tells her to do so when Kunti stipulates the condition. Further, Draupadi was never disrobed in the Kaurava assembly. In those days, women did not wear saris. They wore an angrakhan or an upper and lower robe which was pulled.  At the Pandava palace, Duryodhana was taken around by the palace maids. He apparently slipped and fell into a virtual pool that elicited laughter from the maids. Later while recalling the incident, he  said, “She laughed.” This cannot be attributed to Draupadi’s laughter.

Draupadi thus was the victim of the Kurukshetra war and not its cause as has been incorrectly portrayed. She was a true ardhangini or the better half in a relationship based on equal partnership  and a liberated woman who was a pillar of strength and support for her family. In fact, during the agyatavas or the exile of the Pandavas in the forest, Draupadi refuses to play the victim card. Instead, she marvelously adapts to circumstances by even working  as a hair dresser to the  queen!  She demonstrates tremendous resilience and strength of character in dealing with adversity.

Finally, her friendship with Krishna is very critical. It is well known that Krishna called her his “sakha” or friend. An evolved woman, her platonic relationship with Krishna was even respected by her husbands. Sri Krishna, who gave the Bhagavad Gita to the world, gave Draupadi the status of an intellectual equal. Being dark complexioned, Draupadi was also known as “Krishnaa” and was as dear to him as his sister Subhadra. This is a powerful example of a man-woman relationship that is even more relevant in contemporary society.

Draupadi thus embodies several characteristics of  women in Vedic society: educated, assertive, and empowered in the true sense of the term. Draupadi deserves due respect as an educated, empowered woman. Intelligent, energetic and educated, she  was  an ideal daughter and daughter in law, yet progressive and liberated. Draupadi was thus much more than  the wife of five husbands who was disrobed in public. She was a victim in the Mahabharata and not the cause of the war.

“Its time we stopped using Draupadi as a metaphor for a woman who is raped in a contemporary context. It’s time we educated people like Alfred Ford to desist from branding Draupadi as the cause of the Mahabharata war. Until we restore her true picture in the mindset of people, women cannot overcome the curse of wrongful propagation and subjugation. Respect Draupadi. Respect women.”