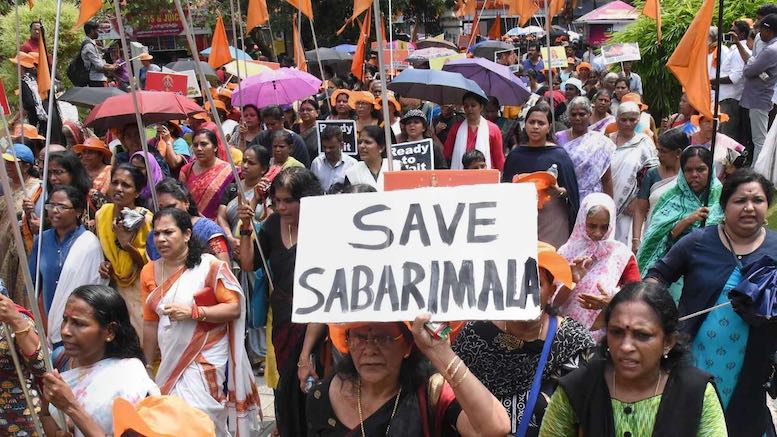 BJP led NDA alliance has won the municipal council elections in Pandalam, the town where Sabarimala temple is located. However, ruling CPM led LDF is comfortably ahead in the overall Kerala local body polls, counting for which started earlier today.

BJP won 17 of the 33 wards in Pandalam municipal council, improving on the 7 seats it won in the 2015 elections. This victory at Pandalam is significant as this town in the Pathanamthitta district of Kerala is the home to the famous Sabarimala temple.

The temple became a centre of controversy following a Supreme Court (SC) ruling allowing entry of women of all age groups into the Sabarimala temple, overriding the faith Hindu devotees who regard Sabarimala as a unique temple dedicated to the deity Ayyappa in his student form wherein he practises Naishtika Brahmacharya (staunch celibacy) and thus women of menstruating age avoid going to this particular Ayyappa temple alone.

The temple has long been on the radar of missionaries, who in 1950 were suspected of engineering a fire that engulfed the temple! Even the initial petition to end the timeless tradition of the temple in name of “women’s rights” was filed by majorly non-Hindu or atheist petitioners.

Millions poured out on the streets chanting “Swamye Saranam Ayyappa”, with women at the forefront, in peaceful protest against the SC decision, only to face a brutal crackdown from the CPM government. Hindu groups later appealed the SC decision and the matter is currently pending before a larger bench of the Supreme Court.

Additionally, the BJP has retained power with a clear majority in Palakkad municipality. The BJP has won 28 of the 52 seats in Palakkad. In 2015, the BJP was short of a majority with 24 seats in the council.

A total of 21,893 wards in 1,200 local self-governing bodies, including six corporations, 941 village panchayats, 152 block panchayats, 14 district panchayats and 87 municipalities went to the polls in three phases on December 8, 10 and 14.

BJP-led NDA is looking at making inroads into the bases of both UDF and LDF, by giving “secular” signal to the ‘minorities’ of the state. Muslims and Christians constitute close to 50% of Kerala’s population, and Muslims overtook Hindus in absolute live birth numbers in 2016.

As per reports, the Church and a section of Christian community leaders in Kerala, so far lenient towards the Congress-led UDF in their political choices, have been uneasy over the increasing influence of the Indian Union Muslim League in the Congress-led UDF. A section of the Christian leadership has also now started voicing concerns such as ‘love jihad’ and possibility of demographic change.

While the LDF is likely to maintain the overall lead in these local polls, the BJP’s victory in some key towns is a signal that the upcoming assembly election could witness a triangular contest.