Legend behind Sabarimala, and arson conspiracy of the Missionaries 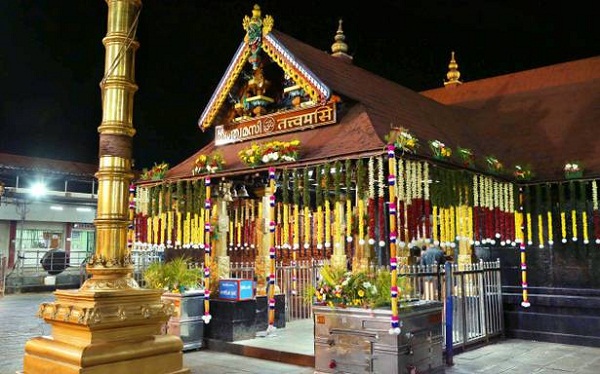 Sabarimala Temple, a renowned Hindu pilgrimage, has become the target of feminists, left-liberals, and anti-Hindu elements. It is being disparaged as a woman-hating pilgrimage destination, and Bhagwan Ayyappa is being projected as a misogynist who dislikes women of a certain age.

After years of arguments, last year the Supreme Court ruled that women of all ages could visit the Sabarimala temple, thereby smashing the unique beliefs and traditions of Sabarimala devotees, and dismaying millions of practising Hindus. The verdict has now been referred to a larger Constitutional bench after a bunch of petitions seeking review were submitted in the Supreme Court. To understand why it was wrong for the apex court to interfere in the matter of religion, one needs to know about the legend of Ayyappa Swami .

The Legend of  Ayyappa Swami

Ayyappa Swami was born to kill a malicious female demon. After he killed her, from her corpse rose a Goddess Malikapurathamma, a paragon of beauty who proposed to Ayyappa. The celibate god graciously denied the proposal as he had to first answer the prayers of his devotees. But seeing how heart-broken she was at the rejection, Swami promised to marry her after having fulfilled all the wishes of his devotees who had lined up at Sabrimala to see him; the goddess agreed to wait.

It is believed that Malikapurathamma has since been waiting for Ayyappa Swami. To honor her prolonged wait, Ayyappa’s words and his pledge of abstinence, women of reproductive age volunteered to refrain from visiting the celibate God. They wished for his return to Malikapuratgamma after the completion of his task, without having any other woman come between them.

Unlike what secularists with half-baked knowledge claim, this does not show abhorrence for women in Hindu culture, instead it demonstrates the compassion Hindu women held for a fellow woman, that is rooted in the tradition of Sabarimala. Little girls, who had yet to reach puberty were considered daughters, women beyond menopause as mothers, hence they could pay their visits to the celibate God.

The abode of Ayyappa Swami had come under attack many times, at times at the hands of the Christian missionaries too. The temple which had no surrounding habitation for an adjoining stretch of 10 to 15 miles, was attacked on June 16th, 1950. It was found in wrecks, the murti was severely damaged, and the store room was razed down due to fire. Possibilities of accidental fire were ruled out as the temple was very well kept.

The DSP and other parties that had investigated the case observed 15 cut marks on the door leading to the  Sreekovil, with the murti’s head, left palm and fingers being severed.  It was evident that this was a plotted conspiracy; a hate crime against the religious sentiments of the Ayyappa devotes.

As per the enquiry report of Shri K Kesava Menon, on Sabarimala Temple Arson Case,

“From the examination of the scene of occurrence and attendant circumstances, it was possible to come to a conclusion that the offence was a deliberate one well-conceived and executed. There was a touch of open vandalism and desecration was the only purpose.”

After an exhaustive investigation on members of all communities, careful arguments being offered against and in support of each; it was deducted that this was not the doing of one person;  travelling through the dense forest, destroying the place and returning needed a group of people who were not only familiar with the route but also had a deep hatred to commit the crime.

It was well established that Sabarimala Temple, which was revered and visited by Hindu devotees of all castes, had become a huge road-block for the missionaries of Kerala.

“…Christians have got more familiarity and knowledge than the Hindus in this direction, as they and they alone occupy the places at the base of these hills and they are the only persons who hunt and poach in the vicinity of the temple day in and day out.”

Further investigations unraveled that converted Syrian Christians/Roman Catholics were likely behind this attack. These investigations uncovered remnants of several other temples ruined to dislodge the Hindu faith from the state and convert it into a breeding ground for the foreign-aided Christian missionaries.

The dismantled stone murti of Swami Ayyappa was then replaced by a five-metal murti. The temple’s sanctum sanctorum now has a gold-plated roof. A dhwajam was also installed in the late 1960s.