The evangelists or Christian missionaries have always spread hatred against Hindus by insulting the Gods worshiped by them – calling the followers of Hindu Dharma as Satan worshipers. The early European Christians who had contacts with the Hindus and their practices considered Hindu Gods as evil beings. For example Italian traveler Ludovico di Varthema (early 15-16th century) calls the Gods worshiped by Zamorin kings of Calicut as devils:

” The King of Calicut is a Pagan, and worship; the devil in the manner
you shall hear. They acknowledge that there is a God who has created
the heaven and the earth and all the world; and they say that if he wished
to judge you and me, a third and a fourth, he would have no pleasure in
being Lord; but that he has sent this his spirit, that is the devil, into this
world to do justice: and to him who does good he does good, and to him
who does evil he does evil. Which devil they call Deumo (Deva)
and God they call Tamerami (Thampuran, ‘Lord’) . And the King of
Calicut keeps this Deumo in his chapel in his palace, in this wise: his
chapel is two paces wide in each of the four sides, and three paces high,
with a wooden door covered with devils carved in relief. In the midst
of this chapel there is a devil made of metal placed in a seat also made of metal.”

He continues calling the Devatas worshiped by Hindus as demonic beings throughout. This description of course comes from unadulterated pan-Abrahamic  hatred against Polytheists, Idolators and other Pagan worshipers

Coming to modern era, a new Christian website in Malayalam has appeared, calling Hindu Devatas as Satans. This site specifically targets the Hindu Deva Ayyappa or Dharma Shasta. Ayyappa temple at Sabarimala is a famous temple which has been frequently attacked by anti-Hindus (we had written about it earlier). This new site calls Ayyappa as Satan. The missionary apologists will claim the misunderstanding comes from the name Chatthan (Tamil variant of Shasta) and it’s similarity with the term Satan. These two terms of course have no links with each other, and both have different roots. Ignoring this fact, the author goes on mocking Hindu Devatas. 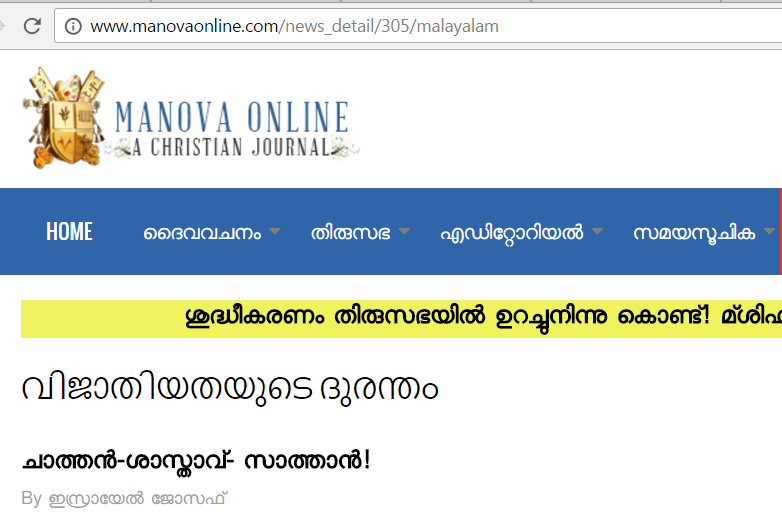 Here he calls Aravana Payasam (delicious desert prasada from the temple) as waste of Satan!

Here the shameless author calls Shiva and Vishnu, the main Hindu Gods as satans, including Ayyappa/Shasta.

He further says Hindu Itihasas i.e Mahabharata and Ramayana were copied from Greeks, and Hindus copied their ‘demonic’ deities after the Greeks themselves abandoned them (in reality fanatical Christians waged their crusade against original Greek Pagans).

So those Hindus who view these extremist Christian crusaders as less of a threat compared to the jihadists must wake up and take action against this sort of mockery of Hindu Dharma. If jihadists want to establish a global caliphate by wiping off non-Muslims, then Christian crusaders  want to establish global Christendom by branding every other religion as ‘satanic’ and thus deserving to be wiped off.

It is upto Hindus to fight for their deities and self respect, and respond to these attacks by the monotheists against Hindu Dharma – the only ancient religion in the world which is yet to be completely destroyed by such type of direct and indirect attacks by the hate-mongering missionaries of monotheism