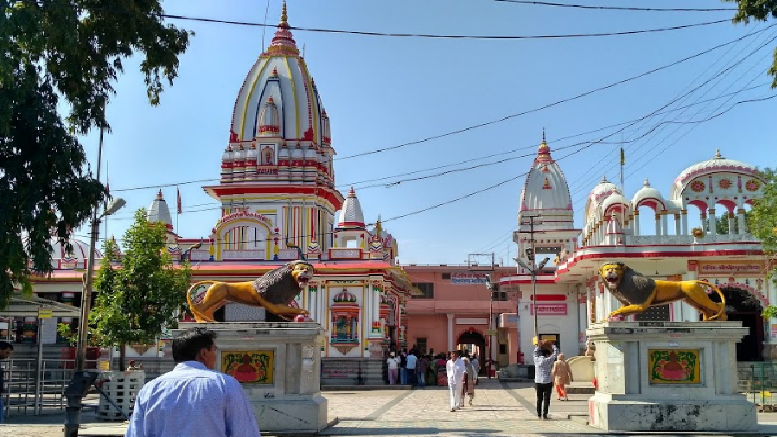 At the time of the birth of Shri Krishna in prison in Mathura as 8th Child of Devaki–Vasudeva, Maha-Yogini Mahamaya has taken birth at same time at Nanda–Yashoda‘s place in Gokul. As per the instruction from Bhagwan Vishnu, Vasudev had replaced baby Krishna with this girl child of Yashoda.

When Kansa tried to kill this baby girl child she escaped from the hands of Kansa and turned into Devi form and informed him that “The one who will kill you is already born and safe and vanished from the prison of Mathura”.

The child, Yoga-maya-devi, the younger sister of Bhagwan Viṣhṇu, slipped upward from Kansa’s hands and appeared in the sky as Devī, the goddess Durgā, with eight arms, fully equipped with weapons.

Thereafter, she choose Vindhyachal mountains to reside, where her temple is located at present.

(One who is above the universe, one who can be understood by Vedas and one who resides in Vindhya mountains, she is Saraswathi, Brahma’s consort, mother of Vedas, who is the symbol of Maya or illusion of Vishnu and one who gives pleasure)

Vindhyavasini Mata Mandir is situated at Vindhyachal, 10 kms from Mirzapur in Uttar Pradesh. It is a famous pilgrim place. As per beliefs, Bhagwan Vishnu received the Sudrashan Chakra from Bhagwan Shiva at this place with which he sliced the dead body of Bhagwan Shiva’s consort Sati into pieces that have fallen at 51 places known as Shakti peethas. Her toe is believed to have fallen at Vindhyavasini.

The Vindhyavasini Devi is also known popularly by name of Kajala devi. Devi Kali is adorned in the form of Vindhyavasini Devi. Large number of crowds visit the temple, especially during Navaratri in Hindu months of Chaitra and Ashwin. In month of Jyeshtha, the Kajali competition, a folk genre is held here which is very popular locally. The temple is on the banks of the river Ganga.

The temple of Mahasaraswati named Ashtbhuja Temple, is located 3 km away on a hillock and a temple of Devi Kali in cave called Kali khoh temple. The pilgrims normally visit these three temples, which is a part of ritual called Trilokan Parikrama. Ashtabhuja means the one with eight arms. She is the representation of Maha Saraswati as she is defined in Devi Mahatmay with 8 arms.

Ashtabhuja is believed to be the girl who was born to Nand and Yashoda in Gokul, the one who was exchanged with Krishna. She is also known as Nanda and Yogmaya. As this region used to be a forest, Devi is also called Vanadurga.

On the Jyeshtha Krishna Shashti or the 6th of Jyeshtha month (second fortnight), Aranya Shashti is celebrated. This festival is dedicated to the forest Goddess (vanadevata) and also to Devi Sashti and Kartikeya.

How to reach Vindhyavasini-

It is 70 Kms from Varanasi, which is also the nearest airport.

Vindhyavasini has a railway station by name Vindhyachal which is just about a Km away from the temple.

By road Vindhyavasini is about 10 km from Mirzapur the district headquarters.

Vindhyavasini is located at 19 Kms southward from NH 2 in between Varanasi and Allahabad from the Aurai town or 25 Kms from Gopiganj on the same NH 2 also in southward direction.