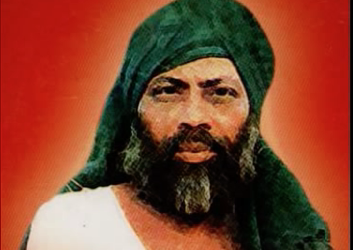 Much has been written about the process and methods of radicalization of Muslims in this age of ISIS and Al-Qaeda. Intellectuals and politicians alike are eager to lay the mistake at the door of Saudi Wahhabism, funded by oil money, radicalizing by appropriating the tools of modern technology, namely, the Internet and mobile technologies.

A rare few are aware of earlier radicalization programs that were carried out in other places and times.

Here, we attempt to bring to you the thoughts and techniques of radicalization by Palani Baba, a charismatic radical preacher, who travelled the length and breadth of Tamil Nadu in the 1980s and 1990s. He was murdered in 1997, presumably by a group of Hindu radicals.

Our attempt is made with several aims in mind

The Times and the context

In the 1980s, large parts of rural Tamil Nadu were connected with the outside world by means of roads, radio and newspapers. Television was appearing in all middle-class homes, even in small towns, and the ubiquitous public telephone – colloquially called ‘STD Booth’ – was beginning to spread even in predominantly agricultural villages.

Tamil Muslims were a small community of Sunnis south of Cuddalore, and another small community of Urdu-speaking Muslims in the North. The Nawab of Arcot was a largely ceremonial Muslim leader, being a Shiite, a sub-minority within the Tamil Muslim community. There hadn’t been any Islamic kingdom of note for 200 years. Even otherwise, large parts of Tamilnadu had been ruled by native Hindu rulers or Telugu and Marathi rulers.

Tamil Muslims over centuries had integrated into the larger Tamil community. Dress, food, marriage customs and language were very close to the large population of Hindus they were in the midst of. The charismatic leader at the time of Independence, Muhammad Ismail, known as Quaid-e-Millath, had left behind a legacy of educational institutions and a policy of co-operation with the Dravidian parties. Muslims were and still are small traders, businessmen and there was a reasonable-sized elite of professionals – notably lawyers and teachers.

By the ‘80s, many youth had begun to travel to Gulf countries for work, where they came in contact with oil wealth, the piety of the Arab elite. They became relatively more prosperous than their Hindu neighbours, so the radicalization was not fuelled by resentment over comparatively poor living conditions, as is commonly held in other instances.

The Man and his methods

In this mileu, stepped in a charismatic preacher – Palani Baba. Not much could be ascertained of his antecedents, his training and education. It is possible he did not disclose much in order to protect his family, given the dangerous nature of the tasks he was carrying out. His speeches give clues to a background as a wealthy landowner from the Western Kongu belt of TN. However, he seems to have travelled extensively in Bharat and in the Gulf. His speeches are political and are largely addressed to the momin (Muslim believer). They are a textbook lesson in demagoguery. By turns, he berates his audience, turns up their anger by showing contempt and then forgives them like a father would forgive errant children. Finally, he ends with a touching few words on their innocence.

The language is simple everyday Tamil, heavily utilizing Muslim theological terms. On occasion, he breaks into the dramatic hyperbole so beloved of Dravidian political speakers and which any Tamil political speaker must use, his audience being so used to that style

A short translation of one of his speeches follows. It has been interpolated and summarized extensively, since the original is a long, rambling monologue lasting hours.

He begins with a classification of unbelievers – mushrikeen, munafiqeen and kufr.

Iblis (Lucifer) was one of the highest of Allah’s creations, but he was cast down since he failed to accept Allah’s placing Adam above him. The only reason he fell was his challenge to Allah’s authority.

Thus, a Muslim who claims to be a Muslim, but does not follow Allah or His Messenger’s instructions is deemed to be a munafiq (hypocrite) and that makes him no better than a kaffir or infidel.

A kaffir or mushrik is as good as a Shaitan (Devil) and is condemned to eternal damnation. A munafiq deserves no better.

So, what are the things that entail nifaq (hypocrisy) among Tamil Muslims?

Target scheduled caste people in the villages that are poor. Get their daughters married to boys from well-off and respectable Muslim families, as per Muslim custom. Then set them targets for converting people in their neighbourhood

He refers to how even Jayalalitha was forced to retract the anti-conversion law. He then speaks how he and a bunch of his jihadis got orders from the Collector to provide police protection when he converted many families in a single village.

This is most probably an empty boast, as was his wont, but it is very effective in giving his audience the confidence to try something by themselves.

Seemingly rambling, he jumps to how he got boys from his group out on bail when riots broke out, legally ‘fixed’ an MLA and a couple of senior policemen.

Again, this could be exaggeration of what happened, but in an era with few TV channels and no Internet, he is very convincing, especially to people from small villages.

He has now moved from berating people on their compromises with Islam to reminding them of their duty in converting people, and helping them overcome their mental discomfort in carrying on conversion.

In Devipattanam, a Muniswaran temple had been encroached and replaced with a mosque. He mentions how he had the original land records stolen and made it impossible for the district authorities to prove original ownership.

Next, he mentions how he had consolidated jamaats and mosque administration across districts. A simple rule he gives – mobilize 500 representatives for 5 lakh Muslims in a region. Any time there is trouble, go as 500 people to the authorities.

Towards the end, he gives a rousing call to arms, including the all-too-familiar claim that 20 Muslim men are as good as 200 kaffir men. Rely on tawakkul (trust in God’s plan). Common Islamic terms of calling man-made laws and institutions ‘corrupt’ and to co-operate with authorities only as far as it does not contradict Islam.

The theology, terminology and didactic style is familiar to us, today, exposed as we are to the Islamic world, but must have profoundly affected some parts of his audience. He starts with the low-hanging fruit, social evils like dowry, but decries them not as being evil on their own, but being evil since they go against Allah’s commandments. From here to full-body burkas and towheed is a short distance.

As seen in other instances, like in Qing China, it is possible to turn a relatively well-assimilated population of Muslims radical within a short period of time. The core teachings carry seeds of this radicalization. All it needs is a charismatic few leaders

In a concluding part, we will translate another speech which is less focused on consolidated the faithful and more towards aggression against a kaffir State, which is by definition illegitimate in the eyes of Islam.