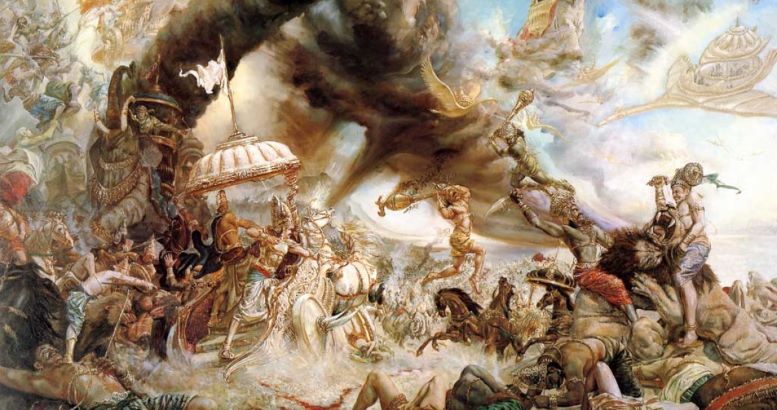 In Hindu Dharma, time is believed to be cyclical and four Yugas combine to form a Mahayuga. At the end of each Mahayuga, Bhagwan Shiva will destroy the world. Thereafter, a period of calmness or non-activity exists at the end of which Shri Brahma, seated on the lotus emerging from Sri Hari Vishnu’s navel, will commence the task of recreating the universe and all the life forms within it.

As per Hindu granthas, this is a never-ending process- destruction, protection and creation- which goes on continually. Each Yuga has a time span of its own. As per Srimad Bhagavatam Satya Yuga extends over a period of 17,28,000 years, Treta Yuga lasts for 12,96,000 years, 8,64,000 years make up Dwapar Yuga and a period of 4,32,000 years is known as Kali Yuga.

The entire four Yugas total 43,20,000 years to make up a Mahayuga and complete one cycle. Manusmriti states the duration for each Yuga as 4,800 years for Satya Yuga, Treta Yuga spreads over 3,600 years, a span of 2,400 years makes up Dwapar Yuga and Kali Yuga extends over 1,200 years.

Each Yuga has its own characteristics and people are said to behave in accordance with the same. The principal features of each Yuga vary as well. The life span of humans differs from one age to another. Kali Yuga is characterised by moral degeneracy and a period in which people will suffer from ignorance.

Values will be lost and negative traits such as treachery, dishonesty, hypocrisy and manipulation among others will be rampant. With each Yuga, human virtues keep depleting and the highest degradation takes place during Kali Yuga, at the end of which creation would be destroyed only to begin the cycle anew.

Well-known mathematician of ancient Bharat, Aryabhatta puts the date of commencement of Kali Yuga between 18 and 20 February 3102 BCE. Surya Siddhanta states that Kali Yuga began on the midnight of 18 February 3102. These dates are precise within the range of 30% of what modern scholars predict. As per Srimad Bhagavatam, Kali Yuga began when the constellation Big Dipper (Saptarishis) passed through the Magh Nakshatra.

This event took place 36 years after the Mahabharata War. One may wonder why Kali Yuga did not begin immediately after the war. Tradition has it that the demon Kali could not set foot on Bhuloka until the time Shri Krishna was present here. Therefore, he had to wait till Shri Krishna left his earthly body and returned to Vaikunta.

As per Shastras, the Bull represents Dharma. With each successive Yuga, the Bull loses one leg and at present, it is surviving on a single leg. In essence, this means Dharma is surviving on thin ice. There is very little Dharma left in Bhuloka and as the end of the Yuga draws closer, Kali will take complete hold over Dharma, thus pushing righteousness to the brink and forcing Shri Vishnu to appear on the earth and annihilate Kali.

Puranas give a clear indication of how people would behave in this Yuga. It would suffice here to say that people in general would move away from their Dharma. However, there is a mention of the golden years during Kali Yuga when saints would appear and lead people on the path of devotion.

Although various shastras give a different time span, it is important to remember that we are currently dwelling in the Kali Yuga. Vedas and Shastras recommend meditation and Bhakti as means to connect with Bhagwan and reduce the ill effects of Kali Yuga to the extent possible.