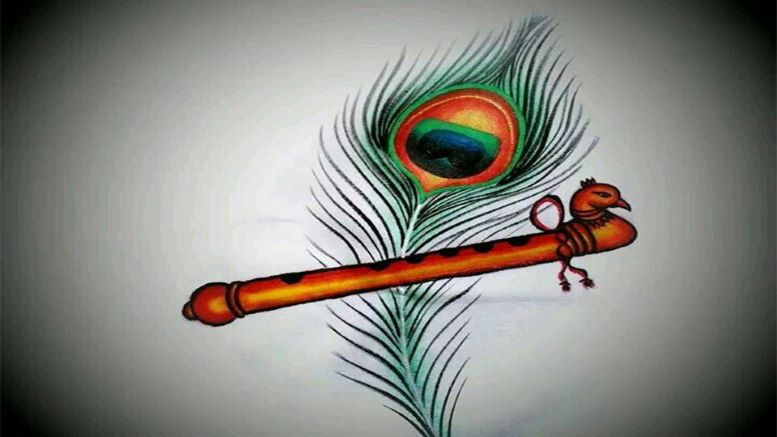 Sri Krishna was born at midnight as the eighth son of Devaki and Vasudev in the Yadu vansh (Yadu clan). His childhood was spent in Gokul under the care of Yashoda and Nandalal.

Sri Hari Vishnu manifests Himself in various forms whenever the need to protect Dharma arises. These manifestations are known as Avatars. Sri Krishna, the eighth avatar of Bhagwan Vishnu, is said to be a Poornavatar. A Poornavatar is a complete manifestation of the power and glory of Bhagwan.

“The power of God is never fully manifest anywhere in the world. It is always manifest or expressed in some percentage as the occasion demands, even as we, in our capacities, for instance, do not put forth our total energy any time of the day. We only express a little of our thought, a little fraction of our understanding and a partial form of our energy as would be necessitated by the nature of the particular context. Likewise, God never manifests Himself wholly unless the occasion is of such an intensified character as to call for such a manifestation,” says Swami Krishnananda.

The prevailing circumstances during the advent of Bhagavan Sri Krishna necessitated a complete manifestation of the Divine.

The importance of Krishna Avatar

His childhood was spent in Gokul where he enthralled the villagers with his bal-leelas (child’s play). Even as a child, His divine powers were manifest in the various leelas. The years Sri Krishna spent at Acharya Sandipani’s ashram is a lesson in Guru-Shishya parampara. The importance of Guru Dakshina comes through in the manner in which Sri Krishna and Sri Balaram bring back their Guru’s son.

The relationship of Sri Krishna with Sudama and Arjun are examples of true friendship. Thick friends standing up for each other at all times was the message sent across through these relationships.

Bhagwan was not here only to kill asuras/evil persons and play sport, He was here to show the path for the upcoming Kali Yuga. If Mahabharat is the compendium of Hindu Dharma, then the Gita is its essence. It is the epitome of Hindu philosophy and a summarized version of all the Hindu granthas put together.

Mahabharat has a great significance in Hindu society and the Gita only elevates that position several notches. However, the Bhagavad Gita is much beyond just a grantha, it is a guide to leading life. Gita is particularly useful in today’s fast-paced competitive life and is the torch that lights the path in the darkness of Kali Yug.

The most important message of Sri Krishna’s life is to always stand up for Dharma. Janmashtami is a celebration of Bhagwan Krishna’s life. It gives a message of light and positivity in dark times.

Devotees observe a fast and perform Bhagwan’s puja at midnight. The next morning Dahi handi is organized and devotees form a human pyramid to break it. The method and dates of celebration may vary according to the region and sampradaya but the essence remains the same – rejoicing Bhagwan’s birth!

In this Kali Yug, we must imbibe the valuable message given by Bhagwan through the Gita. It is also time to reclaim Sri Krishna Janmasthan at Mathura and bring Him home.

Janmashtami ki shubhkamnayein from HinduPost. May Bhagwan bless everyone with good health and prosperity!