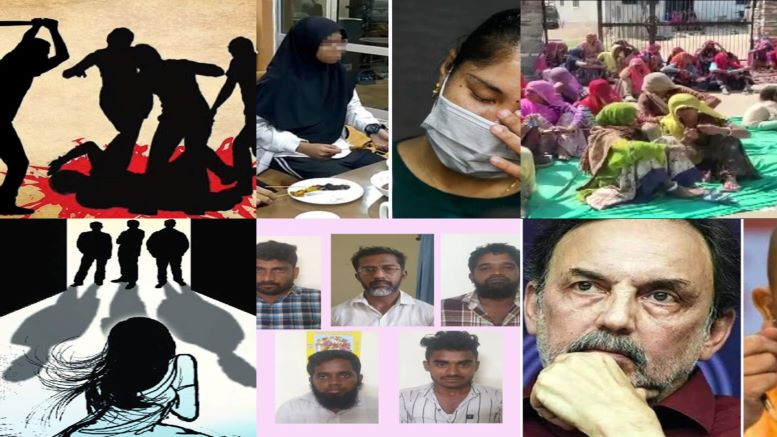 In this weekly summary for the period from 6 to 12 March 2022, we hope to provide a snapshot of such crimes and hopefully awaken more people around the world to this human rights crisis:

2) A 17-year-old Hindu girl in Tamil Nadu was groomed by a Muslim man who raped her on the pretext of marrying her. The girl was made to consume rat poison and lost her life today. The Muslim man, his mother, and associates have been arrested after the issue gained attention on social media.

3) A group of Muslims assaulted two gaurakshaks (cow protectors) in Mathura district, UP after the latter allegedly entered their locality, suspecting cow slaughter.

4) A woman teacher has been accused of distributing anti-Hindu literature in a school in Rajasthan’s Bhilwara. The incident took place at a government higher secondary school in Rooppura of Bhilwara’s Asind subdivision. The villagers protested against the teacher by locking the school and demanding her suspension. As per available information, the Education Department has served APO (Awaiting Posting Order) to the teacher identified as Nirmala Kamad.

5) Five Muslim men have been arrested in Coimbatore, Tamil Nadu for conspiring to kill a Hindu man. The intended victim is the father of a youngster who had recently married a Muslim woman. NIA which had discovered plans to buy a pistol from West Bengal had alerted TN police based on which the 5 men have been arrested.

6) A DMK functionary has reportedly attacked a temple priest in Kanyakumari Tamil Nadu. The attacker, a history-sheeter is allegedly being helped by police. The priest is undergoing treatment in the Kuzhithurai government hospital.

7) Auto-driver Mohammad Ijaz of Karnataka brutally hacked his wife Arfa Bano, nee Apoorva Puranik, 23 times with an axe/machete on Thursday for seeking a divorce after finding out that he was already married and a father of three children. The couple had a son, aged two, of their own as well. The victim is currently admitted to a hospital in Gadag, Karnataka, battling for life.

1) A Malaysian Hindu mother has gained custody of her 3 children who were converted to Islam after a harrowing legal battle. But her request to nullify the children’s conversion was turned down. The children were converted by their father without the mother’s consent. While Malaysian Hindus rejoice at the decision of the court, Islamists ‘fear’ that “hidden hands are pushing to revoke the children’s conversion”.