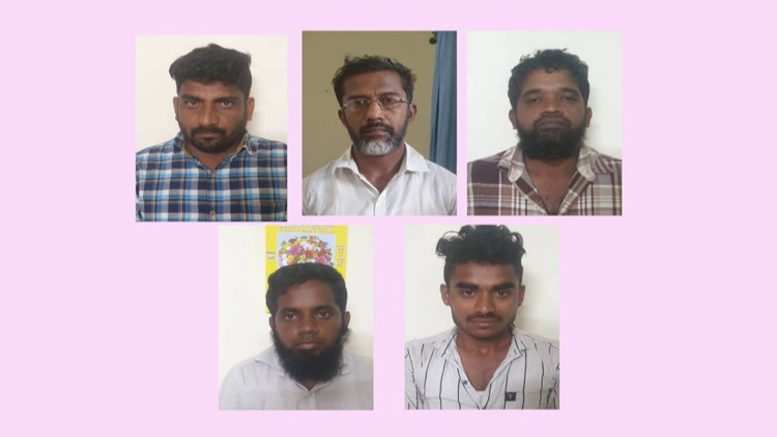 Five Muslim men have been arrested in Coimbatore, Tamil Nadu for conspiring to kill a Hindu man. The intended victim is the father of a youngster who had recently married a Muslim woman. NIA which had discovered plans to buy a pistol from West Bengal had alerted TN police based on which the 5 men have been arrested.

Arun Kumar, son of Kumaresan, had married a Muslim woman Sahana recently. The girls family reportedly asked Arun Kumar to convert to Islam. The Hindu reported that the girl’s mother has asked him to convert. However Kumaresan was critical of this demand. Enraged by this, the girl’s relatives conspired to murder Kumaresan.

One of them, Sadam Hussain(29) had been sent to murder Kumaresan using a gun. Hussain tried to flee on the sight of police alerted by which they arrested him. Upon investigation he confessed that he was sent to murder Kumaresan. Based on his confession, Bakrudeen (54), Imran Khan (39), Mohammad Ali Jinna (47) and Ramveer (20) were immediately arrested.

They have been booked under sections 153 A (1) (b) (Whoever commits any act which is prejudicial to the maintenance of harmony between different religious, racial, language or regional groups), 120 B (Punishment of criminal conspiracy) of the Indian Penal Code and section 7 (1) (a) (Whoever with intent to cause any person to abstain from doing or to do any act which such person has a right to do) of the Criminal Law Amendment Act, 1932. They were produced before the judicial magistrate and remanded in judicial custody.

Tamil media, Polimer News reported that the accused made the plans to murder him through WhatsApp and phone calls. NIA discovered their plan to buy a gun from West Bengal and alerted TN police about the same.