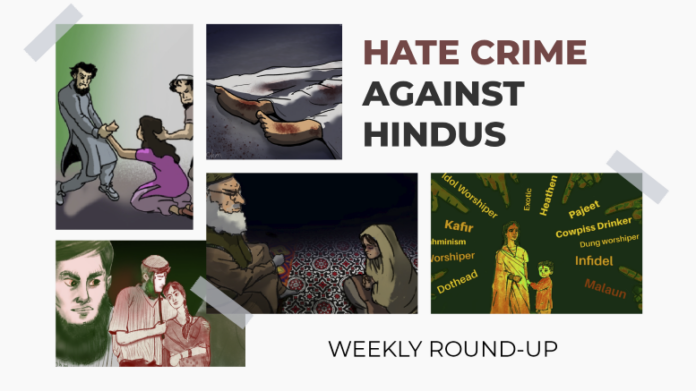 In this weekly summary for the period from 8 January to 14 January 2023, we hope to provide a snapshot of such crimes and hopefully awaken more people around the world to this human rights crisis:

1) Kerala police arrested a suspect in the murder case of a businessman in Vadakara. Mohammad Shafiq (22), a native of Vadanappally, Thrissur, was detained by a special investigation team. Vatakara is between Kannur and Kozhikode, while Vadanappally is 150 km south of Vadakara. Shafiq confessed that he killed Rajan after the latter tried to stop Shafiq from robbing his store.

2) On 31 December, elderly Padmavati (74) was found dead in her ancestral home at Kodumbu near Palakkad. Relatives discovered her jewellery missing and a wound on her neck. It came to light that Basheer murdered 74-year-old Padmavati for her gold necklace in Palakkad.

3) Yet another case of grooming jihad, rape and attempted forced conversion to Islam, by multiple members of the same Muslim family, has been reported. On December 29, UP Police arrested gym owner Intezar (30), his father Abbas Ali (52) and brother Suhail (24) for raping a woman and attempting to forcibly convert her to Islam in Noida, Gautam Buddh Nagar district.

4) Bharat Tudu (53), was beaten to death in Raghunathganj, Murshidabad district, WB, and his body were found on the side of a state highway on Saturday (January 7) morning, reports the Bangla edition of Hindustan Times. Two people have been arrested for Bharat’s murder, but their identity has not been revealed by police or the media.

5) In a shocking incident, a 32-year-old woman was allegedly raped by Mohd Shehzad in an abandoned house in Uttar Pradesh’s Shamli district, while her two minor children, aged 2 and 10, pleaded for mercy.

6) An attempt to forcefully convert a Hindu family to Islam has been reported from the Thiruvananthapuram district. Ayiroor police arrested a member of a 10-member gang for trespassing into the house of a young Hindu man who backed out of a marriage and refused to convert to Islam. The assailants attacked Nandu, his mother Shalini, and other relatives who were present in their house.

7) BJP leaders and Hindu activists have objected to the conversion of a residential house into a mosque in the Belagavi district of Karnataka.

8) A minor Hindu teen, Sambhu Koiri (16), was brutally stabbed to death in Assam on Sunday, January 8, around 8 PM by a Muslim assailant. The murder took place in Lowairpoa town in the Patharkandi subdivision of the Karimganj district.

9) Rafique Siddique was held in Lucknow for threatening to abduct and forcefully marry a minor girl and driving her to suicide.

11) Rahul Gandhi’s theatrics in the name of ‘Bharat Jodo Yatra’ continues. However, as is his wont, he ended up issuing statements that reek of Hindudvesh (Hinduphobia) as well as display his total lack of knowledge about Hindu Dharma and Dharmic Granthas.

12) On 18 December 2022, villagers of Maruvapalli village, Andhra Pradesh caught a Christian priest, red handed with young children who were lured into the church, despite several earlier warnings by the minor children’s parents and village elders, against the unsolicited invitation.

13) Cardamom used in Aravana Payasam prasadam distributed at Sabarimala is reportedly inedible. According to the report submitted by the Food Safety and Standards Authority of India (FSSAI) to the High Court, the presence of 14 deadly pesticides has been detected. It mentioned the existence of certain pesticides in cardamom that could cause serious diseases and illnesses.

17) Evangelists who tried to fool people into believing grape juice was Jesus’ blood and coerced into converting to Christianity have been booked in Maharashtra’s Pune.

18) In a shocking incident, an employee of the Andhra Pradesh government was physically attacked when he raised questions about the erection of an arch and Christian symbols by encroaching on public roads. Venugopal is a person from the Scheduled Caste Mala community and works as a junior assistant at the Mandal Revenue Office in Kadapa District.

Attacks on Hindus in Bangladesh are relentless and designed to cleanse the religious minority from the country gradually. According to a study by Prof. Abul Barakat of Dhaka University, no Hindus will be left in Bangladesh by 2050 due to systemic and institutionalized persecution. Temple desecration, land grabbing, mob attacks after false blasphemy charges, rape/forced conversion of women, and hate speech are tools used to intimidate and drive Hindus out.

2) Another incident of Islamic jihadists attacking the minority Hindus of Bangladesh was reported on January 11. Hundreds of radical Muslim fundamentalists arrived with sharp weapons and vandalized Hindu homes and allegedly hacked several residents with sharp weapons. The incident took place at Gorta village under the Bhavanipur union of Sherpur upazila of Bogra district.

1) BAPS Hindu mandir was desecrated by Khalistani extremists. The walls of BAPS Swaminarayan Mandir in Melbourne’s northern suburb of Mill Park were defaced with anti-Bharat and pro-Khalistan slogans.

Most hate crimes are driven by anti-Hindu bigotry encoded in certain religious teachings and political ideologies. While the anti-Hindu hate in Islamic countries is evident, there is another subtler form of anti-Hindu sentiment within institutions and the public sphere of ostensibly secular states (like India) that provides an enabling environment for Hinduphobia and hate crimes. This subtle, everyday discrimination can be missed unless one studies prevailing laws and patterns. The gradual ban on firecrackers during Diwali is a good example – it might seem pollution-related on the surface. Still, the double standards at play become apparent when one looks at the larger picture of restrictions on Hindu festivals and the lack of sound reasoning behind the ban.