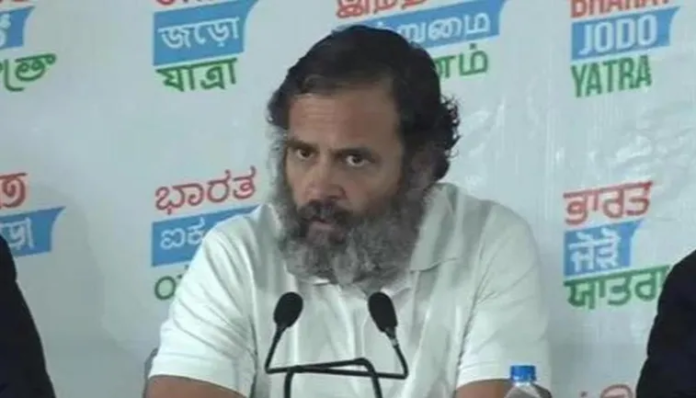 Rahul Gandhi’s theatrics in the name of ‘Bharat Jodo Yatra’ continues. However, as is his wont, he ended up issuing statements that reek of Hindudvesh (Hinduphobia) as well as display his total lack of knowledge about Hindu Dharma and Hindu Dharmic Granthas. Besides Gandhi’s Hinduphobic agenda, his Yatra is setting a narrative that no self-respecting society would accept in connection to its Dharma.

The problem with the likes of Gandhi, who is an electoral/seasonal Hindu (one who becomes Hindu only during election times), is they know nothing about Hindu Dharma. Congress in their hurry to milk Hindu sentiments, made a young boy walk without a shirt in the winter cold.

For all their claims of the Congress leader being a ‘janeudhari Brahmin’, the child was made to wear the janeu the wrong way. This takes us back to Veer Savarkar’s prophetic words, “The day Hindus unite, Congress leaders will wear janeu over the coat”. Furthermore, Congress workers repeatedly keep propagated that Gandhi is a ‘Tapasvi’ by showing his pictures in a T-Shirt despite the winter coldness.

While the workers call their leader a ‘Tapasvi’, the leader goes on to make senseless statements displaying his utter lack of knowledge about Hindu Dharma. On the one hand, Congress was attempting to project a Brahmin-friendly and pro-Hindu image and on the other, Gandhi insulted Brahmins by saying that Bharat is a land of Tapasvis and not Pujaris.

Of course, it is too much to expect him to know the importance and place of Tapasvis and Pujaris in Hindu Dharma. Pujaris from across Bharat condemned his statement and held protests. The Pujaris opined that Gandhi’s statement hurt the sentiments of the community.

“India is a land of Brahmins. Without Brahmins, no auspicious work can be completed. Just like you can’t enter the cinema hall without a gatekeeper, similarly, no puja is complete without brahmins. The comments made against the Brahmins are totally wrong”, stated Ujjwal Pandit from Haridwar. Another priest from Yamunotri Dham Rawal Aurudh Aniyal opined, “The manner in which Congress Leader Rahul Gandhi has insulted the Priests and has said that India is not a country of Brahmins is highly condemnable. He has insulted the customs, culture, and devotees of the country. Such people should leave India”.

Badrinath Dham pujari Bhaskar Dimri, Gangotri Dham’s Rajnikant Semwal, and Senior purohit Acharya Santosh Trivedi were among those who condemned the Congress leader. Do Congress strategists have the intellectual capacity to understand what Tapasya and Tapasvi are? Those who believe that only a ‘Tapasvi’ can roam around in a T-shirt bearing the winter cold, would never be able to understand the role and importance of Pujaris in Hindu Dharma.

Pujaris are among those who have been preserving much of the Dharmic traditions and handing them down to future generations. By his stance against Pujaris, isn’t Gandhi supporting the lynchers and murderers of the Palghar Sadhus?

Congress strategists would do well to know that their attempts to project Gandhi as a ‘Tapasvi’ and compete with the BJP using ‘soft Hindutva’ have ended up insulting the concept of Tapasvi and Dharma itself. These strategists must also understand their leader has no knowledge of Hindu Dharma as is evident from his repeated faux pas.

It is expected of Gandhi to make such senseless statements because as mentioned earlier, it is clear that he has no knowledge of Hindu Granthas. Arjun participated in Draupadi’s Swayamwar and obviously would wed her. A Swayamwar is never conducted without any objective and its objective is announced at the start.

Even more appalling was his statement about Pandavas. He said Pandavas had supporters from all religions. “On one hand there were these five Tapasvis and on the other hand, there was a crowded organisation. With the Pandavas, there were people of all religions. Like this (Bharat Jodo) Yatra, nobody asks anyone from where he comes. It is a shop of love. The Pandavas had also stood against injustice, they too had opened a shop of love in the market of hate,” Gandhi said at a public rally in Kurukshetra. His statement makes one wonder which other religion was there during the times of the Pandavas.

Who gives Hinduphobic leaders like Gandhi the right to distort Hindu Dharma and Granthas? Why should his balderdash be tolerated by the so-called majority of this country? Gandhi’s speeches are as directionless as his Bharat Jodo (Todo) Yatra. Those who are joining his Yatra have been associated with anti-national and Hinduphobic ideologies.

Why is every concept of Hindu Dharma being distorted to create an image of Gandhi as a ‘Tapasvi’? Will Hindu Dharmic Granthas and concepts like Tapa be distorted and interpreted as desired only because Congress wants to project him as a ‘Tapasvi’? Politics and political opposition are very common in a democracy, but what is most important is whether politics means attacking religious concepts.

For political gains, the traditions and concepts that have been practised for centuries are being twisted according to the whims and fancies of Congress and its leaders. In order to show himself as more Hindu than Bharatiya Janata Party and Prime Minister Shri Narendra Modi, Gandhi is making such interpretations, which is neither appropriate for any party nor the Hindu Dharma.

It is high time to put a stop to these distortions of Dharma for politics because it not only causes conceptual harm to Dharma but also creates mutual enmity and disparities in society!