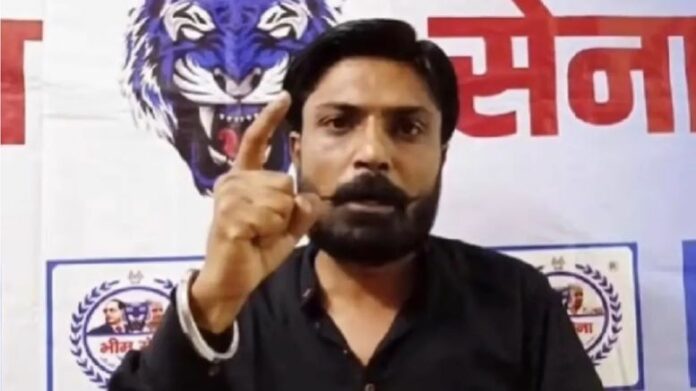 Journalist and Radio Jockey Richa Anirudh has accused a woman from an SC/ST community of filing a fake rape case (Tweet archived here) against a general category Hindu (so-called ‘upper caste’) man currently in jail. The woman has also reportedly demanded INR 30 lakhs to withdraw the false case, of which over half will go to controversial socio-political outfit Bhim Sena.

The man’s family claims they have audio and video evidence to prove that a false case has been hoisted on him to extort money. They have recorded a video of the woman demanding money and despite the evidence, police haven’t released the man. Since she is from the reserved category and Bhim Sena is involved in the case, the chances of misusing the SC-ST Atrocity Act are extremely high.

Though at this point in time, no information is available indicating the booking of the man under the Atrocity Act, precedence suggests that Atrocity Act has repeatedly been misused to extract money and/or revenge. Bhim Sena Chief Nawab Satpal Tanwar was arrested for threatening and issuing a bounty to ‘cut off’ former BJP spokesperson Nupur Sharma’s tongue.

“There are two organizations named Bhim Sena (Akhil Bhartiya Bhim Sena or ABBS) and Bhim Army (Bhim Army Bharat Ekta Mission). The former was founded by Nawab Satpal Tanwar in October 2010 in Gurugram, Haryana. The latter was founded by Chandrashekhar Azad Ravan in 2015 in Uttar Pradesh. Incidentally, two Twitter accounts linked with the Bhim Army have also been named in the same case of spreading information about the Unnao murder case”, highlights OpIndia.

Incidentally, all these Bhim Sena/Army type of outfits have a soft corner for Islamism – Nawab Satpal Tanwar had demanded that Nupur Sharma be hanged after she was wrongly accused of ‘blasphemy’ by Md. Zubair, an Islamist propagandist masquerading as a ‘fact-checker’. Chandrashekhar Azad Ravan had also backed the violent anti-CAA protests launched by Islamists.

Previous instances of misuse of laws

Misuse of laws has become easier for women as many fake rapes and domestic violence cases have come to the fore. As a result, genuine victims have to suffer. In October 2021, it was reported that a Gurugram woman filed 7 rape cases against 7 different men in 1 year with at least 2 cases proven to be false.

In March 2021, the High court at Prayagraj ordered the immediate release of Vishnu Tiwari who had been serving life imprisonment in jail under the Atrocity Act despite being innocent. It is, however, a bigger travesty of justice that Tiwari had been serving sentence even though charges against him hadn’t been proved. The high court termed this as grave injustice while making observations against the order of the lower court.

Vishnu Tiwari was only 16 years when he was accused of having raped a scheduled caste woman on her way to the fields at 2 in the afternoon on 16 September 2000. During the course of court proceedings, the lower court held Tiwari guilty and charged him with rape for which he was given a 10-year jail term under IPC Section 376 by Lalitpur District Court in addition to life imprisonment under SC ST Atrocity Act.

HinduPost has reported numerous instances of the Act being misused, the most recent one being the suicide of a 25-year-old CA in Rajasthan’s Jaipur after his mother was trapped in a false case under the Atrocity Act.

Rajasthan has witnessed several such incidents in recent times where young lives were lost due to false cases. A similar incident was reported from Churu where a young businessman died after jumping in front of a train at the end of July. He was pushed to take the extreme step as a woman and her four friends had threatened to file false cases of rape and the SC-ST Atrocity Act.

The 26-year-old jeweller, identified as Uttam Soni Kudel, had posted his suicide note on Facebook (FB) blaming a businessman and a woman for his death. The note also pointed out the two had been threatening him with false cases and hence he paid them 70,000 rupees to save his reputation. The duo started demanding more money.

A standard 12 student in Uttar Pradesh’s (UP) Kannauj Abhinav Pratap committed suicide in jail after an SC woman got him arrested under the Atrocity Act. According to media reports, Abhinav was the only son and his father has alleged that the woman filed the case due to personal enmity.

Even the Prayagraj (Allahabad) High Court highlighted the misuse of the Atrocity Act in a recent order in which it directed the CBI (Central Bureau of Investigation) to investigate gangs that were registering cases under the Act to extract money. “The court was told that several ‘gangs’ run by women at the behest of advocates and other high-profile persons would trap innocent persons in fake cases and then extract money after a charge sheet was filed”, reported The Economic Times.

This indicates there is a well-planned conspiracy to extort money through false cases. The victims are trapped by filing cases under SC-ST Act and later money is extorted from them in the name of compensation. Several cases of misuse of the Act have come to the fore from Rajasthan.

Orders were passed to take strict action against those who misuse the law. According to media reports, ADG (Crime) Dr Ravi Prakash Meherda confirmed that 50 per cent of the SC cases and 53 per cent of the ST cases filed in 2021 under the Act turned out to be false.

Recently, the Prayagraj HC fined a woman for filing a false case under the Atrocity Act stating that such cases only added to the burden of the courts. It also highlighted that the court’s precious time was wasted as a result of which it was unable to conduct hearings on important matters.

It is a matter of great misfortune that a one-sided narrative is peddled by the media in favour of the so-called backward classes. However, neither the media nor political parties care for the plight of those belonging to the general category who are repeatedly victimized using false cases. If all are equal before the law then why are victims like Rakshit, Uttam, and Vishnu Tiwari among others denied justice? Isn’t it time to review the Act and ensure strict punishment for those misusing it?

This case also indicates how neo-Ambedkarite and neo-Buddhist organizations simply leverage ‘caste’ for their own gains besides promoting Hinduphobia. These organizations have become terror mafia of sorts that divide society.

K’taka: Hindu boy & Muslim girl killed by girl’s family for seeing each other