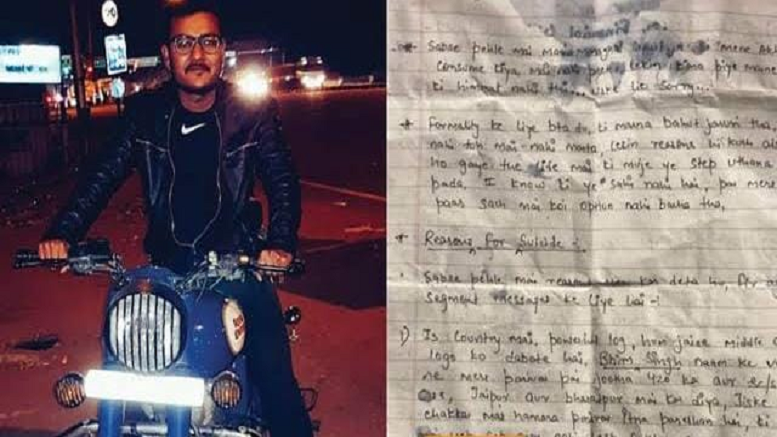 A young CA lost his life due to misuse of the SC-ST Atrocity Act in Rajasthan’s Jaipur. The 25-year-old, identified as Rakshit, left a four-page long suicide note before jumping to death from his fourth-floor balcony. The case once again highlights how the act is being misused.

Rakshit Khandelwal alias Kanha resided in Abarna Jewelers Apartment with his father Ramakant, mother Anju, and brother Aryan. His father ran a clothes showroom that ran into losses due to the pandemic. After his father’s business was shut down, the onus to run the family fell on Rakshit.

The young man was going through a difficult time as a person named Bhim Singh had filed a false case against his mother under the SC-ST Atrocity Act. He was emotionally attached to his mother and hence, was bothered by his mother’s plight. He was disturbed to the extent of committing suicide.

“In this world, powerful people suppress middle-class people like us. A person named Bhim Singh has filed a false case of 420 against my family. He registered a case in Jaipur and Bharatpur. I cannot see my family in such a worried state We are not criminals”, says his suicide note. He further writes that Singh is being supported by Bharatpur DCP Satish Verma. His letter notes the police have been harassing them by sending teams repeatedly.

Rakshit’s letter also says that their family is being treated like criminals and although they didn’t say anything to anyone, a case was filed under the SC-ST Act against them in Bharatpur’s Sawar police station. He sought protection for his family.

This is not the lone case where casteism has been used for targeted harassment. Recently, a teacher was accused of causing the death of an SC child as the student ‘touched’ a water pot. Organizations like the Bhim Army politicized the issue as they often do.

Rajasthan has witnessed several such incidents in recent times where young lives were lost due to false cases. A similar incident was reported from Churu where a young businessman died after jumping in front of a train at the end of July. He was pushed to take the extreme step as a woman and her four friends had threatened to file false cases of rape and the SC-ST AtrocityAct.

The 26-year-old jeweller, identified as Uttam Soni Kudel, had posted his suicide note on Facebook (FB) blaming a businessman and a woman for his death. The note also pointed out the two had been threatening him with false cases and hence he paid them 70,000 rupees to save his reputation. The duo started demanding more money.

The woman had pledged her jewellery to take a loan from Uttam. But when she couldn’t repay the loan, the jewellery was used by Uttam. When the woman said she would bring the police, Uttam offered to make new jewellery for her. Following this, the woman and her friend Ram Swarup Khatik began blackmailing Uttam. Uttam went into depression due to the constant harassment and committed suicide. The main accused in the case has been arrested.

A standard 12 student in Uttar Pradesh’s (UP) Kannauj Abhinav Pratap committed suicide in jail after an SC woman got him arrested under the Atrocity Act. According to media reports, Abhinav was the only son and his father has alleged that the woman filed the case due to personal enmity. He was arrested on 24 March, the day of his first exam paper. A magisterial enquiry was ordered into the case.

A recent order by the Prayagraj HC highlights the misuse of the Atrocity Act. The HC (high court) has called for a CBI probe into gangs that file cases for extorting money.

A report by The Economic Times on the matter notes:

The Allahabad High Court has ordered a CBI investigation into a clutch of alleged “fake” cases filed against many, including advocates of the high court and district court, to extract money from them.

The court was told that several “gangs” run by women at the behest of advocates and other high-profile persons would trap innocent persons in fake cases and then extract money after a charge sheet was filed.

The order came in the course of hearing an application under section 482 CrPC seeking expeditious disposal of trial against the accused (an advocate) booked for charges of rape, criminal intimidation and under the SC/ST Act. When the case was taken up on July 21, the court was told members of the gang would trap innocent persons in SC/ST Act, and after receiving money from the government, distribute it among themselves.

This indicates there is a well-planned conspiracy to extort money through false cases. The victims are trapped by filing cases under SC-ST Act and later money is extorted from them in the name of compensation. Several cases of misuse of the Act have come to the fore from Rajasthan.

Orders were passed to take strict action against those who misuse the law. According to media reports, ADG (Crime) Dr Ravi Prakash Meherda confirmed that 50 per cent of the SC cases and 53 per cent of the ST cases filed in 2021 under the Act turned out to be false.

It is a matter of great misfortune that a one-sided narrative is peddled by the media in favour of the so-called backward classes. However, neither the media nor political parties care for the plight of those belonging to the general category who are repeatedly victimized using false cases. If all are equal before the law then why are victims like Rakshit, Uttam, and Vishnu Tiwari among others denied justice? Isn’t it time to review the Act and ensure strict punishment for those misusing it?