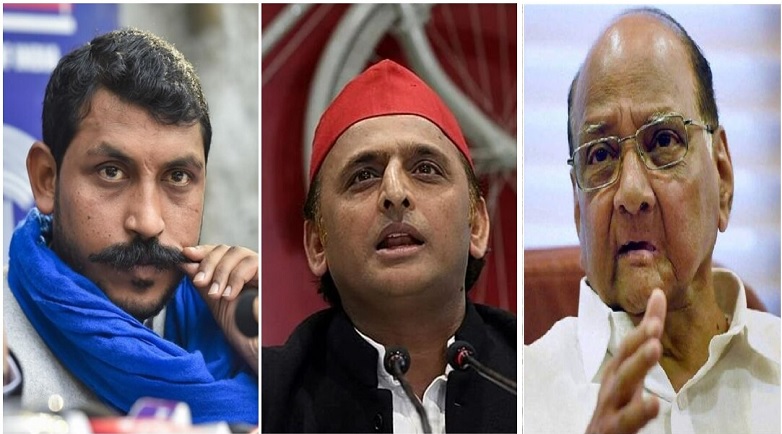 Hindu hate has become a regular feature of today’s ‘progressive secular’ politics. Every so-called secular politician never misses an opportunity to insult and hurt the sentiments of Hindus. No matter what the issue, these politicians always bring in their Hindudvesh (Hindumisia).

Tanwar earlier said that he would make Nupur do mujra in front of him. The Delhi Police took cognizance of the video and arrested him. The Cyber Cell police said that they have booked Tanwar under sections 506 (criminal intimidation), 509 (insult modesty of a woman), and 153A (promoting enmity between different groups) of the IPC (Indian Penal Code).

Ever since the discovery of the Shivling at the Gyanvapi mosque, the cabal has gone all out to target Hindus and Hindu Dharma at any available opportunity. They have left no stone unturned to insult Bhagwan Shiva. SP’s (Samajwadi Party) Bihari Lal Yadav termed Shivling ‘Patthar’ (stone) and stood by his insulting comments in his interaction with Times Now. “The piece of stone that has been spotted in Gyanvapi mosque…how is it being considered a Shivling? I am unable to figure that out. Was Lord Shiva human or stone? Aadmi the ya Patthar the?”, the channel quotes Yadav as saying. He even refused to apologize for his insensitive remarks.

TMC MP Mahua Moitra also took a sly dig. She compared the atomic center with the Hindu holy symbol because of its structure. Some users rightly pointed out that she could make this distasteful mockery only because it was about a Hindu deity. Another party that calls itself ‘secular’ is the NCP (Nationalist Congress Party) which is part of the ruling Maha Vikas Aghadi (MVA) government in Maharastra. However, its secularism is all about Muslim appeasement.

NCP (Nationalist Congress Party), part of the ruling MVA (Maha Vikas Aghadi), came out aggressively against Nupur at a rally in Mumbra. Housing, Minority, and Wakf Minister Jitendra Awhad was joined by NCP Mumbai Chief Anand Paranjape. Nothing better is expected of a party like NCP whose supremo often insults Hindu deities. “We are the father of your Gods and you bast*rds don’t allow us to enter the temples?” Sharad Pawar said recently conveniently using a poem as an excuse.

RJD’s Prashant Kanojia has been endorsing and supporting hate monger Mohammad Zubair whose fake edited clip triggered the barrage of death & rape threats to Nupur and her family. Parties like the RJD (Rashtriya Janta Dal) never miss an opportunity to denigrate Hindu Dharma and Hindus in the name of ‘secularism’.

These so-called seculars always rush to defend Islamists calling for the beheading of Hindus. Even when the same Islamists were mocking Bhagwan Shiva following the discovery of Shivling the seculars had sided with the Islamists. Essentially, the Islamists get a free pass from the ‘secularists’ who share the former’s hatred for Hindu Dharma. The so-called secularism of these parties is merely a mask to hide their Hindudvesh (Hindumisia).

In December last year, HAM leader and Bihar’s former Chief Minister Jitan Ram Manjhi while addressing the people of the Mushar community (considered ‘Maha Dalits’) during an event in Patna on December 19, started by degrading Hindu Dharma. He said, “In 1956, Dr. Ambedkar had converted to Buddhism, he died a Buddhist..he had said that Hindu Dharma is such a bad religion.”

Manjhi added that when he was young, the prevalence of Satyanaraya Puja (a puja for Bhagwan Vishnu) was not much in their community, but now that had changed to his dismay. He went on to further desecrate Dharma and hurt millions of Hindus by stating that Sri Ram is a ‘fictional character’ and not Bhagwan.

These political parties also turn a blind eye to the evil of Christian proselytization. Their sole aim is to promote casteism and a feeling of ‘exclusivity’ among their votebanks. This ‘exclusivity’ is what Dravidianists attempt to use to keep themselves in power.

No society is perfect, and Hindus don’t claim to be so. If there are traditions within certain Hindu communities that need to be reformed, our society is well capable of doing that. And let us not forget that feudal attitudes (aka casteism) or outdated practises exist even among so-called OBC or ‘Dalit’ communities, and definitely among the Abrahamics. However, to degrade our entire Dharma and to hold all Hindus responsible for the failings of a few, just betrays the Hindumisia such politicians are afflicted with.

The comments of these so-called secular politicians are in keeping with their narrow, selfish outlook. These politicians, wearing the cloak of progressiveness, prefer co-opting with Islamists and Evangelists for their political agenda and to enjoy the perks of power.