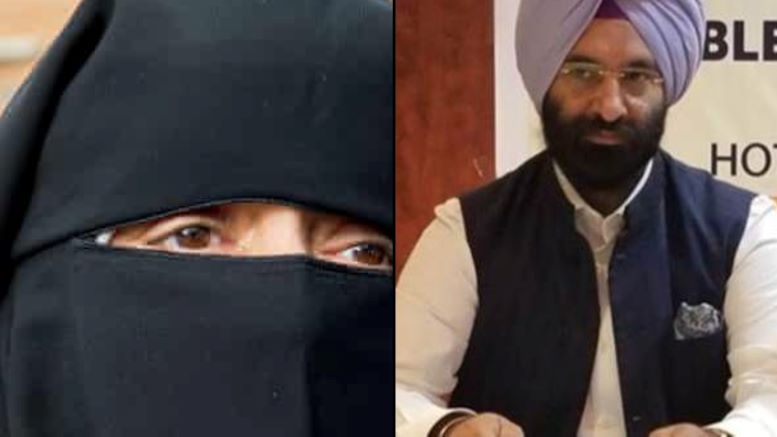 The abduction and forced conversion of two Sikh girls reported from Jammu & Kashmir (J&K) has sent shock waves across the country with the Sikh community led by Delhi Sikh Gurdwara Management Committee (DSGMC) President Manjinder Singh Sirsa, who is also a member of the Shiromani Akali Dal (SAD), has been protesting in J&K. The Shiromani Gurdwara Parbandhak Committee (SGPC) has joined the DSGMC in calling for the intervention of J&K Lieutenant Governor (LG) in the matter.

One of the cases pertains to a girl from Srinagar’s Mehjoor Nagar, the second instance came to the fore on 26 June when a Sikh girl from Budgam district who had been lured and forcefully converted to Islam was handed over to the Muslim man by the court. The Mehjoor Nagar girl was attending her Muslim friend’s wedding where she was married off to a boy attending the function and is reportedly still missing.

Budgam’s Gurudwara Parbandhak Committee President Sardar Santpal Singh said that the minor girl who is mentally unstable was lured by a Muslim man, said to be in his 40s, under the pretext of love and marriage only to convert her.

Singh said “A girl from Sikh community has been forcefully converted to Islam. She is not mentally stable. The man lured her on the pretext of love. It is not a love affair but a clear case of Love Jihad. The government is acting negatively against us.”

He also said that even though the Superintendent of Police (SP) had assured them in writing that the girl would be handed over to her family members, the court orders favored the Muslim man instead. Singh also alleged that the Sikh family wasn’t allowed to enter the court citing Covid restrictions. However, the entire Muslim family was permitted inside the court.

During the hearing, the Sikh family was sitting outside the court while the judge recorded the girl’s statement. Singh further said that none of the girl’s relatives were called in court during the course of the proceedings. Singh contended that the girl should be allowed to return to her family at least for a week after which she can return to the Muslim man if she wants to. No one would have objected if the girl wanted to voluntarily go back to the Muslim family.

Another Sikh protestor questioned the functioning of the court and why wasn’t the girl’s family heard before passing the judgment. He further added, “why was the judgment passed in a day”. He called for the intervention of the central government. He also pointed out that the girl who was kidnapped four days ago was recovered from Chandoosa and kept it remand for 2 days before being presented in the court on Saturday.

While one Sikh man asked why the judge didn’t even inquire about the girl’s parents, another wanted a law against forceful conversions on the lines of the one passed by CM Adityanath’s UP Government to be passed in J&K as well. The Sikh community has called for an investigation in the case.

CNN 18 reporter Tejinder Singh Sodhi also put forward the allegation that the Kashmiri Sikh population was being treated as second-class citizens and there had been no improvement in their condition over the last 7 decades. He also questioned the lack of support from the Muslim majority members even though Sikhs had always stood up to protect their daughters.

Sikh community in Kashmir is treated as second class citizens, nothing has changed for the community in the past 70 years. Why not a single person from the majority community is standing with Sikhs right now when the same Sikhs have always stood to protect their daughters. https://t.co/8LkszEQAd2

The SGPC also took to Twitter to demand justice and said “It is reported #Sikh Sangat is protesting at Srinagar Judicial Complex allegedly for ‘biased’ decision related to a case of ‘forced conversion’ of a Sikh girl who is reported to be mentally unstable. We urge the LG & JK police to ensure the safety of Sikhs in J&K.”

It is reported #Sikh Sangat is protesting at Srinagar Judicial Complex allegedly for 'biased' decision related to a case of 'forced conversion' of a Sikh girl who is reported to be mentally unstable. We urge @OfficeOfLGJandK @JmuKmrPolice to ensure safety of Sikhs in J&K. pic.twitter.com/oilidbun9z

J&K’s United Sikh Forum also put out a series of videos showing several members of the Sikh community protesting in the premises of the court.

In one of the videos, the SP can be seen asking the protestors to leave the court premises while assuring them that the girl would be handed over to the Sikh family.

In the meanwhile, DSGMC President Sirsa put out a series of tweets requesting the LG to look into the matter. His tweet reads “Urging J&K LG to address this issue of Srinagar. A Sikh girl (mentally disturbed) has been given to the family of a Muslim guy by the Court. The family of the girl wasn’t even allowed to attend the Court’s proceedings while the boy’s whole family was inside the Court.”

Urging @OfficeOfLGJandK to address this issue of Srinagar

A Sikh girl (mentally disturbed) has been given to the family of a Muslim guy by the Court
The family of the girl wasn’t even allowed to attend the court’s proceedings while the boys whole family was inside the court. 1/2 pic.twitter.com/1018MZFPon

He also alleged that the Sikh minorities were being discriminated against and went on to add that this wasn’t a lone instance of Sikh girls being trapped in the name of love for conversion nikah. He said that the girl should be afforded the freedom to make her own choice and that her family should be given her custody for a week as requested by them.

It is pertinent to note that Sirsa and SGPC who are now asking for Muslims to socially boycott the men involved in grooming the Sikh girl and are raising slogans against love jihad and forceful conversions are the same who had earlier mocked Hindus and Hindu Dharma.

Manjinder Singh Sirsa is asking maulanas to "tell their children" not to target Sikh women. He is also asking the Muslim community to "boycott" the perpetrators
If a Hindu leader said this, left-liberals would call it blatant communalisation of an interfaith relationship pic.twitter.com/gLPoFsZBPK

Sirsa who can be seen asking maulanas to tell their children not to target Sikh women had questioned Hindus earlier “Is Hindu Dharma so weak that it gets affected by the conversion of one girl”? while raising questions of the need for an anti-conversion law in UP. The double-speak and hypocrisy are hard to miss.

Sirsa who has now asked that anti-conversion law be passed in J&K on the lines of those in force in Madhya Pradesh (MP) and UP had previously said that if such a law is needed then it indicates that the religion is weak and flawed.

“We will not tolerate forced Nikah and conversions of Sikh daughters living in Kashmir who are forced to marry elderly of different religion Sikhs living in J&K urge @AmitShah for a law that mandates permission of Parents in inter-religion marriages,” he tweeted.

SAD was also one of the parties opposing the CAA that was aimed at providing Bharatiya citizenship to persecuted minorities of Pakistan, Afghanistan, and Bangladesh. These incidents have certainly brought the Sikh-Muslim unity project under a cloud. However, it is hard to deny the fact that the Islamic conversion mafia is actively using promises of love and marriage to trap non-Muslim girls.

There is a concerted effort to lure Hindu girls and the latest instance was reported from MP’s Satna district. Grooming jihadists often resort to hiding their Muslim identity so as to win the confidence of the girl. There have been many instances when the groomers have assumed Hindu identity to mislead their victims. Even minors haven’t been spared by the conversion mafia, in fact, they are especially targeted as it is easier to lure them.