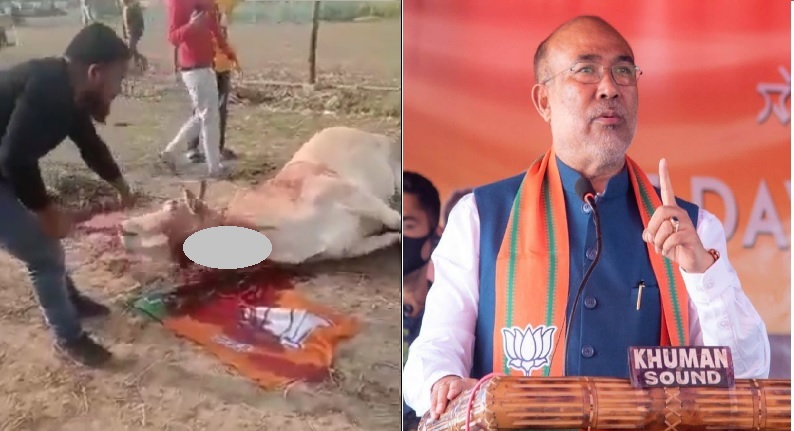 Three Muslim men – Abdul Rashid, Nazbul Hussain and Mohammad Arif Khan – have been arrested in Manipur for slaughtering a cow on the BJP flag. They have been booked under various sections of the Prevention of Cruelty to Animals Act, 1960.

It is being reported that the cow was slaughtered on a BJP flag to ‘protest’ a particular candidate being denied a BJP ticket for the upcoming Manipur assembly elections.

The video of the gruesome slaughtering makes for distressing viewing. It shows a the cow with its neck half-slit in halal fashion being pulled by the mouth so that it bleeds all over the BJP flag kept on the ground. The poor bovine’s feet are tied together and it can be seen struggling in sheer agony, while the 8-10 barbarians surrounding it are heard abusing Manipur CM N Biren Singh and BJP Manipur President, Adhikarimayum Sarda Devi. A group of onlookers, including children, can also been seen in the background.

It must be noted that cow slaughter is a grey area in Manipur. In 1939, Manipur’s Maharaja Churachand Singh had declared a ban on cow slaughtering and beef consumption through the Durbar Resolution, but this was never strictly enforced. Today, beef is openly consumed in the state and CM Biren Singh stated in 2018 that the state has no plan to ban cow slaughter. But this gory, painful slaughter of a helpless cow just to make a political point would have shaken beef-eaters too.

Muslims constitute 8.4% of Manipur’s population as per 2011 census.

This is not the first time that Islamists have brutally slaughtered a cow to send a ‘political message’. In 2017, Kerala Youth Congress leader Rijil Makkutty decided to protest the centre’s decision to ban trade of cattle for slaughter at animal markets, by brutally slaughtering a calf pinned to the floor of a small truck amid chants of ‘Youth Congress Zindabad’.

The reality is that such gory, public slaughtering of cows is a hate crime designed to hurt Hindu sentiments and intimidate the ‘majority’. Public slaughtering of cows was also carried out in the Kashmir valley by Islamic radicals like Asiya Andrabi. Such acts happened in late 1980s as well in Kashmir, just before insurgency and the forced exodus of Hindus, as a ‘mark of protest’ against the Bharatiya state.