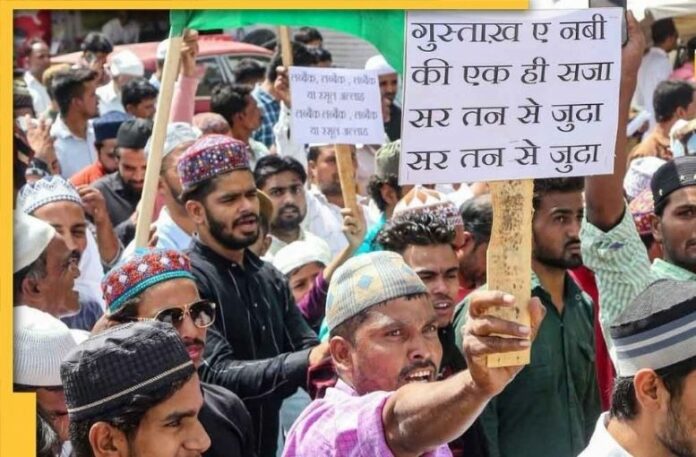 Islamists raised the ‘sar tan se juda’ slogan (call for beheading those who allegedly disrespect Muhammad) during the Eid-e-Milad-un-Nabi processions to ‘celebrate’ the birth of Islam’s founder.

Two minors were among seven who were detained on Monday in UP’s Amethi for raising the Islamist chant during the Barawafat procession. A case has been filed by the police against 19 persons including 10 unknown persons. Amethi Police said a case against nine named and other unnamed accused in this case. Further investigation is underway and action will be taken based on technical evidence.

Besides Somnath and Amethi, several other places across the country witnessed similar scenes and slogans being chanted by Islamists. Videos recorded during Eid-e-Milad across Bharat were shared on social media.

Dainik Bhaskar journalist Sachin Gupta shared a video from UP’s Azamgarh showing an Islamist mob raising the slogan. The police have registered an FIR against the accused and said that those involved would be tried as communal goons. They also confirmed that three persons have been taken into custody in connection with this case. UP Tak shared a video from the state’s Mirzapur showing slogans being raised in the presence of police. The police have arrested six persons thus far and have initiated a further probe into the matter.

Islamists calling for beheadings during the Eid procession on October 9 were reported from Pipar town in Rajasthan’s Jodhpur district. The police arrested Roshan Ali who is said to be a history sheeter involved in communal violence in the past. Notably, Pipar town is considered communally sensitive.

Maharashtra’s Amravati, where medical professional Umesh Kolhe was brutally murdered by Islamists for supporting Nupur Sharma, also reported the chant being raised as part of the Eid procession. Provocative songs were also played along with ‘sar tan se juda’ on DJ.

An FIR was lodged against 9-10 persons in the matter and further investigations are ongoing. The provocative Islamist slogan being chanted at the Eid procession was also reported from Maharashtra’s Khandwa where Hindu organizations submitted a memorandum to the Superintendent of Police (SP) seeking action. A video from Dhule was shared by Advocate Rohit Chandode who demanded action against the Islamists.

Hindus have borne the brunt of Islamist aggression manifested as beheading threats. Mahashay Rajpal was murdered on April 6, 1929, for publishing a book titled Rangeela Rasool, a biography of Muhammad, written by Pandit Champuti Lal. Kamlesh Tiwari was brutally slayed in his own home by two Islamic terrorists on October 18, 2019.

In January this year, Hindu youth Kishan Bharwad was shot dead for allegedly sharing a video claiming Bhagwan Krishna is greater than Allah. 26-year-old Harsha was hacked to death by Islamists in Karnataka’s Shivamogga for supporting uniform dress code in classrooms.

As Kanhaiyalal was taking their measurement, they suddenly attacked him with sharp weapons, stabbing and ultimately slitting his throat. Praveen Nettaru (31) was murdered in Dakshin Kannada in July this year as he spoke in support of Kanhaiyalal Teli. A minor girl from Mumbai also received a death threat for opposing Kanhaiyalal’s beheading.

Hindu society should not ignore these instances of Islamist aggression and provocative Islamist slogan-raising.