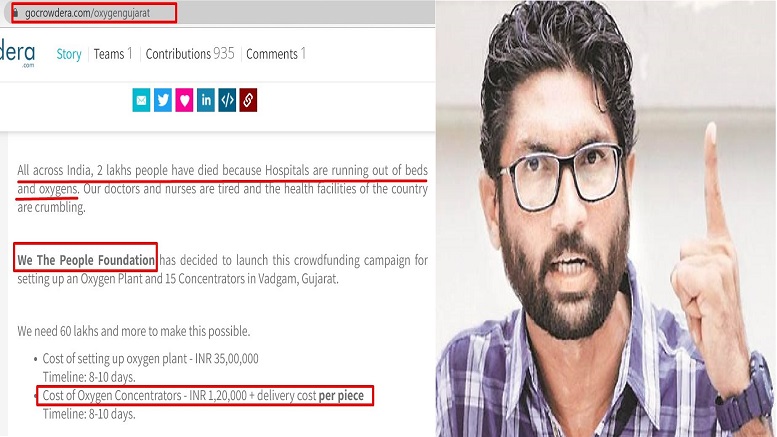 The bank accounts of an NGO named ‘We The People Charitable Trust’ were frozen recently by the Charity Commissioner of Gujarat following discrepancies in the raising of funds through its association with Jignesh Mevani, the Independent MLA from Vadgam, who won with Congress and AAP support.

Incidentally, this is also the same NGO that Hindu-bashing ‘journalists’ were trying to promote while trying to discredit Hindu NGOs, especially the US-based Hindu non-profit service organization, Sewa International. Sewa meanwhile has brought in Rs. 66 crores for Covid relief and continues to do so uninterruptedly via proper channels.

Towards the end of last month, Mevani decided that he needs oxygen concentrators and plants for his constituency. He then advertised in Gujarati newspapers asking for funds from the general public to be donated to this NGO and mentions that he wants those funds for oxygen supply and ‘not for building a Temple or a Mosque’.

Notwithstanding the accusations of previous FCRA violations, the funds started flowing in. The Charity Commissioner, Y M Shukla started receiving oral and written inquiries about the NGO. Shukla cross-checked and found that the NGO in question was registered just in January of this year and that Mevani was not a board member. A deeper look also revealed that there was another ‘We The People’ NGO that started operations way back in 2003. This new one was a violation of the Emblems and Names Act of the IPC.

On 3 May, Shukla asked for clarification from the NGO about the board resolution passed for setting up an oxygen plant and the role of Mevani in the whole deal. Shukla says they did not reply back to him, following which he decided to freeze their accounts. He has now sent a notice to the ‘trust’ to report to an Inspector of his with relevant documents and receipt books, for scrutiny.

He also added that some are out to dupe the public by hoarding life-saving equipment and drugs like oxygen concentrators and Remdesivir vials, to sell them illegally at obscene profits. This has hurt public sentiment in this dire situation. He appealed to the general public to come forward and inform them about such miscreants.

Interestingly, the gocrowdera crowd-funding website that Mevani is using showed false propaganda alleging that 2 lakh people across Bharat have died due to the non-availability of beds and oxygen (total deaths since the pandemic started are 2.5 lakhs). Appealing for 60 Lakh rupees, the NGO mentions the cost of oxygen concentrators as Rs. 1.20 lakh plus delivery charges when at the worst of times those machines are available at around 40K. Incidentally, Lutyens’ businessman Navneet Kalra was charged with black-marketing in Delhi for importing O2 concentrators from China for around 15-20K, and then selling them for 70K.

Meanwhile, Mevani had activated his leftist ecosystem. This is also the time when a Caravan/ Wire ‘journalist’ named Neha Dixit unleashed a baseless online campaign against Sewa International and urged the public to donate liberally to Mevani’s NGO. Simultaneously, celebs including Prakash Raj, Swara Bhaskar, Taapsee Pannu, Anurag Kashyap were busy retweeting Mevani’s ‘Help Gujarat Breathe’ campaign online. Now that the NGO is under the scanner, will these eminent personalities apologize to the public who they misled? Probably not!

Dixit subtly adds that as per her own 2016 ‘investigation’ she has found that Sewa Bharti, the parent organization of Sewa International, and RSS were ‘trafficking’ girls from vanvasi (aka tribal) areas. HinduPost had analysed that hit-job, which was a clear attempt at delegitimizing RSS-run residential schools for the underprivileged, an area that left-liberals like Dixit want Christian missionaries to have complete control over. Belatedly, an RSS Swayamsevak named Vivek Kumar has now filed a police complaint against that slander by Dixit.

Mevani, a lawyer himself, went ahead with his plan without taking permission from the Collector as legislated by the law. It is also clear that Jignesh requested foreign donors to finance a separate entity ‘Setu Centre for Social Knowledge and Action’ which has an FCRA license, but works in the unrelated area of Panchayati Raj, women empowerment etc. This FCRA-NGO has in the past received funds from a Dutch NGO which works in ‘security & rule of law’ sector, to do research on ‘district mineral funds’?! It also receives funds from an Indian org called ‘Keystone Foundation’ which in turn is funded by likes of Ford Foundation, Misreor (German state-funded Catholic Christian group).

Kamlesh Katariya, trustee of ‘We The People Charitable Trust’, said that to date they have not received any notice from the office of the Charity Commissioner. He claimed that  as one of the objectives of the NGO was to carry out “relief work for medical treatment, medicines and arrangement for the same”, hence they did not need to take prior permission from authorities. But he did not explain how one can set up an Oxygen plant without permission from local authorities like Collector! Without intimating safety regulators, how were they expecting to have the plant functional in 8-10 days as their fund-raiser claims!

At a press conference Tuesday, Mevani claimed ‘the NGO is being targeted only because I, Jignesh Mevani, raised funds by making a public appeal.’ The outburst felt more like desperation. The frozen accounts have not been confiscated, at least not yet and all that he had to do is go meet the Charity Commissioner with the necessary paperwork. That would have worked better than politicizing the whole issue. Mevani has a history of stoking violence, spewing casteist rhetoric and of being an opportunist.

His election to the Gujarat assembly is a perfect example. Mevani had the support of the Communists and once he entered the fray,  both the Congress and the AAP withdrew their candidates. It was Rahul Gandhi himself who had announced the Congress party’s support for Mevani.

Mevani was seen supporting the Islamic fundamentalists during the anti-CAA protests in Delhi. His Dalit-activism became apparent when a female Dalit auto-driver named Chithralekha, who was harassed by the casteist CPM goons in the Communist citadel of Kannur in Kerala, in her autobiography titled KL 13 L 8527 accused Mewani of being a pseudo-Dalit activist, writing that she was at the receiving end of caste discrimination at Mevani’s house when she visited Gujarat. She alleged that she was not allowed to use the washroom inside Mevani’s house and was asked to relieve herself outside!

A quick online check reveals multiple ‘We The People’ organizations accepting such donations online. One is based out of Maharashtra, one out of Delhi, and even one in Ranchi. In all probability, the rest are actual NGOs out to help the needy especially in this hour of great doom that the nation is facing. It is good that we have Charity Commissioners who are on the lookout for frauds, something that was unheard of as late as 2015.