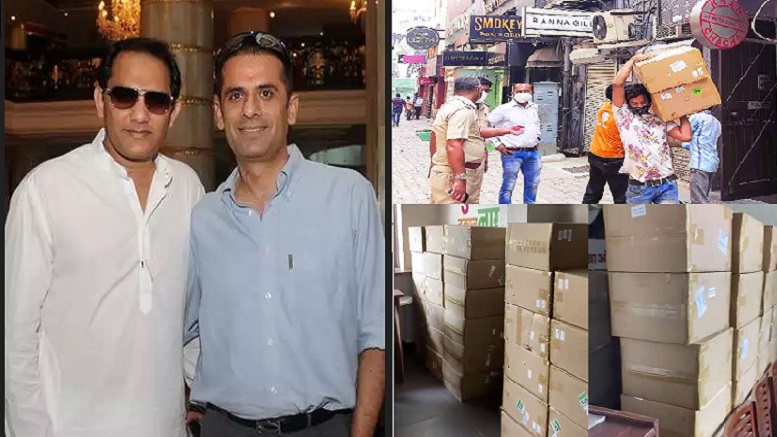 Delhi police are on the lookout for Navneet Kalra for his involvement in the black marketing of Oxygen concentrators. Navneet is a permanent fixture on the Lutyens’ party circuit with ties to many VIPs. He owns the Dayal Opticals chain and several restaurants in Lutyens’ Delhi. His popular ‘Khan Chacha’ and ‘Town Hall’ restaurants in the Khan Market area from where 105 concentrators were seized, is barely three kilometers from where ministers and Lutyens’ elites live. Another 419 concentrators were seized from Kalra’s Nege Ju restaurant and bar in Lodhi colony and a farmhouse in Khullar Farms, Chattarpur.

The air that we breathe is a mixture of 80% nitrogen and 20% oxygen. Oxygen concentrators work on electricity and filter out the nitrogen and accumulate 95% oxygen which is then delivered to the patients via a hose and two prongs that are inserted into the nostrils. Cheap Chinese concentrators, if ordered in bulk, are going for as little as $100 per piece (around Rs. 7,300/-), and other models for $229. Raids at Kalras’s hotels recovered stickers of maximum retail price (MRP) of Rs 69,999 per machine!

The police later arrested Gaurav Khanna, a close friend of Kalra and CEO of an entity called Matrix Cellular Services Ltd. This company has been reportedly importing these life-saving machines for many months from a supplier in China. The role of this company and its owner Gagan Duggal (a London resident) that basically deals in SIM cards is being investigated by the Delhi Police. Duggal is alleged to be partners with Kalra.

Kalra is accused of stocking the concentrators in his restaurants spread all over the Lutyens’ area and at a farmhouse in Khullar Farms owned by Duggal. It is alleged that he was then selling them online and via WhatsApp to his clientele for huge profits during the time of the pandemic.

Media reports say that police patrols found suspicious activity at an uptown eatery owned by Navneet called the Nege & Ju restaurant at Lodhi colony, which is when the entire racket unraveled. There is some speculation that a disgruntled customer spilled the beans on Kalra’s racket. Others believe that this black marketing in the heart of Lutyens’ Delhi had the protection of bureaucrats and power elite, in lieu of Kalra ensuring preferential Oxygen supply to them.

Who is Navneet Kalra?

Navneet Kalra’s father had established an eyewear chain called Dayal Opticals. Sources tell HinduPost that his fortunes really sky-rocketed after his marriage sometime in 2007. It is said that his wife, Kitty, brought with her two shops in Khan Market as dowry. Kitty is the daughter of Sirajuddin Qureshi who owns Hind Agro Industries Ltd. which exports halal meat.

Qureshi is also the President of the India Islamic Cultural Centre and an influential figure in Lutyens’ circles. Last year, Qureshi was named in an FIR along with others and his premises raided by CBI for allegedly cheating a consortium of banks led by PNB of about INR 222 crore.

In the years following his marriage, Kalra’s access to funds increased manifold and he is now believed to own around a dozen properties (shops and restaurants) in Khan Market alone. Dayal Opticals also grew to over 15 stores in Delhi NCR. The couple became a well-known face on the Lutyens’ party circuit. As per wife Kitty, Kalra is ‘crazy about superbikes and cars’.

It was during this period that he also allegedly partnered with disgraced former cricket captain and ex-Congress Lok Sabha MP (2009-14), Mohammad Azharuddin, as per our source. This association set the ball rolling and many after-match cricket parties started to be hosted at Kalra’s restaurant. There were murmurs of his involvement in illegal cricket betting too. While many leading cricketers were spotted at these parties and Kalra’s events, Harbhajan Singh was an especially frequent visitor.

Kalra’s Town Hall restaurant located in the Khan Market complex is extremely popular with politicians, with Sonia Gandhi also having visited, and it is said that Rahul Gandhi is often seen waiting patiently for a table there.

The Khan Chacha restaurant is the jewel in Kalra’s crown but has had its own share of controversies. It was originally owned by Haji Banda Hasan known as Khan Chacha since 1972. In 2009 Hasan’s sons decided to partner with Kalra in exchange for an infusion of funds. By 2016, Kalra owned the place and the original owners were kicked out unceremoniously. They alleged that Kalra forged documents to stake his claim to ownership and the goodwill of the firm, a claim that Kalra denied.

The Manager of a bar and restaurant owned by Kalra admitted to cops that they have sold around 2000 such machines since shipments started to arrive. Various sections of the IPC, Essential Commodities Act, and Epidemic Diseases Act were charged against four accused persons and they have been remanded to custody. Delhi Police suspects a deeper nexus and is investigating.

Police also obtained a WhatsApp voice message dated 26 April where Kalra is heard asking potential clients to book by 3 pm. The first raid that the cops conducted revealed a website that was taking bookings online named ‘Xpect Everything online’.

Interestingly, this was happening when the AAP government was actively milking the oxygen crisis for political capital in the national capital. Both Government and private hospitals were scrambling for oxygen and the general public had lost all faith in the healthcare system. The only other option for folks was to buy an oxygen concentrator that seriously ill corona patients could personally use at home. Rather than work for a resolution, was the AAP feeding the frenzy?

Interestingly, during its induction ceremony last year, the AAP government in Delhi had felicitated 48 ‘distinguished personalities’ of Delhi including Navneet Kalra calling them ‘Delhi Ke Nirmata’, those who built Delhi!

Obviously, the proceeds from businesses like spectacles and eateries did not suffice for Kalra and greed is what has brought him to a situation where he is absconding.