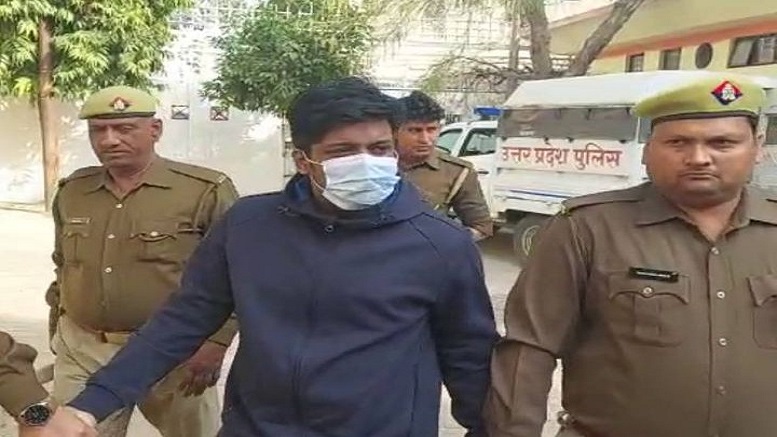 PFI official K A Rauf Sharif who had conspired to provoke caste violence in Uttar Pradesh and was earlier arrested from Thiruvananthapuram Airport has now been taken to Mathura by a Special Task Force (STF) of the UP police. He is being investigated for his role in the Hathras case involving his Delhi & UP based PFI colleagues. Earlier, four other members of PFI who were apprehended from Mathura in UP had revealed that they were following the instructions of Rauf Sharif.

Rauf is PFI’s National Secretary of its youth wing called the Campus Front and is a qualified Chartered Accountant. He had earlier evaded investigating agencies mentioning Covid, quarantine and illness. He was nabbed when he tried to flee the country.

The four arrested on October 5th last year included Siddique Kappan from Malappuram, a ‘journalist’ associated with an online publication affiliated with the PFI. Others included Atiq Ur Rehman from Muzaffarnagar, Masood Ahmed from Bahraich and Alam from Rampur. Another accused is Danish from Muzaffarnagar, but High Court has ordered a stay on his arrest.

The Hathras case is centred around the tragic death of a young girl who was reportedly in a relation with a youth from her village, but both their families were opposed to this due  to a long-running feud. The case attracted the attention of the entire mainstream media and NGO-activist lobby who were desperate to present it as a ‘caste atrocity’. It was found that a Naxalite woman even infiltrated the village and posed as a bhabi (sister-in-law) of the victim while giving incendiary bytes to media crews visiting the village.Anti-Hindu hate groups like Bhim Army also played a role in coaching and pressurising the victim family to toe their line.

PFI activists were already under surveillance for their roles in funding the anti-CAA protests and the riots in Bengaluru. According to the police, sensing an opportunity, Kappan and his gang were heading for Hathras in UP with an agenda to foment riots. They were accused of having objectionable and inflammatory literature on them and have been charged under UAPA sedition laws.

Rauf was evading an Enforcement Directorate (ED) enquiry into a money-laundering network after it was found that huge amounts were being transacted through his bank accounts from suspicious foreign accounts. ED has now submitted in court that it was Rauf who had arranged funds for Kappan and his fellow conspirators for their journey to Hathras. The court then sent Rauf to judicial custody for 15 days.

Three bank accounts were maintained by Rauf and transactions worth 1.35 Crores happened between 2018 to 2020. There are also apprehensions about around 30 Lakhs which he received from foreign entities during the lockdown period last year, ie. April to June. Purpose mentioned is payments to hotels but no hotels were functioning in Bharat during that period. Rauf also has land and vehicle purchases transacted through such accounts.

Rauf also has cases registered by the National Investigation Agency (NIA) against him for his role in organising a weapons training camp at Narath near Kannur. As usual, funds were being funnelled through suspicious accounts to arrange the camp.

ED has evidence of PFI receiving over 100 crores in its bank accounts over the years, most of it deposited in cash. Monies received were then being funnelled through various sources to operatives on the ground.

Since his arrest in December 2020, sources say that Rauf is not cooperating with the investigating officers. He has not revealed the source of his foreign funds. The ED claims it has evidence of his role in funding both the anti-CAA and other anti-Bharat protests. This has forced the ED and the UP police to bring him to Mathura where he will be further questioned.

Meanwhile, Kappan has been granted five days of conditional bail to visit his mother who is said to be on her deathbed. UP police have been asked to ensure that he does not speak to the media and can interact only with his relatives or the medical staff attending to his mother.