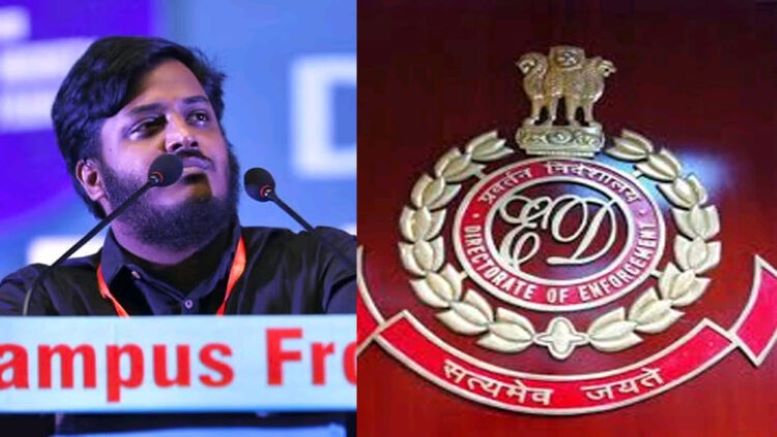 Rauf Sharif who is the General Secretary of the Campus Front of India (CFI) was arrested by the ED (Enforcement Directorate) on 12th December from the Thiruvananthapuram International Airport while attempting to flee the country. Reports state that ED discovered around INR 2.21 crores in the bank accounts of Rauf.

Rauf Sheriff was arrested by ED yesterday from Thiruvananthapuram International Airport while he was trying to leave the country.

CFI is the student’s wing of the radical Islamist organization PFI (People’s Front of India) of which Rauf is the General Secretary (GS). Rauf, a resident of Kollam district’s Anchal, has also been associated with the banned Islamist group SIMI (Student Islamic Movement of India).

Reports state that Rauf was involved in both the Hathras case as well as the Delhi riots and a look-out notice had been issued against him in the latter case by the UP police and he is expected to be taken to UP for further investigation.

The ED on Sunday had alleged at a court in Kerala that Rauf had been receiving large sums of money through suspicious activities in his bank accounts. It further said that Rauf had also been evading ED summons in a criminal money laundering case in which the Kerala based radical Islamist group PFI  was being probed.

Rauf is believed to be maintaining three bank accounts and between 2018 and 2020 one of the accounts is said to have transactions to the tune of ₹ 1.35 crore. Between April and June 2020, Rauf is said to have received ₹ 29.18 lakhs from two people purportedly for a hotel stay when hotels were actually closed during the period due to the pandemic situation.

The ED report also says that Rauf had undertaken major high-value expenses for buying land and vehicles in addition to transactions to the tune of ₹ 20 lakhs in his Axis bank account in 2020 all alone. All these suspicious financial activities led the ED to step up its inquiry against Rauf.

The central agency while demanding Rauf’s judicial custody has alleged that Rauf has not been cooperating with the investigations and refused to divulge information regarding his foreign remittances when the agency was recording his statement at the Kochi Zonal office.

Reports indicate that the court has accepted the agency’s plea and remanded Rauf to 14 days of judicial custody.

As per the ED remand report, it was Rauf who had sponsored Delhi-based Kerala ‘journalist’ Siddique Kappan’s and three others’ trip to Hathras following the death of a Dalit girl as a conspiracy to instigate caste violence following the unfortunate incident.

A case had also been registered against Rauf at the Mathura Police Station for fanning caste violence. Prashant Kumar, ADG (Law & Order) of the UP police has stated that a team of the Anti-terrorism Squad (ATS) has been dispatched to Thiruvananthapuram to take Rauf into custody for further inquiry regarding his role in the Hathras case.

Rauf Sharif’s arrest follows the arrest by UP police of four PFI members in connection to the Hathras case. The four arrested accused have been identified as Siddique Kappan, Atiq ur Rehman, Alam, and Masood Ahmed.

Rauf has also been involved in funding the anti-CAA protests that fuelled the anti-Hindu Delhi riots causing large scale damage to Hindu properties in addition to deaths of innocent Hindus.