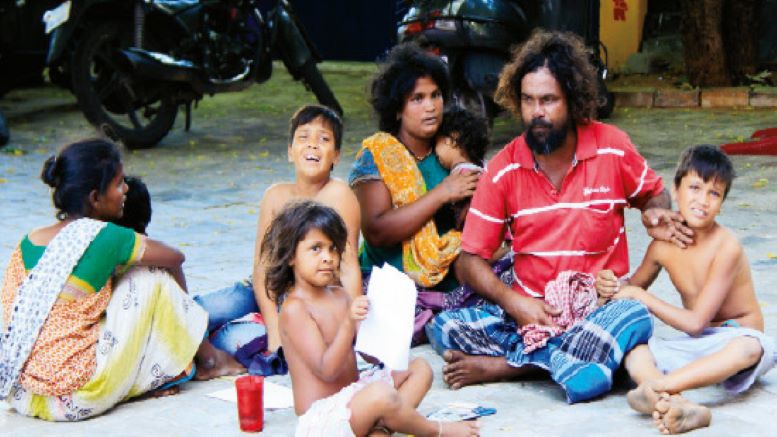 Narikuravas, one of the nomadic tribes of Tamil Nadu, protested against the missionary atrocities in Kanchipuram last week. A group of them living in Kuruvimalai, Kanchipuram in the land allotted to them by the government made allegations of encroachment attempts by a pastor. This nomadic community leads a simple life and most of them earn their living by selling trinkets in public places.

They usually live in huts which they leave to sell beads in various places not returning for months at times. However as the government has provided free land for them, some of them have managed to build houses with the help of housing schemes. It is said that some of whom still live in huts haven’t been given patta as authorities didn’t recognize that they were living in the huts. The community alleged that these lands without Patta have been encroached by a pastor K.Thangaraj to build a church when they were away for work. It is alleged that he usurped 4 housing plots and constructed a church in a vacant land measuring 50 cents. The affected people staged a protest at the collectorate demanding that the attempts to evict them be stopped.

Story in a local MSM channel covers the protest by Narikurava (in olden times, nomadic) women. They had been given land in Kuruvimalai, Kanchipuram & been living there for 15 years. Recently a Pastor Thangaraj has encroached ~50cent land (4 houses+1 PrayerHouse). Want him evicted https://t.co/COTF617ycT

As per Tamil news reports, nearly 50 families of the nomadic community have been living in the free land allotted to them for more than 15 years. A pastor K.Thangaraj has allegedly usurped 50 cents of land belonging to 4 families and built a church. When the people demanded their lands be returned the pastor threatened them and set off some local rowdies on them. The complaints filed in the local police station by the affected community didn’t yield any concrete result and it is alleged that the Sub Inspector of the concerned police station is rather supportive of the anti-social elements.

This prompted the community to picket the collectorate and present their case to the district collector. They were assuaged by the revenue officials and police that their complaint will be acted upon and justice served. But two days after registering their complaint with the collector the head of the community who led the party to protest was attacked by the same anti-social elements and admitted to the hospital in a critical condition. The community once again went to the collectorate to protest. But the pastors and the inspector from the local police station tried to diffuse the situation by agreeing to act upon pastor Thangaraj and the anti-social elements.

Narikurava colony in Kuruvimalai has one Jesus Love Prayer House run by a pastor Yudha established for the sole purpose of spreading the gospel among the Narikuravas. This prayer house has 4 branches in other places of Tiruvannamalai and Kanchipuram districts where scheduled communities live as a community. Their work involves preaching the gospel to Scheduled Tribes, conducting catechism classes, children’s ministry, Sunday, and Summer Bible classes as mentioned in their Weebly page.

Another missionary NGO, Accord Trust works among the Narikuravas, Irulas, another nomadic community targeted by missionaries, and Sri Lankan refugees. The founder of Accord Trust, Pastor Vinodh Prem Das is associated with All India Christian Federation, TN which organizes so-called social works and outreach programs like medical camps and awareness programs. Accord Trust works among the Kui tribe of Odisha, West Bengal, Andra Pradesh, and Uttar Pradesh as well, organizing literacy programs, medical camps, and outreach programs for children. Their website paints a gloomy picture of children they groom as ‘forced to child labor due to insufficient care and love from their parents’. The organization lists Church Planting as one of its objectives and indigenous people and children as their targets.

In the past HinduPost has covered a similar incident of child evangelism where missionaries lured children of the Narikurava families with food and stationery and took photos of them to post on their website as orphans to beg for funds from foreigners. It ended in favour of the evangelists as usual with the help of well-connected activists. In this case, no FCRA connection could be established. However, it must be remembered that FCRA registered organizations that receive foreign donations pass it on to other smaller missionary organizations to avoid the detection of evangelical activities which is illegal.

The Narikurava community which lives in abject poverty most of the time is easy prey for the missionary vultures. They have no ration card as they roam around selling beads. They face difficulty in getting community certificates to enroll their children in school with arrogant government officials being unhelpful. Thus they have no option but to take the children along wherever they go.

There are numerous incidents of Narikurava children picked up from public places for selling trinkets and placed in orphanages, predominantly run by missionaries, as the Right to Free and Compulsory Education act necessitates the children to be compulsorily placed in schools. It mandates the state government and the concerned authorities to ensure compulsory admission, attendance, and completion of elementary education to every child in the 6-14 age group. While education is a fundamental necessity, who imparts it makes all the difference in the world. With childline workers and so-called social activists being predominantly from a single religion what they do with the children they get their hands on matters.

The orphanages they are placed in by the Child Welfare Committee authorities are not likable to children and the instances of running away are too frequent to be ignored. However, police trace them and dump them back in the orphanages. It need not be specifically pointed out to the readers of HinduPost as innumerable incidents of sexual assaults in missionary run institutions have been reported in HinduPost in the past.

They also face ostracism from society as they are mistaken for thieves and child-lifters. Their profession demands them to travel most of the time which makes their kids miss out on education. The unholy nexus of child rights activists and missionary orphanages take this as an opportunity to snatch them away from their parents and teach them the right kind of ‘education’. The shocking fact is that such a downtrodden and disadvantaged community was grouped as the Most Backward Community until the Modi government granted them ST status in 2016.

They still struggle to get official documents such as ration and Aadhaar cards to avail government schemes and such news can be seen in MSM often. As they are in negligible numbers politicians do not care for their welfare except during elections. Thus they become easy prey for missionaries who entice them with free Tuition for children (with snacks to woo them to attend regularly), lending money through Self Help Groups for micro-businesses such as petty shops, cattle rearing, tailoring, etc. They also help them get documents that earn the much-needed trust to brainwash them into converting.

To stop missionaries from taking advantage of these poor nomadic tribes, it is the duty of every dharmik, re-energized with the regaining of Sri Ram Janma Bhoomi, to lend a helping hand in every possible manner.