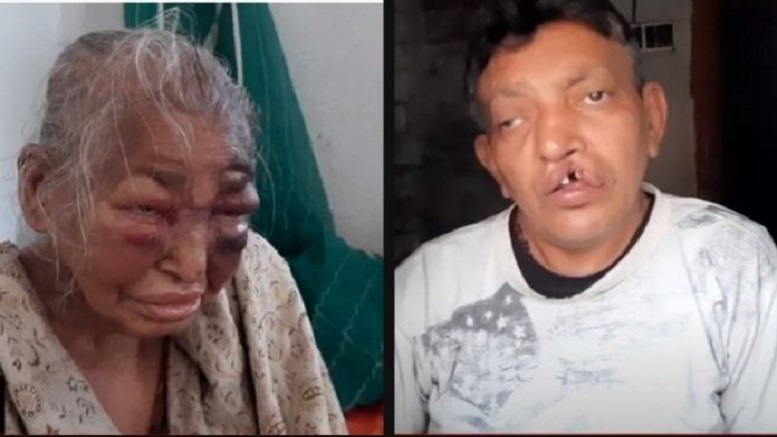 At around 1.30 am on Friday night (early hours of Saturday), some miscreants broke open the door and entered Gopal’s house. He was beaten with the butt of a gun. Even his 70-year-old mother was not spared and the elderly woman’s face and eyes were all swollen up after the attack.

Gopal Majumdar’s mother said, “They hit me on my head and neck and punched me. They hit me on my face too. I’m scared, they asked me not to tell anyone about it. My whole body is in pain. ”

Face of the 70 year old woman beaten brutally by TMC liberals in Bengal.

This photo should have been on the first page of every newspaper, on the timeline of every BJP leader, the talking point on every channel.

But it is not. pic.twitter.com/1OsHBOU0Ux

As per Aaj Tak Bangla, BJP claimed that the houses of several BJP workers of the ward had been attacked earlier. After the dreadful incident on Friday night, local BJP workers rushed to Gopal’s house and Nimta Police Station was informed immediately. The officers of Nimta Police Station took the injured to a local hospital where they were discharged after initial treatment.

The aggrieved BJP activist Gopal Majumder claimed that some goons broke down the door of his house with sticks at around 1.30 am and threatened him as he supports BJP. “I asked them what is the crime of supporting BJP?” he narrated.

He further added that suddenly they started beating him and also did not spare his aged mother. Tension spread in the area after the incident and police was deployed.

The attackers were not locals as per Gopal but he strongly believes that they are TMC goons. TMC has denied the allegations completely as is their wont after each such incident. They even claimed that ‘no such incident has taken place anywhere in North DumDum’ and stated that the BJP is trying to ‘occupy this ward by bringing in people from outside’ and that its is a ‘battle between the old BJP and the new BJP’.  TMC MLA of the area, Nirmal Ghosh, claimed that the incident is a ‘domestic matter between family members’.

Such is the normalization of political violence in West Bengal by mainstream media and Nehruvian intelligentsia that even the gruesome image of the beat-up senior citizen did not evoke any empathy from them. TMC leaders and CM Mamata Banerjee have been allowed to get away with their brazen dismissal of the whole incident.

If the same had happened with an opposition party worker’s mother in a state like Gujarat, English-language dailies would splash the same image on their front page and the incident would have dominated the news waves for days. Hindus have been dehumanised to such an extent by our left-liberals that a Hindu life hardly matters for them anymore, especially lives of Hindus who are proud of their religion and culture.

Some netizens were comparing this shocking assault to a similar attack in Mumbai (capital of another presently ‘secular’ state) on 62-year-old retired Navy officer Madan Sharma for forwarding a WhatsApp cartoon deemed critical of CM Uddhav Thackeray.