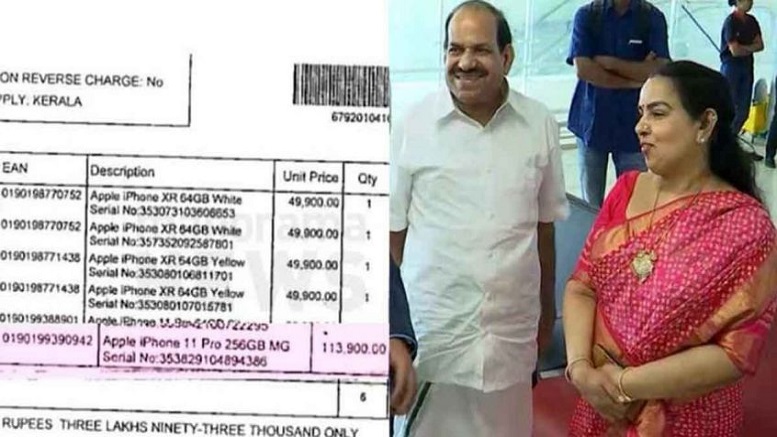 Vinodini Balakrishnan, the wife of former Kerala party secretary of the CPM Kodiyeri Balakrishnan has been summoned for questioning by the Customs department in what appears to be the last link of a bribe to curry favor with the ruling party. She was asked to appear at Customs’ Kochi office and explain the source of an iPhone in her possession.

The high-end iPhone was part of a set originally bought by a building contractor, Santhosh Eapen of Unitac Builders, at the suggestion of key-accused in the gold smuggling case Swapna Suresh who was working with UAE consulate at the time. These were then handed over as gifts at the UAE National Day celebrations that happened towards the end of 2019. The high-end one was gifted to the Consulate General who rejected it for another model of his choice, and that is how it reached Vinodini.

Even after the gold smuggling scam was busted, this handset remained active. It was switched off later on when an alleged front company called UAFX of Vinodini’s son, Bineesh Kodiyeri was raided and the handset has remained silent ever since. The investigators painstakingly looked through sale codes, IMEI number, and sim card data to confirm that the SIM card was brought by Vinodini and that the said handset was with Vinodini all this while.

It is also said to have been used by Bineesh and he had reportedly contacted several of his cronies both locally and internationally using the same SIM card. Bineesh and a few of his accomplices are currently lodged in the Parappana Agrahara Jail in Bengaluru on charges of drug-running, money laundering, hawala and other crimes.

Bineesh’s friend Swapna Suresh, who he allegedly helped escape when the gold smuggling case broke, is now petitioning the court fearing for her safety in jail and her family’s living in Thiruvananthapuram. Last year, the then CPM party secretary, Kodiyeri Balakrishnan was forced to resign following his son’s arrest.

Kerala Life Mission is a state government entity headed by the Chief Minister himself that promises free housing for ‘all’ in the state. In July 2019, towards the beginning of a flood raging and devastating large tracts of land, Unitac was hurriedly and secretly awarded a contract to build 140 apartments under the Life Mission scheme using 20 crores that they received as full payment in advance from UAE-based Red Crescent at Vadakkanchery near Trichur. The land was allocated by the government.

Life Mission is just an off-shoot of the Pradhan Mantri Awas Yojna, twisted to use foreign funding. The Vadakkanchery Life Mission case lingers in court and this is what the Kerala High Court had to say in that regard, recently.

The court then goes on to absolve the chief minister and his cabinet of involvement by blaming the non-political executive!

It is alleged that donations were solicited from Arabs at a time when half the state was under several feet of water and then such charity received was shared between a select few elite as grafts. It originated in the form of a ‘charity project’ that became a source of corruption and kickbacks worth 4 crores (out of a total project cost of 20 crores) have been uncovered by investigating agencies. The project was awarded to Unitac Builders and its sister company Sane Ventures, and the iPhones were used to grease the wheels with powerful players. The bulk of the commission was siphoned off by the UAE consul-general, an Egyptian national Khalid who worked at the consulate, and Swapna Suresh.

Having paid bribe amounts upfront and having been arrested, Eapen having completed just the structure, has recently stalled work, naturally citing financial issues. Some estimates put the figures at 10 crores in commissions against 10 crores for the actual construction, with many local leaders too having their palm greased. By hiding the purported MOU signed between Red Crescent and Kerala government to date, the CPM has not done itself any favors and now doubts are being raised about how the whole Life Mission operates.

Officials investigating the gold smuggling case stumbled upon the reverse hawala aspect as they wove backward searching for financial sources. Swapna Suresh who coordinated the gold smuggling for the cartel confirmed that the 1 cr currency found in her locker was part of a total of 4 crs she received from a project called the Life Mission. Her role here was plain and simple. Collect the money and take it out of Bharat in form of US dollars, after obviously taking her cut.

This she allegedly did in collusion with the building contractor, her cronies, and UAE Embassy staff. Unitac’s Eapen arranged the black money in US dollars and Khalid (the UAE Embassy staff from Egypt) helped smuggle it to the gulf.

That other projects under Life Mission scheme were cleared by the state government even after these revelations originated, smacks of collusion. To understand the scale of operations, one should consider the fact that this is just one project out of a total of 8823 crores that have been spent on first two phases of the Life Mission scheme. How much commission was siphoned off for the other projects?

The CPM leadership is in denial but it seems the Customs department has strong evidence this time around against the Kodiyeris. Investigating agencies are reportedly claiming that all such corrupt transactions were known to Pinarayi Vijayan and P Sreeramakrishnan, the Kerala Assembly speaker. M Sivsankar IAS was the middle man used. Such revelations do not look good for a party that prides itself on a socialist ideology and cadre-based structure. That their leaders accept ‘gifts’ of iPhones worth more than one lakh rupees while going around speaking about workers rights is pure hypocrisy.

What this gold smuggling saga has done is expose the hollowness of those who claim that Kerala is a role model of ‘progressive, clean, people-oriented governance.’ CPM-ruled Kerala is arguably one of the most corrupt state governments the country has seen, at par with the SP and RJD governments of the past. Nepotism, backdoor appointments, smuggling rackets, hawala, narco-terror funding, corruption scams, sex abuse rings  – Kerala’s ruling politicians and elites have their hands dirty with all these. Add the core ideology of terror and ruthless political violence under which Communists and Islamist outfits like PFI and IUML operate, and you begin to wonder if modern Kerala really is “God’s own country”?