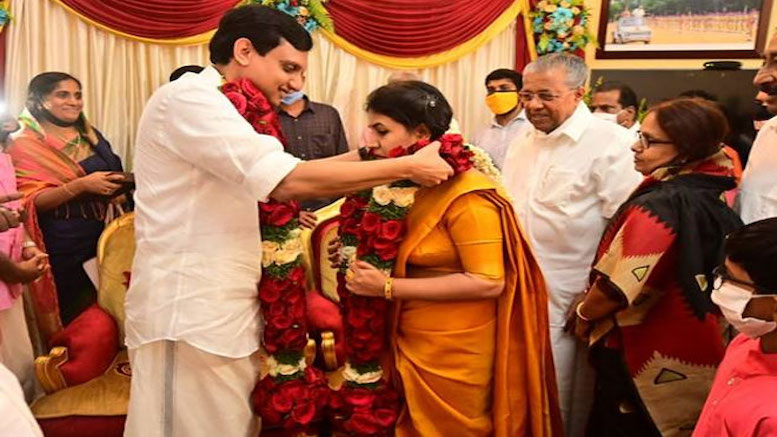 Veena Vijayan, daughter of Kerala CM Pinarayi Vijayan, has married DYFI (Democratic Youth Forum of India, the youth wing of CPM) National President P.A. Muhammed Riyas. This is the second marriage for both of them. Riyas who was earlier married to Dr. Sameeha Saithalvi and divorced a few years ago, while Veena`s previous husband and family details are mostly unknown. Both have children from their previous marriages.

Veena, although tech-savvy, doesn’t appear on social media. She has completed her computer software bachelor’s degree from none other than the private Mata Amritanandamayi Institute around 2006-2007. That was also the period when violent student agitations were taking place in Kerala against private institutions gaining entry into the college education system. These were led by none other than the communists of Kerala.

After completing her education, Veena had worked for various IT firms. Prominent and controversial among them was her CEO position of RP Techsoft, a company owned by billionaire Keralite Ravi Pillai. Ravi was also into the construction, hotel and hospital industries. This foray into the IT sector had raised many eyebrows, especially since such a senior position was offered to a relatively junior person like Veena.

Like many other controversies (like Vijayan flying to capitalist US for treatment) regarding the communists in Kerala, the story of this crony capitalism also soon died fearing a violent backlash from the morally blind and corrupt party cadre. What Vijayan was treated for in the US is still unclear.

In 2014 Veena decided to venture out on her own and started a one-person company called Exalogic Solutions Pvt. Ltd. Her decision to shift base to Bengaluru (BJP-ruled state) instead of investing in Kerala didn’t surprise many. Although Kerala has Infoparks and Technoparks specially dedicated to the IT sector, labour and union issues plague many firms. Vijayan meanwhile came to power in 2016 and started wooing foreign investors to invest in the state but his own daughter continued her stay in Bengaluru.

In fact many investors, including Lulu Chairman MA Yousuf Ali, were critical of red tape and labour issues and none came forward to invest in the state. Yousuf Ali in fact invested around 500 Crores in a single real estate property at Lucknow and has openly admitted that he is a fan of UP CM Yogi Adityanath. The biggest mall in Bharat is coming up there.

The end of January saw the emergence of Covid-19 in Kerala. Shortly after that, the state govt decided that Covid data analysis had to be outsourced. Kerala had C-Dit and various other firms in the various IT parks ready to work on such data but mysteriously, a company called Sprinklr based in the US was selected. Sprinklr is owned by NRI Keralite Ragy Thomas and Exalogic was providing technical assistance to them from its Bangalore office.

Why was Sprinklr chosen for such delicate data analysis of thousands of Keralites, remains a mystery? Explanations given were vague especially since Vijayan himself holds the IT Portfolio of the state. The opposition INC did ask that if the central govt headed by Modi could handle data of 130 plus crore citizens, why couldn’t any Bharatiya firm handle Covid data of 3 crore Keralites?

The High Court of Kerala had to intervene and asked the state govt to ensure safety of the data. It also asked the govt to ensure the consent of the patient before sharing of data with Sprinklr (which was earlier being transferred without the patient’s consent!). A few days later, the data of around 1.5 Lakh Kerala Covid patients appeared online and was available to all and sundry upon payment of a fee. Alarm bells started ringing and Exalogic hurriedly shut shop even though they had paid advance taxes. Their website disappeared.

The firm, which was a loss making one since its inception in 2014, was showing extraordinary profits since 2016 (the year Pinarayi formed his govt in Kerala). Further scrutiny showed that Exalogic had given its physical address for company registration as AKG Centre (CPM party office address) and that Veena had nominated Kamala Vijayan (Vijayan`s wife and her mother). Why and how could someone use a party office to register a private company is anybody`s guess.

P.M. Abdul Khader IPS was the Commissioner of Police, Kozhikode from April 2000 to June 2001. There were rumours that the seeds of discontent being sown by the NDF (National Democratic Front, predecessor of the quasi-terrorist Islamist group PFI) and the IUML during this period eventually ended in the Marad massacre of 2003 where 8 Hindus were murdered.

Inquiries hinted that higher-ups and the political elite had prior knowledge of the murder and attacks being planned. A.K. Antony(INC) and P.K. Kunhalikutty(IUML) had vehemently opposed a CBI probe into the massacre. The first attack happened on 3 and 4th January 2002. P.A. Muhammed Riyas is the son of this very same IPS officer, P.M. Abdul Khader.

Riyas has faced domestic violence charges from first wife Dr. Sameeha Saithalvi. A qualified doctor, she was not allowed to work after her marriage to Riyas. She has alleged dowry violence, violent beatings and has even accused Riyas of trying to kidnap their two sons. Although they divorced many years back, the domestic violence charges were still being fought in court until they were mysteriously dropped a few days back just before Riyas and Veena opted for a registered marriage.

Riyas had earlier led ‘beef cooking’ protests after the Centre sought to regulate the purchase and sale of cattle to ensure adherence to safety and hygience practices. He had also unsuccessfully contested for Kozhikode Lok Sabha seat in 2019.

There are also rumours that MA Faris Abubaker, a highly controversial yet covert figure in Kerala, is linked to Riyas. The same names had popped up when the SNC Lavalin corruption case against Pinarayi had come up when he was the Electricity Minister. Only V.S. Achuthanandan and T.P. Chandrasekharan had opposed Pinarayi in the SNC Lavalin corruption scandal. Chandrasekharan, a local leader was hacked to death after he had abandoned the CPM and started a new party. Achuthanandan meanwhile has been sidelined to a position of no real importance but is still used as a tool only during elections.

With such a track record of the bride and groom, how could their wedding party be left behind? Riyas’ cousin, Mohammed Hashim, a man convicted in 2017 by Supreme Court and sentenced to 7 tears imprisonment for the murder of RSS worker Ottapilavu Suresh Babu 24 years ago, came out on parole and attended the wedding at the Kerala CM’s residence, as one of the select 50 guests.