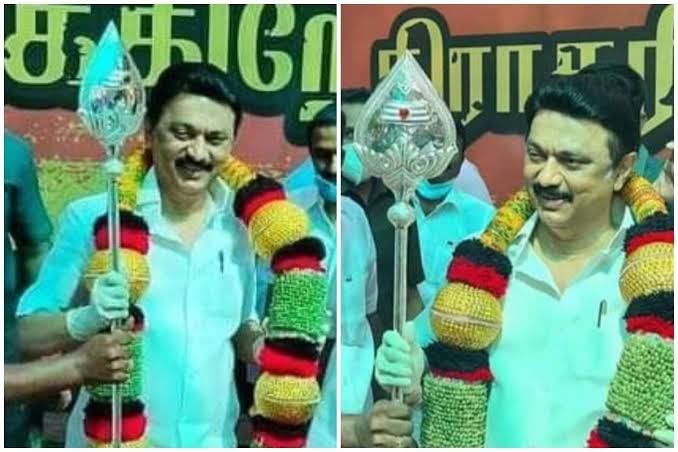 DMK, the political party that was formed by those who left Dravidar Kazhagam, the most anti-Hindu, anti-Brahmin organisation in Tamil Nadu, has been forced to pay visits to Hindu religious gurus and hold the Vel, spear of Bhagwan Skanda for Hindu votes before the upcoming assembly elections.

DMK and its leaders were endlessly abusing Hindu beliefs and customs till a few months back as is their nature. However BJP’s foray into the states and the constant exposes of DMK’s anti Hindu stand by Hindu outfits has created some level of awareness among the public.

Even though BJP is still seen as an anti-Tamil, ‘communal’ party, Vel yatra organised by the TN BJP unit seems to have created some impact. Because the same DMK that supported Karuppar Kottam, a YouTube channel that demeaned Skandasashti Kavacham, and helped the channel behind closed doors through their lawyers, has been now forced to declare that they’re not against Hindus and that most of their members are actually devoted Hindus. Even after this was exposed, DMK chief Stalin could be seen rubbing off the Thiruneeru (sacred ash) given at Muthuramalinga Thevar samadhi.

His son and DMK Youth Wing secretary Udhayanidhi Stalin refused to accept Purna Kumbham but started paying visits to Saiva Gurus and received their blessings. Udhayanidhi, who is seen as next in line for the party chief and CM position after his dad, posted the image of his daughter holding the murti of Ganesha on the occasion of Ganesh Chaturthi. But after severe backlash from Periyarists he issued a clarification saying that he is an atheist and that he posted it for his daughter. Kanimozhi, MK. Stalin’s sister, said DMK is the only party that raises its voice for the majority Hindus. In the past, she had mocked Tirupati Balaji saying “I could see armed guards protecting the Hundi. What kind of God is he, if he cannot protect his own wealth”. She also said that Tirumala Tirupati only caters to the rich.

Now, in a clear attempt to paint a picture that DMK isn’t anti-Hindu as constantly criticised by BJP and Hindu outfits, MK.Stalin himself posed with a silver Vel supposedly offered by one of the party functionaries. The functionary is said to be a contractor at the Tiruttani temple, one of the six abodes of Bhagwan Skanda.

Stalin has a habit of abusing Hindu customs in the presence of people who follow other religions. In a Muslim wedding he made fun of Hindu marriages saying they produce so much smoke people won’t be able to see one another. He also said that Sanskrit mantras recited during the marriage ceremony have a vulgar meaning which Tamils don’t realise.

Even recently, in a Christmas function organised by the party, Stalin let a woman claiming to be a Saivite religious figure speak ill of Hindu Dharma and say “There is no religion called Hinduism. It was created only 200 years ago…Islam and Christianity are older. Don’t say Hindus but say Tamilians”. Stalin also took part in the ‘Uproot Sanatana Dharma’ conference organised by VCK.

It must be brought to attention that Stalin defended Kollywood lyricist Vairamuthu, who masquerades as a poet, when he called saint poet Aandal as ‘devadasi’. He also expressed his support for VCK chief Thirumavalavan when he blatantly lied that Manu Smriti calls women ‘prostitutes’. In another instance when Rajinikanth said that Bhagwan Shri Rama’s image was beaten with chappals at EV. Ramasamy’s (aka Periyar) rally, DK chief Veeramani said that DMK won more seats after the incident.

Hiding the fact that late MK.Karunanidhi said that the word ‘Hindu’ means ‘thief’, now DMK leaders are out to prove that it was him who marched for the Vel to begin with when the Vel of Tiruchendur Murugan went missing. All this just to justify MK.Stalin posing with the Vel.