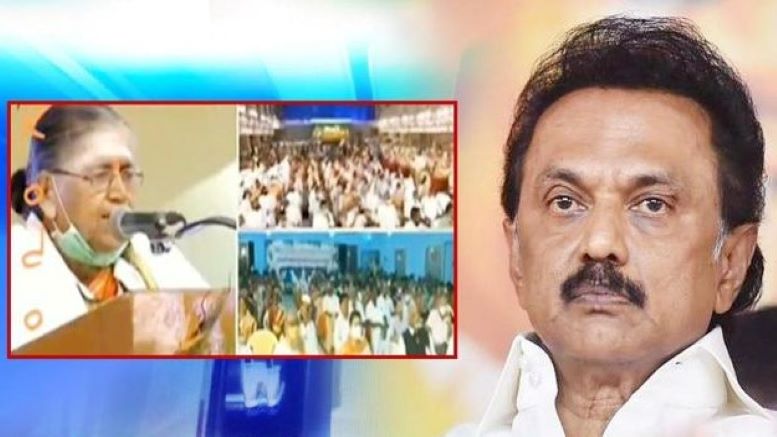 A religious preacher stoked a controversy saying that Hindu Dharma is only 200 years old and that the people of Tamil Nadu should identify themselves as Tamils and not Hindus. Speaking at a Christmas function organized by the Dravida Munnetra Kazhagam (DMK), preacher Kalaiarisi Natarajan, who claims to be a Shaivite, said that Hindu Dharma was only two centuries old and that Islam and Christianity are older than Hindu Dharma.

While DMK chief MK Stalin, in whose presence this ridiculous colonial-era claim was made, claimed to have worked for Hindu Dharma, Tamil Nadu BJP leaders alleged that the DMK was paying people to speak against Hindu Dharma in order to garner Christian votes.

BJP State Unit chief L Murugan said that Stalin is against Hindus and there was a recent incident where Bhagwan Murugan was insulted by his party. He was referring to the YouTube videos posted by  DMK-affiliated ‘rationalist’ organisation Karuppar Kootam which had attacked Bhagwan Murugan, revered poet-saint Andal, and also abused Hindu scriptures like Ramayana, Saraswati Purana etc.

BJP Spokesperson Narayanan Thirupathy added, “DMK is anti-Hindu and paying money to this kind of people to abuse the majority religion in order to gain Christian votes”.

As Tamil Nadu gears up for assembly elections next year, the anti-Hindu agenda seems to be ruling the roost considering the fact that the BJP has been attempting to gain a foothold in the state and that superstar Rajinikanth has announced the launch of his political party in January. As political churn is in the offing, hence DMK is ratcheting up its time-tested anti-Hindu narrative in the state.

Natarajan’s rant should be seen in the background of Kamal Haasan’s anti-Hindu stances in the last few days after he launched his election campaign. Haasan not only refused to accept the poorna kumbham offered by the priests of Kumarakotam Murugan Koil but also made derogatory comments about Hindu Devis and Devatas.

We can expect more such anti-Hindu tactics from several Dravidian parties in Tamil Nadu as the assembly elections draw closer. Hindu bashing seems par for the course in Tamil Nadu’s political discourse.