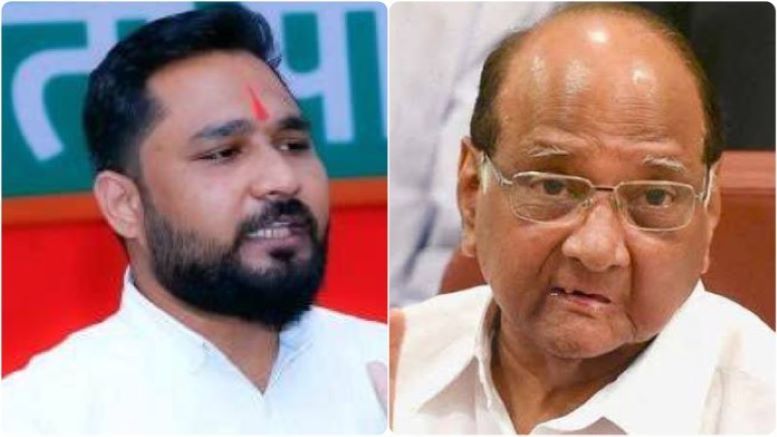 Pradip Gavade, Secretary of BJP’s Yuva Morcha was taken into custody by the Bandra Police Cyber Cell from his Pune residence on Saturday for allegedly criticizing NCP Supremo Sharad Pawar and his grandson Rohit Pawar. Gavade has been booked under sections 295A, 500, and 505/2 of the IPC as well as IT Act 67. Gavade was later released.

The arrest came a day after Gavade addressed his supporters and followers through a Facebook Live session where he said that he anticipated action from the Maha Vikas Aghadi (MVA) government as he had registered cases against about 54 people associated with the state government just about 8 to 10 days ago.

Gavade further said that these people had indulged in using offensive language against women with some even issuing threats of rapes and gang rapes to women. He said that he has all the pieces of evidence against the offenders and those interested can meet him in person for the same.

In his video, Gavade says “When I filed the case against 54 people, I knew something was going to happen to me. I am not afraid of any such action. After I filed a complaint against 54 people, we have all witnessed the pressure from the police. On the day, when I filed a case, a complaint was lodged against me by MVA Minister Jitendra Awhad. He tried to pressurize the police into acting against me”.

Gavade stated that two of his tweets have been picked up and multiple complaints have been lodged against him at several places including Pune and Mumbai. He said that he is being targeted only because he dared to criticize Pawars and asked questions of NCP leaders.

Gavade pointed out that both his tweets were in keeping with the freedom of speech guaranteed by the Bharatiya Constitution. While one of the tweets criticized NCP’s Mohsin Sheikh for posting a morphed picture of Yama Dev, the other was regarding Chisti.

He said “NCP office-bearer Mohsin Sheikh had morphed the photo of Hindu Bhagwan Yamadeva and put a photo of PM Modi on it. I condemned the tweet. The information I furnished about Chisti through my tweet was one that had been published on the website of Ajmer Dargah and I simply reproduced it. A complaint has been lodged against me for that too”.

Pradip Gavade said that even though his tweets weren’t offensive, cases have been registered against him. He raised questions regarding the law in Maharashtra and added that such pressure and intimidation tactics won’t bog him down.

It must be pointed out that Gavade isn’t the first who has been targeted by the MVA government. Uddhav Thackeray-led MVA government, in which both Congress and NCP are allies, has been stamping out all dissent and acting in a highhanded and intolerant manner by attacking and arresting ordinary citizens for simply voicing their opinions.

Here are some recent instances of highhandedness of the Thackeray government.

OpIndia report dated April 2020 said, “A non-cognizable offence against a doctor has been lodged by Aurangabad Police for allegedly sharing a post on social media terming the Tablighi Jamaat chief Maulana Mohammad Saad a ‘terrorist’. According to the police, the doctor had posted Saad’s photograph on social media with a caption, “Wanted, please inform your local police if you have any input about the location of this terrorist.”

Kharghar police took suo-moto cognisance and registered a case against a woman for allegedly posting ‘objectionable content’ on her Facebook (FB) profile against the Maharashtra government. Trupti Jaywant Desai, a resident of Kharghar, shared the video on her FB account demanding answers from the state government. In her post, Trupti Desai has demanded answers from the Uddhav Thackeray-led Maharashtra coalition government stating how come Hindu saints are being targeted in Maharashtra which is known as ‘Santbhoomi’ (land of saints/sadhus) and that too despite the presence of police officials. She has further stated we don’t want Maharashtra to be another Pakistan, a country known for its vicious persecution of Hindus and other minorities.

In yet another instance of goondagiri, a Thane resident was beaten up by goons of MVA cabinet minister Jitendra Awhad at the minister’s bungalow. Thane resident Anant Karmuse was abducted on the night of 5th April by policemen who then took him to Awhad’s bungalow for supposedly putting up a post against the minister. Karmuse’s complaint states that on reaching the bungalow, he was badly beaten up by 15 to 20 goons in the presence of Awhad. The assault had taken place at Awhad’s Thane bungalow over an alleged objectionable Facebook (FB) post.

“Shiv Sena supporters beat up a man in Mumbai over his alleged remarks on Shiv Sena chief and Maharashtra Chief Minister Uddhav Thackeray. As per reports, one Rahul Tiwari alias Hiramani Tiwari, a resident of Wadala in Mumbai had posted a remark on Thackeray over his remarks on the Jamia issue” reported OpIndia.

Shiv Sena goons publicly assaulted BJP leader Satish Katekar in Pandharpur for criticizing Uddhav Thackeray. “In what could be regarded as the consolidation of a fascist rule in Maharashtra, the goons of Shiv Sena blackened BJP leader Shirish Katekar with ink in public view for speaking against Chief Minister Uddhav Thackeray in Pandharpur. In a video of the attack on the BJP leader that has gone viral, Shiv Sena workers can be seen parading the BJP leader after hurling black ink on him. The Shiv Sena workers went on to hit the BJP leader with slippers as a policeman attempted to ward them off” the report by The Organiser said.

While on the one hand, ordinary citizens are assaulted and arrested for merely voicing their opinions and asking accountability from the Uddhav Thackeray-led state government, on the other rabid Hindu haters like Sharjeel Usmani are allowed to freely spew venom against Hindus. The targeting of Pradip Gavade is nothing but a continuation of the MVA government’s fascism.