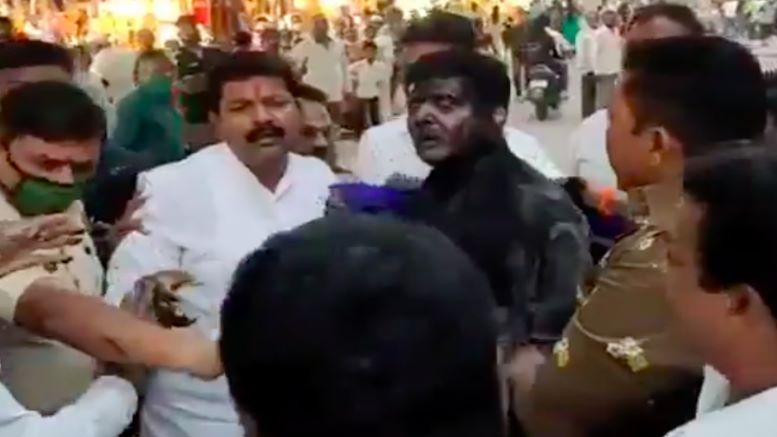 Let’s take a look at how ANI, a leading news agency which is often branded as part of the ‘Godi Media’, reported the assault on BJP leader Satish Katekar whose face was blackened with ink and he was beaten with slippers by the goons:

#WATCH I Maharashtra: Shiv Sena workers allegedly pour black ink on a BJP leader and forced him to wear a saree after the latter criticised Chief Minister Uddhav Thackeray, in Solapur pic.twitter.com/gdtL9gChT1

BJP leader Satish Katekar was assaulted in Pandharpur as he had raised his voice against inflated electricity bills. On February 5, several BJP leaders including ex-MP Kirit Somaiya were arrested by the Mumbai Police when they staged a protest against the Maha Vikas Aghadi (MVA) government for sending disconnection notices to 75 lakh electricity customers.

It must be mentioned here that the MVA government which had earlier promised to waive inflated electricity bills then did a u-turn by refusing to provide relief to customers and asked them to pay the inflated bill amounts. In view of this, the principal opposition party BJP in Maharashtra has been demanding that the MVA government honor its commitment. Katekar had only registered his protest against inflated electricity bills.

Reporting on the matter OpIndia says:

“The video was uploaded by one Prashant Jagtap, who identifies as ‘Shivsainik’ and handles the party’s social media. In the said clip, the goons could be seen surrounding the victim from all sides and blackening his face with ink. The victim has been identified as Shirish Katekar, who is an RSS Swayamsevak from Pandharpur in Maharashtra.

Katekar was forced to wear bangles (considered a sign of weakness by misogynists) and a saree was draped around his head. He was paraded in public and the goons sloganeered in unison. Despite the intervention of a police official, the Shiv Sena workers continued with their assault. Social media users have pointed out that the assault took place after the victim had criticized the Maharashtra Chief Minister Uddhav Thackeray.”

As is clear from the OpIndia article quoted above, the video celebrating the assault on Katekar was uploaded by a Shiv Sainik himself. Moreover, one can see the hapless senior citizen being manhandled by the Shiv Sena goons, and yet media outlet ANI chooses to report the despicable incident as “allegedly pour black ink”. Despite numerous allegations by the fascist ‘secular’ parties that ANI and others like Zee News are partisan pro-Modi media outlets (Godi media as they call it) favouring BJP, this is far from the truth.

As veteran journalist Minhaz Merchant had once pointed out in this 2015 article:

“But on every trip to Delhi – and Srinagar – from 2005 onwards, I noticed a distinct change in the interaction between journalists and politicians. It is around this time that the scourge of paid news became an epidemic…

…They revealed the nexus between politicians and journalists. The nexus has only grown stronger. A campaign of vilification was launched against Modi by the Congress in 2013 which saw him as an existential threat. It was now that the mainstream media lost the plot. A large section had been co-opted by the Congress and by 2013 was fully embedded into its ecosystem.

Some Indian television networks are so viscerally anti-Modi today that they no longer attempt to hide their bias beneath a veneer of journalistic professionalism. The charge of being an in-house channel of the Congress does not bother them anymore…”

Combine this with the rise of a flurry of well-funded left-liberal digital media outlets like The Wire, Scroll, Newslaundry, Newsclick, Quint, Quartz, Citizen etc., all of which are viscerally anti-Modi and anti-Hindu, compared to the handful of sites on the opposite end of the spectrum offering a balanced view, and the reality will become clear.

It is not only a deep-seated hatred for PM Modi but also that for BJP that dictates mainstream media reporting; the hatred is so deep that even more neutral outlets like ANI or IANS have been conditioned to play by the ‘secular’ playbook and implicitly paint BJP/RSS as majoritarian organisations and hence deserving of abuse and physical attacks. In fact, it is this bias that causes crimes in Congress or UPA ruled states to be under-reported or worse totally buried by the national media. Even horrific cases of sexual assault get a free pass from the national media as long as it isn’t a BJP ruled state.

As one of the pillars of democracy, media is supposed to report facts and not resort to taking sides. Words such as allegedly, supposedly, etc have no place in media vocabulary when the case is as clear as daylight.