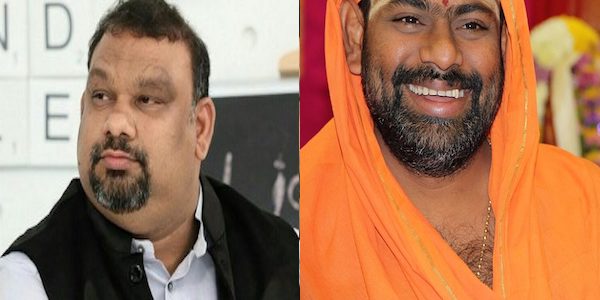 The recent externments of a Telugu film critic for abusing Bhagwan Ram and Mata Sita and of a Swamiji who protested against the derogatory remarks, is yet another example of the secular state’s double standards while dealing with anti-Hindu hate speech. A public figure who insulted Hindu Gods and Hindu sentiments got away with the simple punishment of being banished from a city, and the same punishment was meted out to a Hindu religious leader who was branded ‘communal’ for speaking up against the hate speech.

The infamous film critic from Telugu Film Industry, Kathi Mahesh, was recently accused of using a derogatory term for Bhagwan Ram. As reported in The Times Of India, in multiple interviews, he had called Shri Ram ‘dagulbhaji‘ that loosely translates to ‘scoundrel’. He had also said that ‘Sita would have been better off with Ravana.’ After his comments led to a furore and pressure mounted on the Telangana government, he was externed (banished) from Hyderabad for 6 months under Telangana Prevention of Anti-Social and Hazardous Activities Act of 1930 and sent to his native place of Chittoor in Andhra Pradesh.

Would the police-administration have given a similar soft punishment of just six months of banishment if Mahesh had insulted Mohammed or Jesus? We just need to look at how Kamlesh Tiwari was locked up in jail for almost an year under the stringent NSA for allegedly making objectionable remarks against the prophet of Islam, to get out answer.

Telugu film actor Naga Babu took to social media to express his anger on Kathi Mahesh’s statement. He slammed Mahesh on his Facebook page, saying, “It is time for all the Hindus to raise their voice against those attacking Hinduism, Hindu gods and culture.. Look at this fellow, he should go to jail for talking about Sri Rama abusively. We are useless if we don’t stand up when our culture & religion is attacked (sic),” as per a report in The Times of India.

But following the standard template used by all Hinduphobes, Kathi Mahesh has played the victim card. He said that Naga Babu has insulted him since he is a Dalit and that he should be booked under the SC/ST Act.

Earlier also, Kathi Mahesh had been in news about his sensational comments on Telugu film actor turned politician Pawan Kalyan. It would be easy to dismiss Kathi Mahesh as just another attention-seeking page 3 celebrity, but such anti-Hindu hate can only be ignored at one’s peril. Hindus are one of the most demonized and persecuted communities in the world, even more so than Jews today – casual hate speech like the type indulged in by Kathi Mahesh and others provides intellectual validation for physical and cultural assaults by the globally connected anti-Hindu forces like Islamists, missionaries etc.

As is the trend in Bharat, anyone insulting Hindu Dharma generally gets away easily. So did Mahesh.

In the same case, one more person has been banished from Hyderabad –  Swami Paripoornananda. He is a renowned Hindu sadhu and leader in Telangana and Andhra Pradesh, who has worked for the upliftment of distressed Hindu communities and has fought against Christian evangelism.

The reason for Swamiji’s banishment is that he protested against Kathi Mahesh’s comments on Shri Ram and had also demanded his arrest. He had called for a padyatra to protest against the same for which the permission was initially granted to him by the authorities. Later, when he was going to begin the yatra, police detained him and put him under house arrest. After 2 days of house arrest, even he was externed for 6 months. As reported in The Hindu, the police cited instances of past public speeches made by Swamiji, alleging that they amounted to provocative acts. 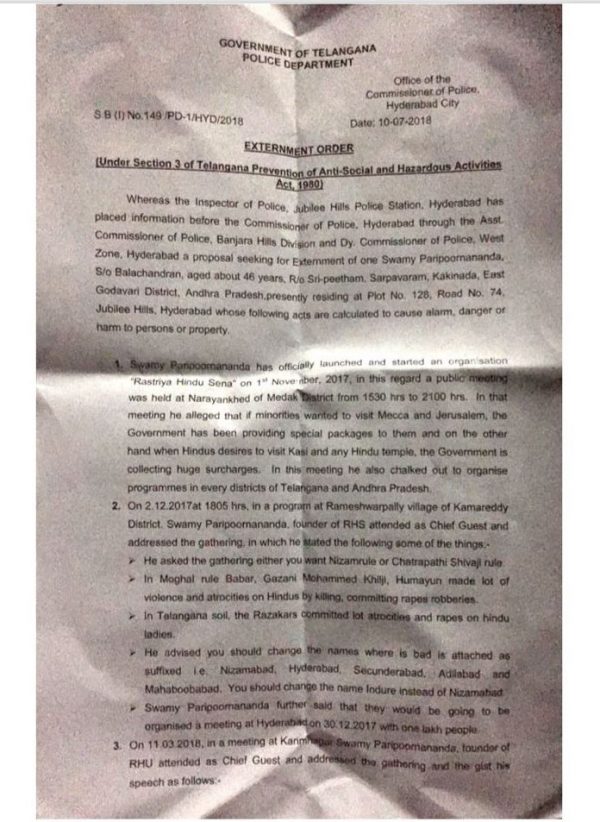 As a matter of fact, the speeches referred by police were made in 2017, wherein Swamiji raised the question that if minorities wanted to visit Mecca or Jerusalem, the Government has been providing special packages to them, but no such assistance is provided to Hindus desirous of visiting Kashi and any other Hindu pilgrimage spot.

In another program held in 2017 under the aegis of the ‘Rashtriya Hindu Sena’ organization founded by him, Swamiji had raised questions like whether people want Nizam rule or Chatrapathi Shivaji rule. He also spoke about atrocities committed against Hindus by Mughals, Razakars etc. Citing these speeches as ‘inflammatory’, police banished Swami Paripoornananda and deported him to Kakinada in Andhra Pradesh.

Kathi Mahesh is one recent example of a known public face speaking ill of Hindu Dharma. In the past also there have been several cases wherein public figures have openly insulted Hindu Dharma:

There are many such cases wherein Hindus are openly mocked for their beliefs and culture, by these elite self-appointed intellectuals. A perfectly crafted propaganda is run by English-language media and the liberal intellectuals to mock Hindu festivals and symbols. When confronted, the same people call Hindus regressive and intolerant.

The question is – does being in majority means Hindus should indulge those who hate them and sit quietly without protesting against such public insult of their faith?

If it was about insulting the ideals and symbols of other religions like Islam (the infamous Charlie Hebdo shootout in France) or Christians (huge debate on intolerance in Bharat over some random hooligans breaking Mother Mary’s idol in Delhi), the media, local administration and law takes its course quickly. The anti-Hindu cabal even justifies followers of Abrahamic religion resorting to violence under pretext of ‘hurt sentiments’. But when it comes to Hindu Dharma, the legal route itself takes a lot of time, while instant confrontation over social media is also criticized as ‘trolling’.

If nothing else is left, then the accused plays the victim card of being a Dalit or minority so well that he/she gathers all the sympathy of these elitists. This has the added benefit of driving a further wedge between Dalit Hindus (SC/ST), who are actually some of the most ardent & practising Hindus to be found in the country, and others by hijacking the whole issue as one of a ‘Dalit being victimised’ while the original insult to Hindus is conveniently glossed over.

The truth is that people like Kathi Mahesh and Kanch Ilaiah are no representatives of Dalits – they have abandoned Dharma for good and have either converted to supremacist Abrahamic belief systems, or are driven by personal agendas and political ideologies like communism, liberalism, Dravidianism etc that are grounded in anti-Hindu venom.