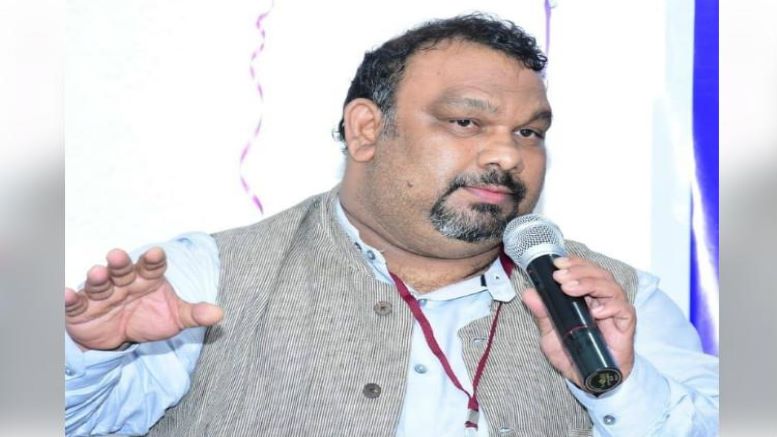 Mahesh Kathi is a Telugu film critic and actor who is no stranger to controversies and definitely not a stranger to anti-Hinduism. He is one of those liberals who hates Hindu Dharma and confidently spreads lies about Hindu religious scriptures and Hindu Gods. In a ‘save constitution’ gathering following the passing of CAA he showed his rabid Hindu hatred once again. While ignorance is one thing, ignorance with arrogance and hatred is quite another.

While speaking at the said meeting he made a few absurd statements (possibly to gain brownie points with Hindu baiters and jihadis). According to him Valmiki Ramayana is just another ‘poem’ (Kavya) and Tulsi Ramayana was written in the medieval ages when the country was under Islamic domination. He further states that Tulsi Ramayana was written with the sole purpose of showing Muslims in bad light and making Hindus seem civilised people.

For this exclusive purpose they made Sri Ram an ‘Ekapatnivrat’ (dedicated to one wife) because Muslims are allowed to marry multiple times. He also said that Valmiki Ramayana mentions that Sri Ram used to consume non-vegetarian food. Not only that but he also had a harem where there were several women for his physical pleasure.

In the same speech he says that present day Hindus (read right wingers) do not read actual Hindu scriptures but those which have been written only for their defence and which show Muslims in bad light. He cites the example of his family to say that Hindus are liberals and it doesn’t matter which God they worship. He says ‘Hindus worship anybody and everybody’ and there is nothing wrong if we worship even Jesus or Allah like his mother does.

He ends his speech by saying that liberals should unite in all forums and fight PM Modi and HM Shah who are trying to take away their constitutional rights. More people should come together all over the country in a bid to save the constitution.

Mahesh Kathi is no stranger to controversy and was already banned once by the Hyderabad police who externed him from entering the city for six months under the Telangana Prevention of Anti-Social and Hazardous Activities Act, 1980 for making controversial statements against Sri Ram and Devi Sita. Back then, he had called Sri Ram ‘dagulbhaji‘ (loosely translates to ‘scoundrel’) and also that ‘Sita would have been better off with Ravana.’

People like Kathi know that if they appear confident while lying then it is easy to fool people and since Hindus hardly read their own scriptures it is easier to fool them. I’m going to quote just one shloka from Valmiki Ramayana to puncture his ‘agenda ridden remarks’.

People have heard his name as Rama, who was born in the race of king Ikshvaku, having steady nature, possessing incomprehensible prowess, self-effulgent, self-commanding and subjecting senses under his control.

It would be better if these self-appointed liberals do a bit of reading themselves and remove the cloud of ignorance & bigotry clouding their minds. They dare not utter a word against Abrahamic religions because they know their heads will be on the chopping block, quite literally. It is time Hindus slap such people with multiple FIRs under Section 153 and 295 and force the authorities to act, because our tolerance is being taken for granted by these hate peddlers.