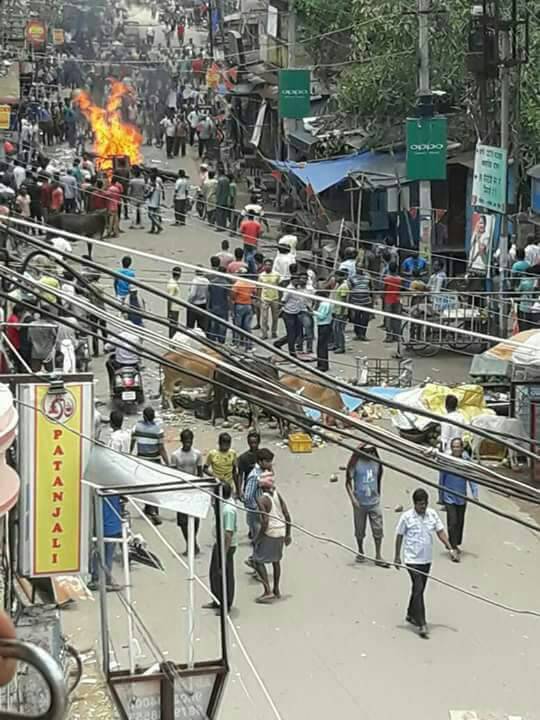 In what is being seen as retaliatory violence after one Nishan Ali was detained by police for pro-Pakistan comments on Facebook during the recent Champion’s Trophy cricket match, many Hindu establishments and property were attacked on Saturday in Purulia town of West Bengal.

As per this report, several shops, stalls and bikes were ransacked and few of those were set on fire, mostly in Chowk Bazar area of Purulia town. There are reports of few persons being injured in the violence too. A heavy police contingent and Rapid Action Force [RAF] has been deployed in the area – police claims the situation is now under control.

This india.com report in Bangla language sheds more light on the sequence of events –

“On the day of the Bharat-Pakistan match in ongoing Champions Trophy cricket tournament (4 June), a young man (Nishan Ali) made a Facebook against Bharat and publicly supported Pakistan. After that, some Bajrang Dal members complained to the police. The police detained the accused and released him after 3 days.

After his release, three leaders of the Bajrang Dal were attacked in their house by stone pelters. A crowd gathered in the local police station to demand the arrest of Bajrang Dal members. The crowd chanted ‘Pakistan zindabad, India murdabad’ (Long live Pakistan, death to India) slogans.

MSM censors or distorts Purulia riot as clash over religion

MSM appears to have largely ignored this news, which is not surprising given the liberal aversion to reporting any news which they believe will hurt the ‘secular’ cause and ‘reinforce stereotypes about the Muslim community.’

Most of the MSM suppressed the news of communal riot at Purulia today. Only ETV Bangla covered a bit of it.https://t.co/vgqriNFRIt

The hard-left leaning newspaper The Hindu has reported it as a ‘clash between two groups over social media posts that allegedly hurt religious sentiments.’ Unless The Hindu is claiming that pro-Pakistan comments and slogans like ‘Pakistan zindabad, India murdabad’ are offensive only to Hindus and not all citizens of Bharat, we don’t know how they arrived at the conclusion that the clash occurred over hurt religious sentiments.

This riot in Purulia is a clear case of anti-nationals venting on ordinary citizens when their anti-national taunts and jibes were not taken lying down.

The Mamta Banerjee Government in WB and state police have a history of either denying communal disturbance altogether or blaming RSS outfits for ‘stoking tensions’.

In Purulia, a senior district police official said there had been “a law and order situation” while a local police official downplayed the whole incident, saying, “Two local groups engaged in a skirmish with each other over a local issue. Our force brought the situation under control very fast. No particular community or communities was/were involved in the incident as the issue was not religious.”

West Bengal has witnessed a spate of riots in recent years, as CM Mamta Banerjee has wooed hardline Islamist radicals to bolster her votebank. 2 months back, Ram Navami processions across the state were attacked by Muslim extremists, while major riots had broken out in Dhulagarh last year.

Muslims constitute 27% of the total population of West Bengal, but in Purulia district their population share is only 7.7% as per Census 2011.

The issue was widely discussed on social media yesterday, and here are some of those reactions –

Brother studying at PGEC.Transformer burnt leaving students without electricity during sems. Can't stay in lodge coz of riots in Purulia.