Incidents of looting of Hindu shops, attack on Hindus with choppers, heavy stone pelting and arson during Eid-e-Milad ‘celebrations’ have been reported from at least 5 different places in West Bengal, Maharashtra and Karnataka. Eid-e-Milad-un-Nabi commemorates the birth and death anniversary of the prophet (nabi) of Islam.

Hindu shops looted, burnt at Dhulagarh,Howrah by Muslims who are reportedly continuing Milad-ul-Nabi celebration even today. RAF is deployed pic.twitter.com/2YhsXJHZpO

We spoke to Prasun Maitra, activist with human rights group Hindu Samhati, who provided more details on the attack on Hindus in Dhulagarh, Howrah. Eid-e-Milad fell on Monday, 12 Dec, this year, but some Muslims were carrying out a celebratory procession playing loud DJ music on Tuesday (a day later). When local Hindus who were carrying out pooja for Margashirsha Purnima objected to this, a large Muslim gang soon gathered and looted and burnt 3 Hindu shops. Similar disturbance has been reported from Mallarpur, Birbhum district as well.

Here are some images of the affected sites in Dhulagarh, Howrah provided by Hindu Samhati – 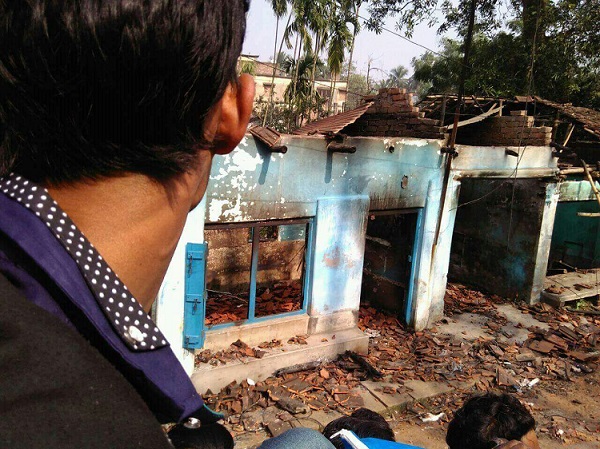 In Maharashtra, riots broke out in Malkapur, Buldhana district following an illegal bike rally taken out on the occasion of Eid-e-Milad. As per this report –

“Buldhana district administration lifted curfew in communal riot hit Malkapur on Tuesday morning. However, other than some medicine shops, most shops were closed. Meanwhile, police have arrested 83 persons and registered cases against about 1,500 unknown persons.

After the initial outburst, there were no signs of violence on Monday, however two trucks parked on Nandura Road were torched, following which, there were reports of some tension in the area on Tuesday morning. The Dasarkhed MIDC police registered a case after that.

The town had witnessed tension between two communities following an illegal motorcycle rally taken out on the occasion of Eid-e-Milad. Some persons including MLA Chainsukh Sancheti, municipal council president Harish Rawal, deputy superintendent of police Rajesh Salunkhe and others were injured in the stone pelting.

Sancheti had blamed police superintendent Sanjaykumar Bawiskar for the communal riots as he had given permission to the procession against the MLA’s advice.”

In Karnataka, clashes were reported from Hosapete, Bellary district and Gangavathi, Koppal district. Nearly 70 people have been injured, 15 two-wheelers, eight petty shops, and four goods carrier vehicles have been damaged in the violence.

Media goes into overdrive when a fasting Muslim catering supervisor employee is allegedly force-fed rotis by irate Shiv Sena MPs, and the issue rocks Parliament and invites condemnation from all parties. But Hindus at the receiving end of repeated attacks and provocations by Muslim fanatics across the country, does not even elicit a murmur from anyone?

Rather than report events factually and raise the question of why Muslim fanatics clash violently with Hindus, Jains, Sikhs and other Dharmics on a regular basis, media prefers to report feel-good stories of Hindus in Kerala distributing sweets to Muslims on Eid-e-Milad as ‘proof’ of  religious harmony. The idea is to keep Hindus clueless about the ground reality, while continuously shaming them for their festivals, customs and beliefs.

Mamta Banerjee has time to spew invective at the Central Government & Army for doing routine checks at toll plazas, but she is silent when the ‘majority’ community in her state is repeatedly targeted?

While it would be wrong to compare the situation in West Bengal where Hindus are routinely persecuted, to Maharashtra & Karnataka – the fact remains that Muslim fundamentalism & violence is brazen in a ‘secular’ TMC-ruled WB, ‘secular’ Congress-ruled Karnataka and ‘communal’ BJP+Shiv Sena-ruled Maharashtra. No part of the country is untouched by this menace.