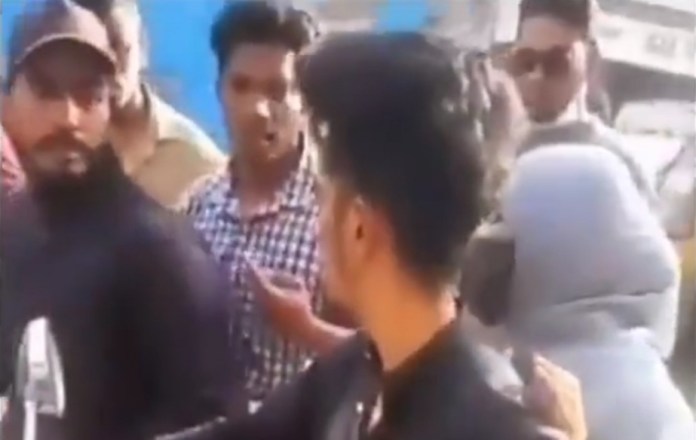 Another Hindu man has been assaulted by Muslims for travelling with a Muslim woman. This is the third incident in a row in the last few days. Last week a Hindu man was attacked in Nizamabad for the same reason. The man was manhandled by a mob after a Muslim man stopped the vehicle to inquire why he was travelling with a girl of their community.

Times Now reported that a Hindu man was stopped by a Muslim man when he was travelling with a Muslim woman in his two-wheeler and a mob of Muslims attacked him. As per the information provided by DCP, West Zone, Hyderabad the incident happened three days ago. It came to the attention of police after the video of the man being assaulted surfaced in the media.

Some of the assailants have been identified and arrested by the police. They have booked them under relevant sections of IPC and are on the lookout for others involved in the incident. Only a few days ago, a Hindu man riding on his bike with a burqa clad woman was stopped by a Muslim mob and manhandled by them in Bhainsa, Nizamabad.

He was kidnapped and retained for hours till the woman’s brother went and explained that he had allowed him to take her sister. Similarly, in Bengaluru another Hindu man giving ride to his female Muslim colleague was stalked and attacked by 2 Muslim men. The woman and her husband were abused by the men who said “We are asking you all to not go out with these motherf**ers. What will people say after seeing a woman in burqa riding like this?”.

Clearly, it seems that a fatwa has been issued to be vigilant about Muslim women travelling with Hindu men. However it is unsuspecting Hindu men who face physical abuse simply for lending a helping hand. Similar to how liberals eagerly dismiss Love Jihad, they’ll dismiss these incidents as rare ones. But they’ll continue to slander it as moral policing and mob vigilantism when the Hindu organisations look out for our daughters trapped by jihadis in the name of love.